The asteroid that killed the dinosaurs 66 million years ago might have mobilized an existing volcanic system, causing vast lava flows. 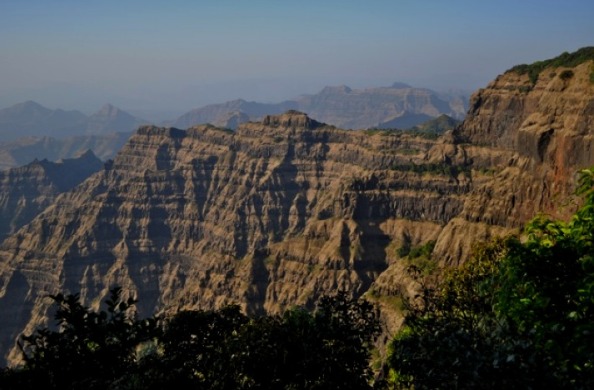 An area in the Deccan Traps, via Gerta Keller.

The Deccan Traps in India – between 17°–24° North and 73°–74° East – are a place where you can find layer upon layer of solidified rock. This region is thought to have been the site of extremely powerful volcanic activity in the past, so powerful that it caused mile-deep lava over an area as large as the state of California. Last week (April 30, 2015) geophysicists at UC Berkeley announced their evidence that this vast region is related to the asteroid thought to have slammed into the ocean half a world away. The impact near Chicxulub, Mexico – 66 million years ago – is believed by many researchers to have killed the dinosaurs and ushered in the age of mammals. The Berkeley researchers say the impact probably “rang the Earth like a bell,” triggering powerful earthquakes and volcanos around the globe, including those that created the Deccan Traps.

The Berkeley researchers – who published their work online April 30 in the The Geological Society of America Bulletin – cited the “uncomfortably close” coincidence between the Deccan Traps eruptions and the asteroid impact 66 million years ago. Team leader Mark Richards of UC Berkeley said in a statement:

If you try to explain why the largest impact we know of in the last billion years happened within 100,000 years of these massive lava flows at Deccan … the chances of that occurring at random are minuscule. 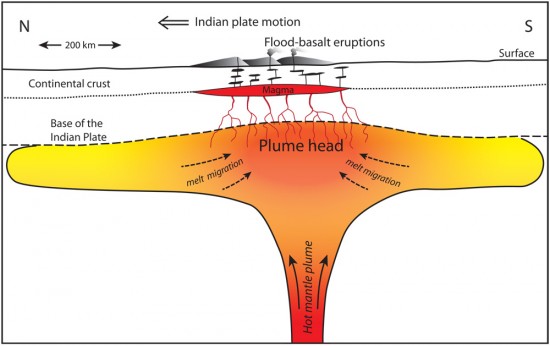 Illustration of a hot mantle plume “head” pancaked beneath the Indian Plate. The theory by Richards and his colleagues suggests that existing magma within this plume head was mobilized by strong seismic shaking from the Chicxulub asteroid impact, resulting in the largest of the Deccan Traps flood basalt eruptions. Image via UC Berkeley

Richards had proposed in 1989 that plumes of hot rock, called “plume heads,” rise through Earth’s mantle every 20-30 million years and generate huge lava flows, called flood basalts, like the Deccan Traps. It struck him as more than coincidence that the last four of the six known mass extinctions of life occurred at the same time as one of these massive eruptions.

Richards teamed up with other experts at UC Berkeley to try to discover faults with his radical idea that the impact triggered the Deccan eruptions. Instead, the team came up with supporting evidence.

Paul Renne of the Berkeley Geochronology Center re-dated the asteroid impact and mass extinction two years ago and found them essentially simultaneous, but also within approximately 100,000 years of the largest Deccan eruptions.

A third co-author on the study, UC Cal Berkeley’s Michael Manga, demonstrated that seismic events like large earthquakes could trigger volcanic eruptions. By Richards’ estimate, the asteroid impact must have generated the equivalent of a magnitude 9 or larger earthquake everywhere on Earth, sufficient to ignite the Deccan flood basalts as well as other places around the globe, including at mid-ocean ridges. Manga said:

It’s inconceivable that the impact could have melted a whole lot of rock away from the impact site itself, but if you had a system that already had magma and you gave it a little extra kick, it could produce a big eruption.

Richards and his team visited India in April 2014 to obtain lava samples for dating, and noticed pronounced weathering surfaces, or terraces, in one area. Geological evidence suggests that these terraces may signal a period of quiescence in Deccan volcanism prior to the Chicxulub impact. Richards concluded:

This was an existing massive volcanic system that had been there probably several million years, and the impact gave this thing a shake and it mobilized a huge amount of magma over a short amount of time.

Bottom line: Vast lava flows in India – known as the Deccan Traps – might have been mobilized into activity by the asteroid impact that killed the dinosaurs 66 million years ago.