Bone structure indicates that it was a juvenile, estimated to be 60 feet (18 meters) long. An adult would have been much larger.

A new dinosaur species discovered in 2008 in northwestern China is now known to be among the largest-known animals to have ever lived on land. It was a sauropod, a plant-eating dinosaur that lived during the early Cretaceous Period, more than 100 million years ago. Paleontologists discussed the discovery and their analysis of it in the January 29, 2014 edition of PLOS One.

Yongjinglong datangi, as this new dinosaur species is called, belonged to a sauropod group known as Titanosauria. As the name implies, they were terrestrial titans, among the largest-known group of dinosaur species to walk on land.

A diagram showing the probable fossil bone placement in an outline of Yongjinglong datangi, with inset images showing details of the back vertebrae. Image credit: Li-Guo Li, et al. via PLOS One. 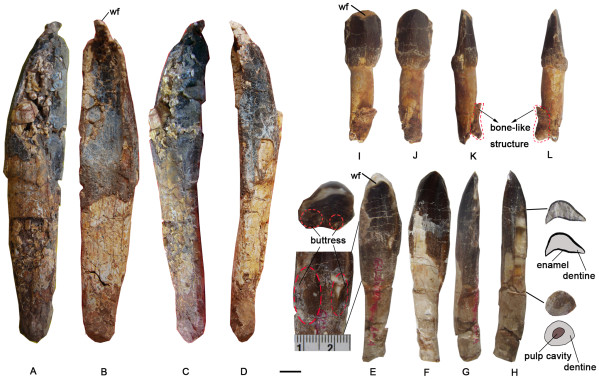 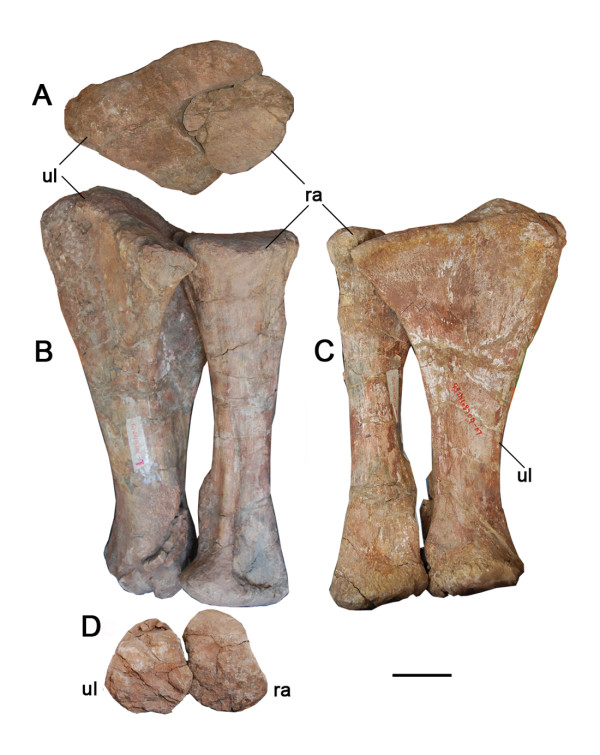 The dinosaur fossils, originally excavated at China’s Gansu Province in 2008, consisted of three teeth, eight vertebrae, and a left shoulder blade. One of the teeth was almost (6 inches (15 cm) long. A right radius and ulna were also found, still bearing grooves and ridges where leg muscles attached to the bone.

Scientists estimated this individual to be about 50 to 60 feet long (15 to 18 meters long). However, fossil scapular bone (shoulder blade) features indicate that it was a juvenile, meaning that an adult of that species would have been even larger.

Explained Li-Guo Li, of the China University of Geosciences in Beijing, in a press release,

The scapula and coracoid aren’t fused here. It is open, leaving potential for growth. 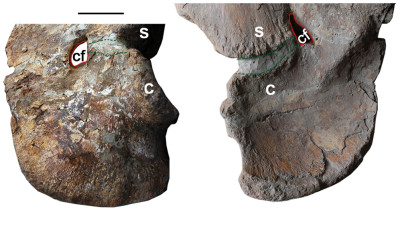 Two sides of the scapula-coracoid (a segment of shoulder bone); areas outlined in green, are not fused, indicating that this dinosaur was a juvenile. Image credit: Li-Guo Li, et al. via PLOS One.

The shoulder blade was very long, nearly 2 meters [6.6 feet], with sides that were nearly parallel, unlike many other Titanosaurs whose scapulae bow outward.

She explained that the only way the shoulder blade could have fit within the animal’s body was at a 50 degree angle from the horizontal, which was unlike the vertical or horizontal placements seen in other types of dinosaurs.

The vertebrae, one from the neck and seven from the trunk, had large hollow sections inside it; in life, these would have been occupied by air sacs in the dinosaur’s body. Peter Dodson, of the University of Pennsylvania and a paper co-author commented:

These spaces are unusually large in this species. It’s believed that dinosaurs, like birds, had air sacs in their trunk, abdominal cavity and neck as a way of lightening the body. 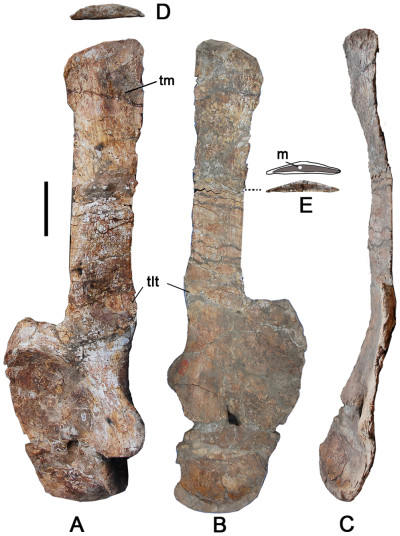 The long shoulder blades, more than 6 feet (2 meters) in length, had to be positioned 50 degrees from the horizontal to fit in the sauropod’s body. In this image, one piece of bone is image from different sides. Image credit: Li-Guo Li, et al. via PLOS One. 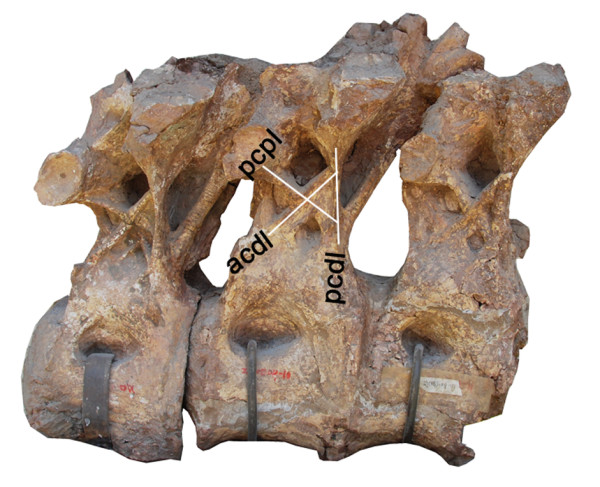 These three connected back vertebrae would have been close to the shoulder blades. Image credit: Li-Guo Li, et al. via PLOS One.

For many decades, the highest diversity of dinosaur species had been found in the United States. By 2007, China had claimed that distinction and new-found fossil dinosaur specimens were showing that sauropods had continued to be a major presence into the early Cretaceous, a finding that could not have been supported by U.S. specimens alone. Said Dodson:

As recently as 1997 only a handful of dinosaurs were known from Gansu. Now it’s one of the leading areas of China. This dinosaur is one more of the treasures of Gansu.

Based on U.S. fossils, it was once thought that sauropods dominated herbivorous dinosaur fauna during the Jurassic [about 200 to 145 million years ago] but became almost extinct during the Cretaceous. We now realize that, in other parts of the world, particularly in South America and Asia, sauropod dinosaurs continued to flourish in the Cretaceous, so the thought that they were minor components is no longer a tenable view.

Bottom line: Fossils discovered in 2008 in northwestern China have been identified as a new species of plant-eating dinosaur. Named Yongjinglong datangi by the paleontologists that studied it, this new species is one of the largest land-dwelling creatures in the history of life on Earth. The fossils are believed to be over 100 million years old, corresponding to the early Cretaceous Period. The discovery of this creature provides increasing evidence that sauropods did not die off in the Jurassic period, but continued to be a significant presence into the early Cretaceous. Details about this new dinosaur were published in the January 29, 2014 edition of PLOS One.