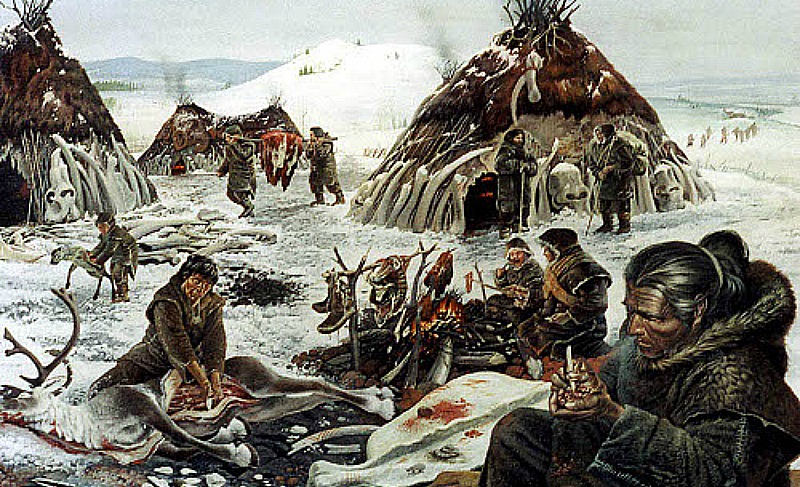 Illustration of an Ice Age village.

A new study by an international team of researchers says that fires started by prehistoric humans – either deliberately or by mistake – might be the reason Europe is not more densely forested today. The research, published November 30, 2016 in PLOS ONE, suggests that, more than 20,000 years before the industrial revolution, humans were capable of making a large-scale impact on Earth’s landscape and vegetation.

During the coldest phase of the last Ice Age, which peaked about 21,000 years ago and ended about 11,500 years ago, hunter-gatherers might have deliberately lit forest fires in an attempt to create grasslands and park-like forests. According to the researchers:

They probably did this to attract wild animals and to make it easier to gather vegetable food and raw materials; it also facilitated movement.

Another possibility is that the large-scale forests and steppe fires may have been the result of the hunters’ negligent use of fire in these semi-open landscapes.

The Ice Age is often presented as an era of extreme cold and snow that was ruled by mammoths, bison and giant bears. But the researchers suggest that humans were also capable of having a significant impact on the landscape. Image via Mauricio Antón/Wikimedia Commons.

For the study, the researchers combined analyses of Ice Age accumulations of silt, and computer simulations with new interpretations of archaeological data. Some previous reconstructions of the vegetation based on pollen and plant remains from lakes and marshland have suggested that Europe had an open steppe vegetation. But new computer simulations based on eight possible climate scenarios show that under natural conditions the landscape in large areas of Europe would have been far more densely forested. The researchers conclude that humans must have been responsible for the difference. Further evidence comes from traces of the use of fire in hunting settlements from this period and in the layers of ash in the soil.

Bottom line: A study published November 30, 2016 in PLOS ONE shows that Ice Age hunter-gatherers throughout Europe, from Spain to Russia, were capable of altering the landscape through their use of fire.

Read more about the study from Leiden University