The Sonic Hedgehog gene drives embryonic development of mammal limbs and shark gills. Could our limbs have evolved from gills? 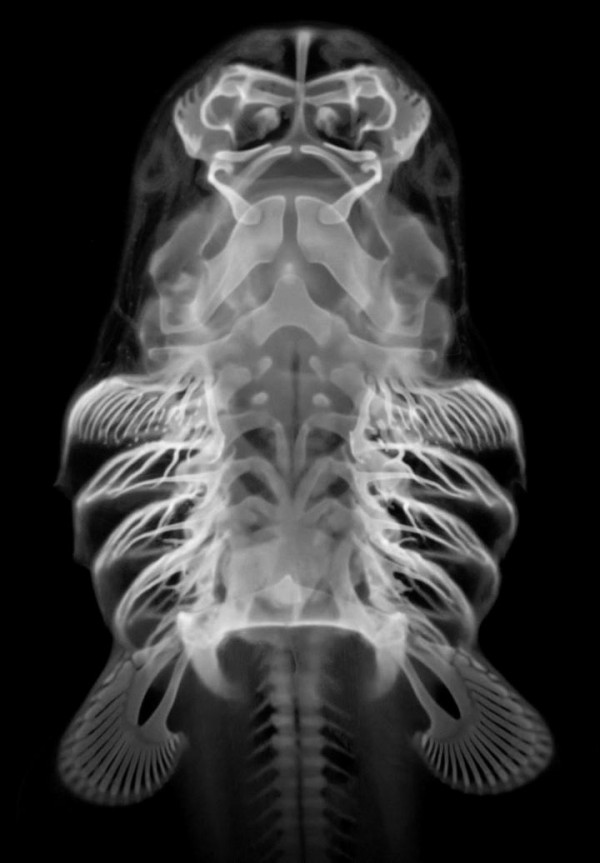 Skeleton of an embryonic bamboo shark, viewed from the underside. Gill arch appendages extend from each side of the head. Directly below them are a pair of fins. Image via Andrew Gillis.

In 1878, German anatomist Karl Gegenbaur suggested that paired human limbs – like our hands and feet – evolved from the paired fins of fish, and, before that, from fishes’ gills. But there was no fossil evidence to verify his theory.

New genetic research indicates that Gegenbaur may have been on the right track. A paper published in April, 2016, in the journal Development reports that the Sonic Hedgehog gene – already known to be essential for embryo development in mammals, such as humans, including the formation of limbs – is also responsible for developing appendages called branchial rays in skate embryos.

Skin flaps that protect the gills of cartilaginous fish – sharks, skates, rays – are supported by arch-like cartilage structures. Protruding from these cartilage arches are the branchial rays.

Dr. Andrew Gillis, at the University of Cambridge and also affiliated with the Marine Biological Laboratory, was lead researcher in this study. He said in a statement:

Gegenbaur looked at the way that these branchial rays connect to the gill arches and noticed that it looks very similar to the way that the fin and limb skeleton articulates with the shoulder.

The Sonic Hedgehog gene, named by a researcher at Harvard Medical School after the Sonic the Hedgehog video game series by Sega, directs the development of paired limbs in mammals. What’s been discovered here is that this same gene also directs the branchial rays, which support the gills of sharks, rays and skates.

The gene’s role in embryonic development of mammals – as well as in sharks, rays and skates that appeared much earlier in the fossil record – suggests that limbs evolved from gill arch appendages.

However, another possibility is that the Sonic Hedgehog gene happens to occur in two very different types of animals and is used for different purposes. Gillis said: 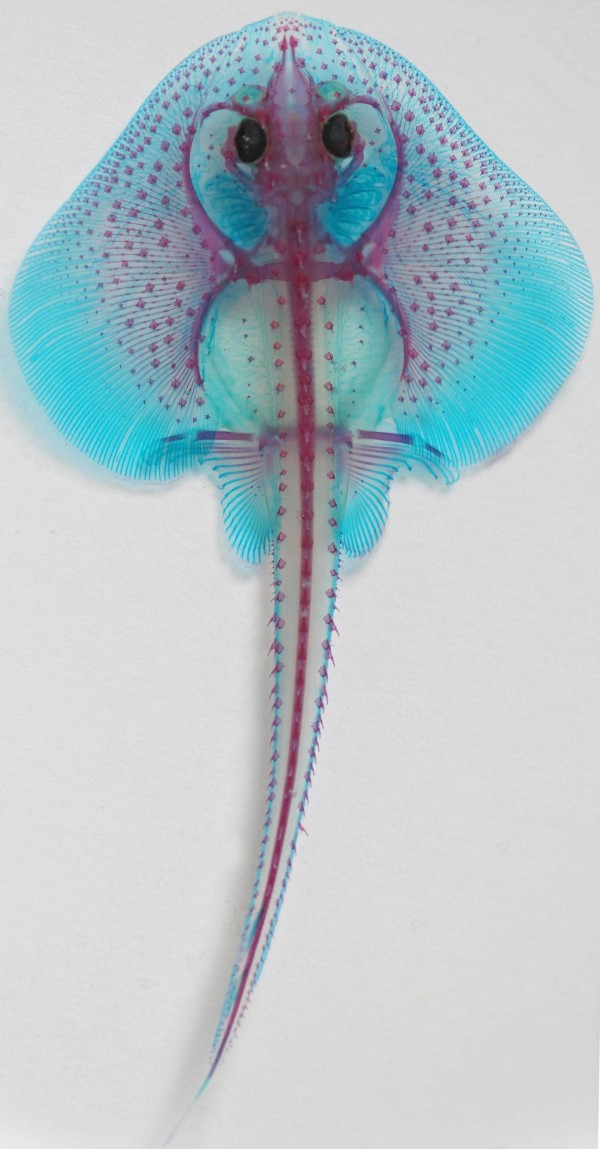 Skeletel preparation of a skate, in the late stage of embryonic development. Image via Andrew Gillis.

Gillis explained that the Sonic Hedgehog gene establishes the axis of a limb early in the development of mammal embryos and continues to guide growth until the limb is fully formed. He said:

Gillis and his team discovered that the Sonic Hedgehog gene functioned similarly in skate embryo branchial ray growth and mammal embryo limb development. They interrupted the gene’s functions at different development phases in skate embryos. When the Sonic Hedgehog gene was inhibited during early growth phases, branchial rays grew from the wrong side of the skate’s gill arches. When it was done at later growth phases, branchial rays developed correctly but were fewer than usual. 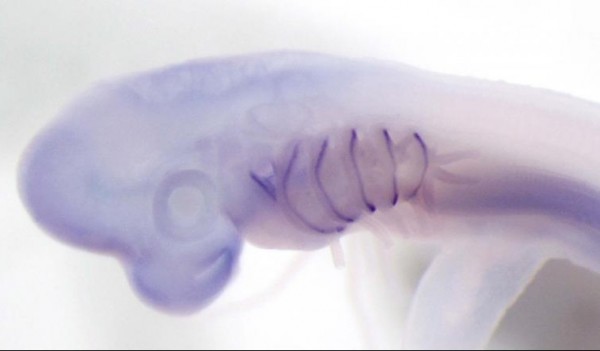 In this image of a skate embryo, dark purple strips running down the length of each gill arch show sections developed by the Sonic Hedgehog gene. Image via Andrew Gillis.

Gillis remarked in his statement:

Taken to the extreme, these experiments could be interpreted as evidence that limbs share a genetic program with gill arches because fins and limbs evolved by transformation of a gill arch in an ancestral vertebrate, as proposed by Gegenbaur.

However, it could also be that these structures evolved separately, but re-used the same pre-existing genetic program. Without fossil evidence this remains a bit of a mystery–there is a gap in the fossil record between species with no fins and then suddenly species with paired fins.

So we can’t really be sure yet how paired appendages evolved.

What we are learning is that many novel features may not have arisen suddenly from scratch, but rather by tweaking and re-using a relatively small number of ancient developmental programs.

The video below shows the embryonic development of a little skate (Leucoraja erinacea):

Bottom line: The Sonic Hedgehog gene drives embryonic development of mammal limbs and shark gills. Could our limbs have evolved from gills?