There’s evidence Earth was covered by a planet-wide glacier, more than 650 million years ago. But how did Earth thaw out again?

Snowball Earth is a theory suggesting that – more than 650 million years ago, for up to millions of years at a time – Earth was entirely smothered in ice. Ice might have stretched from Earth’s poles to its tropics more than once in our planet’s history. There is geologic evidence suggesting this happened, but scientists have not been able to agree on how a highly reflective ice-covered Earth could ever have thawed out again. That’s why they’ve never entirely accepted the Snowball Earth theory. But on November 13, 2012, the American Geophysical Union announced a study casting some new light on this theory. Scientists studied the heat-trapping potential of clouds above an ice-covered world, which they now say could help explain how a Snowball Earth thawed.

Was Earth ever entirely covered with ice and snow? Proponents of the Snowball Earth theory believe it was. Image via geology.fullerton.edu.

Dorian S. Abbot at University of Chicago led this team of scientists from the U.S., Germany and France. They used a series of global general circulation models, the same sorts of models used to study global warming in our time.

Previous modeling had suggested that – to thaw out a glacier covering the entire Earth – Earth’s atmosphere would need to consist of at least 20% carbon dioxide, a greenhouse gas, by volume. This amount of carbon dioxide could have trapped enough heat near Earth to thaw an entire world.

But chemical evidence from ancient rocks doesn’t support this idea. This evidence suggests that carbon dioxide levels reached only 1 percent to 10 percent during the time periods often suggested for the Snowball Earth. The time periods looked at by this team were during the Neoproterozoic (524 to 1,000 million years ago) and Paleoproterozoic (1,600 to 2,500 million years ago). 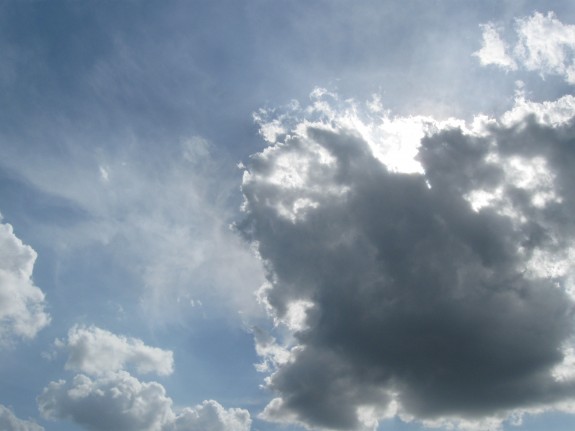 Now back to global general circulation models. In these sorts of computer models, the role of clouds has been challenging to understand, because clouds both trap heat near Earth’s surface, warming the planet, and also reflect incoming sunlight, cooling the planet. In our modern warming climate, both effects are important, and clouds are often cited as a reason global climate models can’t do more than project a range of possibility for future temperature rise. On a Snowball Earth, though, say these scientists, clouds would have played a different role.

In other words, these scientists suggest that – set against a planet encompassed in ice – the reflectivity of clouds is not so important. They say that, on a Snowball Earth, the overall effect of clouds would be to warm the planet.

By accounting for the heat-trapping effects of clouds, the authors found that the atmospheric carbon dioxide concentration required to drive deglaciation is 10 to 100 times lower than previous research suggested, a concentration that fits within observed levels.

Bottom line: Scientists used a series of global general circulation models to study the Snowball Earth theory, the idea that Earth was covered by a planet-wide glacier one or more times in its history, more than 650 million years ago. They determined that clouds might have helped warm the Snowball Earth, ultimately leading to a global thaw and conditions more like what we experience today.