Did all dinosaurs have feathers?

A newly-discovered species suggests that feathers were much more common among dinosaurs than once thought. 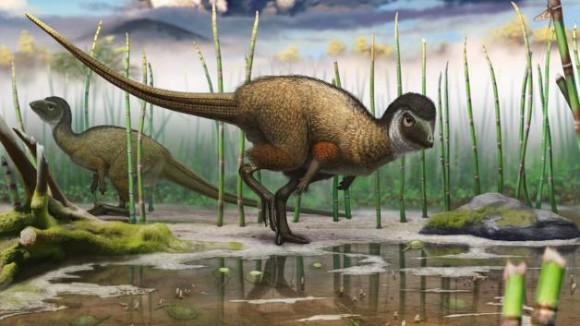 The first ever example of a plant-eating dinosaur with feathers and scales has been discovered in Russia. Previously only flesh-eating dinosaurs were known to have had feathers so this new find indicates that all dinosaurs could have been feathered.

The new dinosaur, named Kulindadromeus zabaikalicus as it comes from a site called Kulinda on the banks of the Olov River in Siberia, is described in a paper published July 24 in Science.

Kulindadromeus shows epidermal scales on its tail and shins, and short bristles on its head and back. The most astonishing discovery, however, is that it also has complex, compound feathers associated with its arms and legs.

Birds arose from dinosaurs over 150 million years ago so it was no surprise when dinosaurs with feathers were found in China in 1996. But all those feathered dinosaurs were theropods, flesh-eating dinosaurs that include the direct ancestors of birds.

This discovery suggests that feather-like structures were likely widespread in dinosaurs, possibly even in the earliest members of the group. Feathers probably arose during the Triassic, more than 220 million years ago, for purposes of insulation and signaling, and were only later co-opted for flight. Smaller dinosaurs were probably covered in feathers, mostly with colorful patterns, and feathers may have been lost as dinosaurs grew up and became larger.