This Octomom was observed to set a new record – 53 months – for the longest brooding period of any known animal.

The video above, from Monterey Bay Aquarium Research Institute (MBARI) in California, tells the story of the creature scientists have dubbed “Octomom,” a deep-sea octopus observed to guard her eggs for nearly 4.5 years. It’s the longest egg-brooding period of any known animal.

Bruce Robison of MBARI and colleagues used a remote-operated vehicle to explore 1,397 meters (4,583 feet) down in the Pacific, in a submarine canyon near Monterey Bay. They returned 18 times over a period of years, and each time observed a female octopus (Graneledone boreopacifica) guarding her clutch of 155 to 165 eggs. Throughout this time, the female slowly starved to death while she kept the eggs clean and kept the eggs safe from predators. Ultimately, the eggs hatched, and the mother octopus died.

The scientists reported these results on July 30, 2014 in the journal PLOS ONE. They wrote:

This amazing feat represents an evolutionary balancing act between the benefits to the young octopuses of having plenty of time to develop within their eggs, and their mother’s ability to survive for years with little or no food. Although long-term observations of deep-sea animals are rare, the researchers propose that extended brooding periods may be common in the deep sea. Such extended life stages would need to be taken into account in assessing the effects of human activities on deep-sea animals. In any case, this strategy has apparently worked for Graneledone boreopacifica — it is one of the most common deep-sea octopuses in the northeastern Pacific. 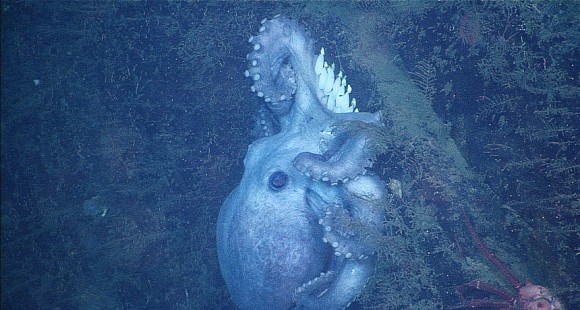 A deep-sea octopus with her eggs on a rock face in the Monterey Submarine Canyon, observed by scientists again and again over near 4.5 years, until September 2011. Image via Monterey Bay Aquarium Research Institute.

Bottom line: This octomom was observed to set a new record – 53 months – for the longest known brooding period of any animal.