On February 20, 2013, Death Valley National Park earned designation as an International Dark Sky Park for its pristine views of the starry nighttime sky.

Places where you can view the Milky Way in its full splendor are becoming rare. Death Valley, long known to be one of the hottest and driest places on earth, is now certified as one of the world’s darkest places too. On February 20, 2013, the International Dark Sky Association and the U.S. National Park Service announced that Death Valley National Park has been designated as an International Dark Sky Park. Death Valley received the highest “gold tier” rating due to its pristine starry skies and the park’s efforts to reduce excessive outdoor lighting and promote stargazing opportunities.

Death Valley National Park, located in the states of California and Nevada, encompasses 3.4 million acres of diverse desert landscape. The park is composed of salt-flats, sand dunes, rugged canyons and towering mountain peaks. It is a land of extremes, and temperatures routinely soar into the triple digits during the summer months. A record-breaking high air temperature of 134°F (57°C) was recorded at Death Valley on July 10, 1913.

Astronomers have been visiting the world-class park for decades to view the night sky. A full array of nighttime phenomena can be seen from the park including the Milky Way, faint meteors and zodiacal light.

Zodiacal light is glowing pyramid in west after dark

Death Valley received the highest “gold tier” rating from the Dark Sky Places program due to its pristine starry skies and the park’s efforts to reduce excessive outdoor lighting and promote stargazing opportunities. Excessive outdoor lighting can degrade astronomical observations, waste energy and disrupt the activities of animals and ecosystems.

Jonathan Jarvis, Director of the National Park Service, commented on the new certification in a news release. He said:

Death Valley is a place to gaze in awe at the expanse of the Milky Way, follow a lunar eclipse, track a meteor shower, or simply reflect on your place in the universe. We greatly appreciate the International Dark-Sky Association certification. It illustrates the park’s commitment to protect natural darkness and supports the wider mission to protect nightscapes in the entire National Park System. As the world becomes more urbanized, the value of a starry sky only increases and our ability to offer visitors these incredible experiences is an integral part of the National Park Service mission to preserve our nation’s most cherished places for this and future generations. 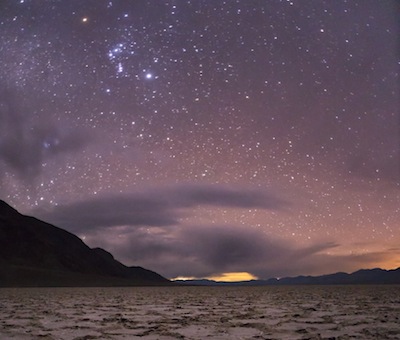