A week-long cold wave has hit Europe, with over 200 dead. While most of U.S. has been mild in winter 2012, heavy snowfall hit in Colorado, Kansas, and Nebraska.

While most of the United States has been mild for most of winter 2012, other parts of the world have had to deal with significant cold temperatures and heavy snowfall. A week-long and still persisting cold wave has hit Europe. Very cold temperatures below zero have killed 223 people in Europe alone, and that count could grow as the cold air looks to remain in place this weekend and for parts of next week. Meanwhile, in the United States, a significant snow storm developed around Colorado, Kansas, and Nebraska. It has brought over two feet of snow in some areas. Will the parts of the U.S. experiencing a mild winter soon see these cold temperatures seen in Europe?

In Europe, at least 223 people have died from the extreme cold temperatures. Ukraine is reportedly the biggest hit area with nearly 100 deaths in the country. Most of these deaths were due to people being homeless and not having a place to stay warm. In Kyiv, Ukraine, temperatures dropped to -27 degrees Celsius (-17° Fahrenheit). Nearly 1,600 residents in Ukraine alone have been hospitalized due to hypothermia and frostbite. The cold air has pushed significant south, and areas in Venice, Italy has their canals begin to freeze. Many people were found dead in streets in a few countries. The Czech Republic had a record low temperature of -38.1°C. Rome, Italy saw accumulations of snow in some areas, which is a rare occurrence for the city. In fact, the snowfall recorded in the city was the biggest snowfall in 26 years. Nearly eight inches (20 centimeters) fell in Rome, which shut down the Colosseum, stranded motorists, and brought trees falling on cars due to the heavy weight of the snow. In Bosnia, the local government declared a state of emergency for the capital in Sarajevo. More than three feet of snow (one meter) fell in Sarajevo, and nearly 60,000 people were cut off by the snow.

In the United States, impressive snow amounts occurred in parts of Colorado, Nebraska, Wyoming, and Kansas. Here are a few snowfall totals: 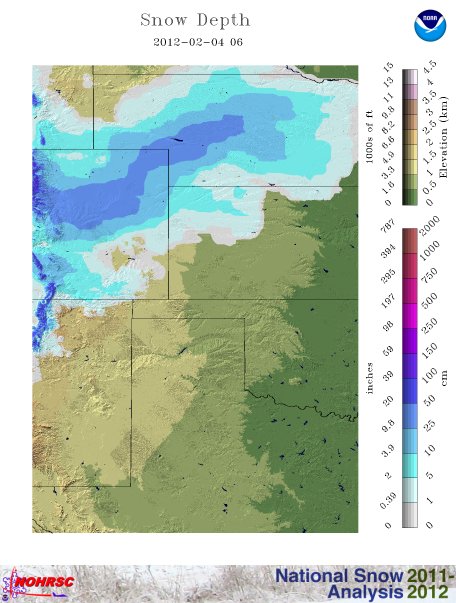 Bottom line: Cold temperatures spread westward from Russia and pushed into parts of Europe. Nearly 223 people have died from extremely cold temperatures, with the Ukraine hit hardest. The cold wave is expected to continue this weekend and into early next week with temperatures at least 20 degrees below average. Across the United States, Colorado, Wyoming, and Nebraska were hit with very heavy snow. Many snowfall records were broken at Denver International Airport and some mountainous areas saw over three feet of snow. For the lower 48 of the United States, the weather models are still jumping all over the place with cold temperatures and possible storms. If anything is consistent, it does appear that some cold air will invade the eastern United States come mid-February, and as soon as late next week (prior to Valentine’s Day). There remains high uncertainty in the forecasts due to North Atlantic Oscillation (NAO) forecasts. It seems like every model run is unsure whether or not the NAO will drop negative or pull positive during this time frame. If the NAO becomes negative, it could make for some interesting times across the eastern United States. If this is true, perhaps that silly groundhog, Punxsutawney Phil, will be correct about six more weeks of winter!