A sizable portion of wild guppies were fathered by a dead fish.

I know what you’re thinking, but this isn’t a sordid tale of necrophilia and sexual cannibalism. It’s a heartwarming story about fatherhood, an institution so vital, so noble that some males still accomplish the feat long after they’ve shuffled off this mortal coil. Case in point – the Trinidadian guppy (Poecilia reticulata). While you might get a little more mileage out of their aquarium-dwelling cousins, wild guppy males are lucky if they last even one year. Yet, impressively, some sire offspring after being dead for longer than they’ve been alive.

Credit for this achievement shouldn’t go entirely to males. Female guppies are living sperm banks, equipped with receptacles in their ovarian cavities that can store the spoils of multiple matings for future use. Of course, the mating style is also key. Guppies reproduce through internal fertilization and give birth to live young rather than tossing their gametes into the water like most fish. (So don’t try this at home, spawning species, as it will totally not work for you.)

Guppies aren’t the only species capable of storing sperm. Other aquatic animals have also managed to pull it off, as have some reptiles, amphibians, and social insects. Scientists knew that guppies were engaging in this kind of sperm banking – in captivity females had been observed to produce offspring long after their male companions were removed from the tank – but they wanted to find out how common post-mortem fatherhood was in the wild.

To do this, an international team headed by Andres Lopez-Sepulcre introduced guppies into a tributary of the Guanapo River in Trinidad. The experimental guppies (38 males and 38 females to get things started off) were captured as juveniles, raised in the lab, and then set loose in a guppy-free portion of the river that was conveniently bookended by waterfalls to prevent anyone from entering or leaving the experiment – sort of a natural aquarium. The fish were recaptured monthly, along with new generations, and DNA paternity testing was conducted to determine who had sired whom. In their results, published in the latest Proceedings of the Royal Society B, the researchers report that some males fathered offspring more than eight months after their own demise, and that these posthumous babies made up a sizable portion of the emerging population. During the ten months in which the riverbed tank was monitored, the team tallied 540 births. 73 of these (13.5%) were conceived after the fathers had already made their way to Davy Jones’ Locker. And that’s over the whole course of the entire study. Posthumous birth rates rose steadily as more males died off, accounting for about a quarter of new offspring by the last few months. 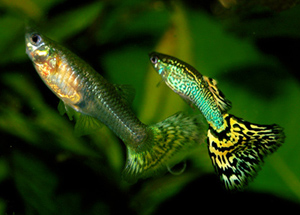 Before you start accusing guppies of being deadbeat dads, consider how little is required to raise a batch of guppy babies. Newborn guppies hit the water running (well, swimming), and after her month long stint of pregnancy, guppy mom is quickly off to mate again. By squirreling away his sperm in as many ladies’ reproductive tracts as possible, the male guppy actually helps both sexes. This is because larger, sturdier female guppies drastically outlive their delicate male counterparts. After their first reproductive event, male guppies can expect to be around for about another three months, whereas females should make it about fifteen months. Over time that creates a pretty skewed male-female ratio (i.e., too many girls, not enough boys). By being able to save some sperm for later, females effectively increase their pool of potential mates. While males extend their reproductive lifespan beyond their biological one.

Basically, a male guppy’s sperm is more durable than he is. Fragile males are prone to perishing during the rainy season. It’s just how they’re built. But once safely cached with a female, their gametes are protected from the elements. This is an unusual spin on the whole “survival of the fittest” pattern. Weaker males that might otherwise have only lived long enough to mate once get a second chance from beyond the grave, and their genes are thus more likely to persist in the population. This could create greater diversity in the gene pool, making guppies more adaptable to environmental changes. And indeed, the species has been shown to have notably fast rates of evolution, though whether this is due to sperm storing or to some other factor can’t be determined from the current study.

But most importantly, you now have something interesting to talk to your own dad about this coming Father’s Day should you happen to run short on conversation topics. You’re welcome.