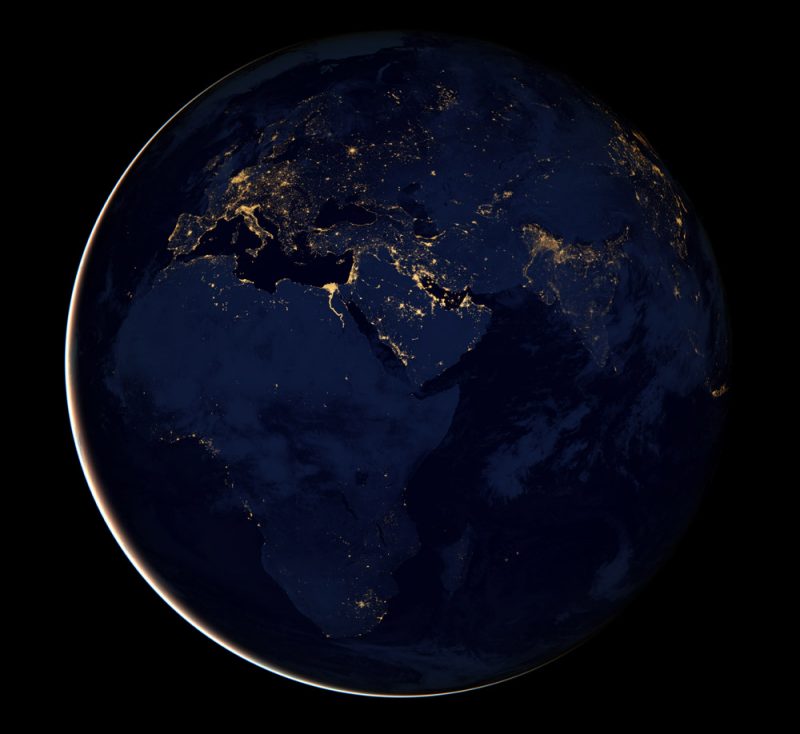 Earth is always half illuminated by sunlight. Notice the crescent of illumination on one edge in this composite image, which is from the Suomi NPP satellite. If you were on the other side of Earth when the images used in this composite were acquired, you’d see Earth shining brightly in reflected sunlight, aka daylight. Image via NASA..

We at EarthSky are receiving questions about the so-called days of darkness supposedly announced by NASA and supposedly coming up November 15-30, 2017.

Did NASA announce it? No.

Will it happen? No.

YouTube videos are suggesting the event will be caused by “another astronomical event, between Venus and Jupiter.” Yes, Jupiter and Venus – the sky’s two brightest planets – had a conjunction low in the east before dawn on November 13. See photos here. It was beautiful! It’s just so wrong to use this conjunction – which has happened countless times in Earth history, to the wonderment of all privileged to observe it – to perpetuate a hoax.

As for the idea that NASA has issued a “1,000-page document” on the event for the White House. Well. That’s just entirely fake.

Think about it. What would have to happen for Earth to experience 15 days of darkness? Our day-night cycle stems from Earth’s rotation on its axis around our local star, the sun. The sun shines on half of Earth for part of its 24-hour period; that’s daytime. Nighttime is simultaneously occurring on the opposite side of Earth.

All of those scenarios are unlikely to the point of ridiculousness, when you consider the vast size of our sun. That’s why zero days of all-Earth darkness have occurred in human history so far.

Let me say it again. It’s never happened. It’s not going to happen.

Oh no, 15 days of darkness. What is a giant magic turtle going to block the son ?https://t.co/iCJbmDDK4b

This same hoax has been rearing its head every few years, since at least 2011, when the erstwhile Comet Elenin was supposed to pass between us and the sun and cause three days of darkness. In 2014, the number of supposed “dark days” increased to six in this article from Hutzlers.com.

In 2015, an article at Newswatch33 suggested NASA comfirmation for 15 days of darkness between November 15 and November 29 of that year. The article said that – according to NASA – such an event hadn’t occurred in over 1 million years. I couldn’t find Newswatch33 online anymore; maybe it’s gone.

There were zero days of all-Earth darkness in November, 2015.

To our knowledge, the first crazy rumors of “days of darkness” sprung up in 2011, when Comet Elenin – sometimes depicted as a spaceship – was supposed to pass between us and the sun, causing 3 “days of darkness” that year. Remember them? Of course, you don’t because they didn’t happen. This image is from The Death of Comet Elenin: A Return to Rationality?

I think it’s interesting that these “days of darkness” rumors all spring up around November and December, when the northern half of Earth is edging toward its winter solstice and shortest day of the year. Let’s face it, there are more hours of darkness out there now, for us on this half of the globe. Just remember … it’s a natural kind of darkness, a resting kind of darkness.

In fact, for the Northern Hemisphere, the earliest sunsets of the year come in early December. After the solstice, for sure by early January, the longer days will be returning very noticeably as we move toward spring and rebirth.

That’s nature’s cycle, and we can depend on it! 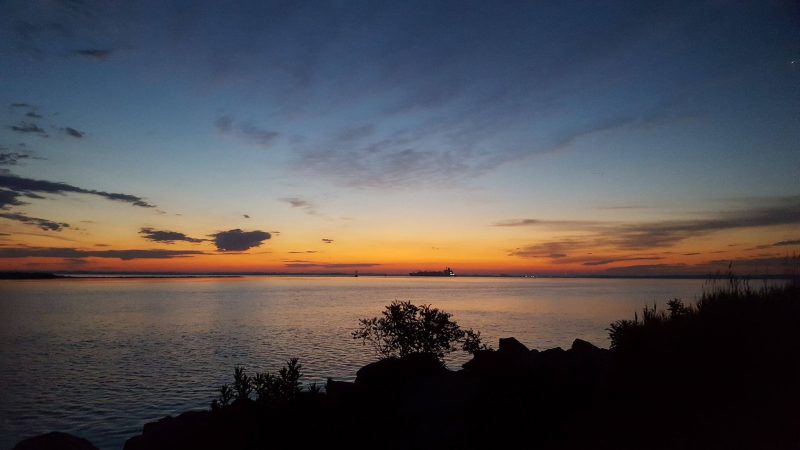 You know the old saying “as surely as the sun will rise?” Believe it! Sunrise in Delaware – June 1, 2017 – by Joe Perchetti.

Bottom line: NASA did not issue a “blackout warning” for November 15 to 30, 2017. There will be zero days of total darkness for Earth this month. Day and night will continue as usual. Sigh.