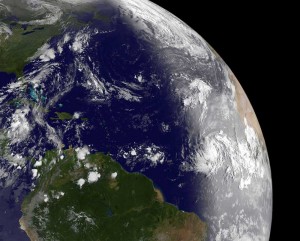 The bright vertical line on the Earth shows daylight to the east of the line, and imagery is visible. To the left of the line the earth is still in darkness, and infrared imagery shows where the clouds are located.

Thank you! Your submission has been received!
Oops! Something went wrong while submitting the form.
END_OF_DOCUMENT_TOKEN_TO_BE_REPLACED