Cyclone Funso, the fifth named storm of the 2012 Indian Cyclone season, formed off the coast of Mozambique and developed into a major hurricane. 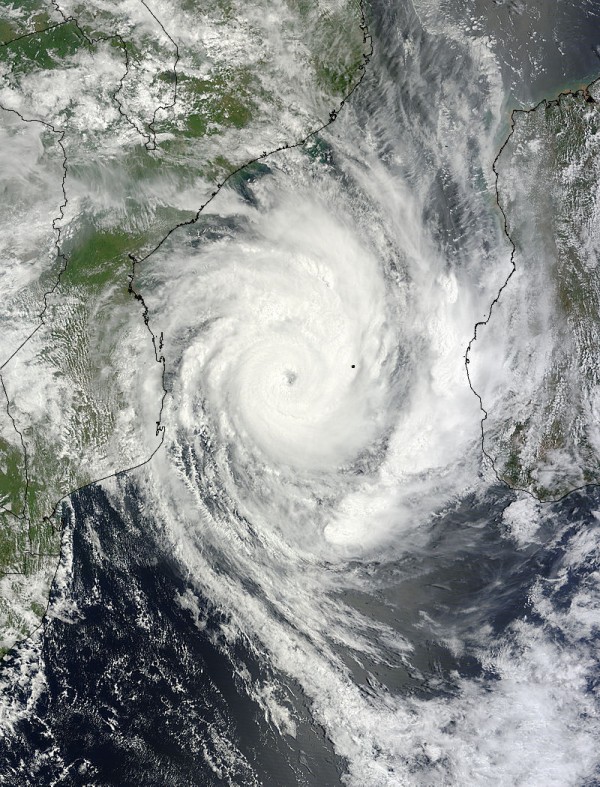 Cyclone Funso, the 5th named storm for the 2012 Indian Cyclone season, formed in the Mozambique Channel in between Mozambique in southeastern Africa and Madagascar. The overall steering currents were weak, and that fact allowed Funso to move and grow slowly through time.

Funso became a major hurricane with a sustained wind of 140 miles per hour (mph) on January 25, 2012 and is now slowly drifting to the south. Funso has been responsible for providing very heavy rains across Mozambique as it has stalled over the region for a couple of days. The previous week, Tropical Depression Dando moved over the same areas providing them ample amounts of rainfall across the region. With rainfall totals over a foot in many areas, flooding has been a serious issue across Mozambique. Based on the rains from Dando and Funso, the major flooding across the region resulted in at least 25 deaths. Cyclone Funso will continue to drift to the south, and it could come close to the southern portions of Mozambique before it finally moves away from land.

This image shows the rainfall totals within the storm on January 21, 2012. Image Credit: SSAI/NASA, Hal Pierce

NASA’s Tropical Rainfall Measuring Mission (TRMM) Satellite estimated light to moderate rainfall (blue and green) falling at a rate between .78 to 1.57 inches (20 to 40 mm) per hour (image above). The heaviest rain was located on the right side of the eye, over the Mozambique channel. On January 25, 2012, the storm was “breathing” very well as the cloud patterns and overall circulation is showing excellent outflow. Ocean temperatures have cooled in the area where it stalled over the past few days as it upwelled colder waters to the surface. The latest models and guidance shows Funso drifting to the south. However, some of the movement could push a little to the southwest, which would put Funso awfully close to the southern portions of the Mozambique’s coast. However, I believe the steering currents will push it away from Mozambique. As Funso approaches further south, it will encounter cooler ocean waters and it will accelerate/dissipate by the time it gets near the latitude of 40°S. As of now, wind speeds in the storm have decreased a little to approximately 130 mph based on CIMSS intensity estimates.

Funso is responsible for providing flooding across the Incomati River. Based on the rains from Dando and Funso, the major flooding across the region resulted in at least 25 deaths. The slow speed of Funso has contributed over a foot of rain across the region, which contributed to road closures. Some residents had to be rescued by boat as they were trapped in water on the highway. The Movene River has risen significantly, which is the main water source for residents of Maputo. All of the water used from this river is now brown. The northern Zambezia province is the hardest hit area as it has been difficult for rescuers to reach the flooded areas.

Bottom line: Cyclone Funso is a major hurricane. It has been providing very heavy rains across Mozambique and is slowly drifting to the south. By Saturday, this storm will begin to accelerate further south and begin to weaken. Until then, the outer bands of the storm will continue to produce squally, wet weather across portions of southeast African, the Mozambique coast, and the western coasts of Madagascar. Approximately 25 people have been killed due to the combination of heavy rains from last week’s tropical depression Dando and this week’s Funso. Many areas have seen over a foot of rain, and a few areas are difficult to reach due to the extent of flooding. Conditions should begin to clear up by for these areas by Friday afternoon, January 27.