A new study published in the Annals of Botany proposes that breeding crops with deeper roots would help combat rising carbon dioxide levels in the atmosphere.

A new study published in the Annals of Botany in August, 2011 proposes that breeding crops with deeper roots would be an effective and feasible strategy to combat rising carbon dioxide levels in the atmosphere.

A large portion of carbon dioxide that is emitted into the atmosphere gets absorbed by vegetation during the process of photosynthesis. Plants and trees turn the carbon dioxide into useful molecules, such as sugars, that are used to support growth. Eventually, some of the carbon used by plants is deposited into the soil where it may reside for long periods of time.

Efforts to promote carbon capture and sequestration in the soil by vegetation are not new. Examples include reforestation projects, no-till agriculture and planting perennials instead of annual crops.

A new study by Douglas Kell proposes that substantial amounts of carbon could be stored in the soil if efforts were made to breed novel crops with roots designed to enhance carbon sequestration.

Douglas Kell is a professor in the school of chemistry at the University of Manchester and chief executive of the Biotechnology and Biological Sciences Research Council. 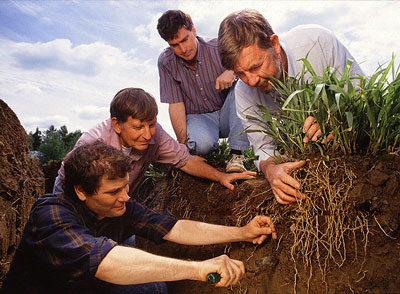 Eastern gamagrass (Tripsacum dactyloides) is a perennial plant that is grown as pasture forage or to produce hay for livestock. Image Credit: USDA.

In a press release, Professor Kell highlighted other possible benefits of designing plants with deeper roots when he stated:

In addition to the simple carbon sequestration that this breeding could imply – possibly double that of common annual grain crops – such plants seem to mobilize and retain nutrients and water very effectively over extended periods, thus providing resistance to drought, flooding and other challenges we shall face from climate change. While there is a way to go before such crops might have, for example, the grain yields of present-day cereals, their breeding and deployment seems a very promising avenue for sustainable agriculture.

The study by Professor Kell regarding breeding plants with deeper roots for carbon sequestration was published on August 3, 2011 in the journal Annals of Botany.