Large cracks in Arctic sea ice are helping pull atmospheric mercury down to the Arctic surface, according to new NASA research. 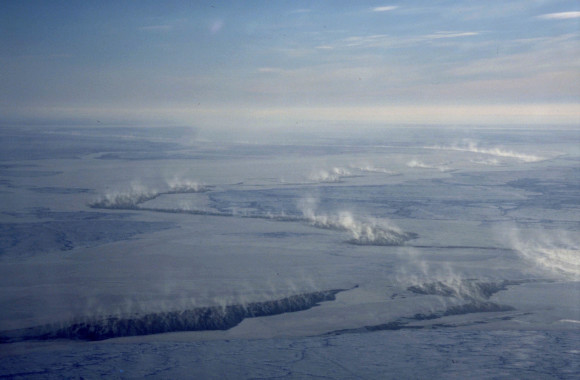 A report in the January 15 issue of Nature describes a newly-discovered process that might be pumping atmospheric mercury down to the Arctic surface. The NASA researchers say that large cracks in Arctic sea ice expose warmer seawater to cold polar air. The heat and moisture form clouds, and the vigorous mixing in the air above the cracks drive mercury in the atmosphere down to the surface. This process can lead to more of the toxic pollutant entering the food chain, where it can harm fish and animals who eat them, including humans.

The time-lapse movie below shows clouds rising from cracks in sea ice near Barrow, Alaska. The cracks are not visible.

The mercury-pumping reaction takes place because open water in a lead is much warmer than the air above it, according to study lead author Chris Moore of the Desert Research Institute, Reno, Nev. Because of that temperature difference, the air above the lead churns like the air above a boiling pot. Moore said:

The mixing is so strong, it actually pulls down mercury from a higher layer of the atmosphere to near the surface.

The mixing, marked by dense clouds spewing out of the leads, extends up into the atmosphere about a quarter-mile (400 meters). Moore estimates this may be the height where the mercury pumping occurs.

Bottom line: A NASA research team’s report in the January 15, 2014 issue of Nature describes a process by which large cracks in Arctic sea issue are helping pump atmospheric mercury down to the Arctic surface.