Pine Island Glacier has cracked and will spawn giant iceberg

In October, in their first flight over the Pine Island Glacier in 2011, IceBridge spotted this crack in the ice. Eventually, it’ll spawn a new iceberg.

I’ve been meaning to show you this image for several weeks, and be sure to click into the EarthSky interview with polar scientist Sophie Nowicki that explains more. The image shows a large crack in the West Antarctic Ice Sheet’s Pine Island Glacier – discovered about a month ago (October, 2011) by members of IceBridge, an Antarctic expedition. 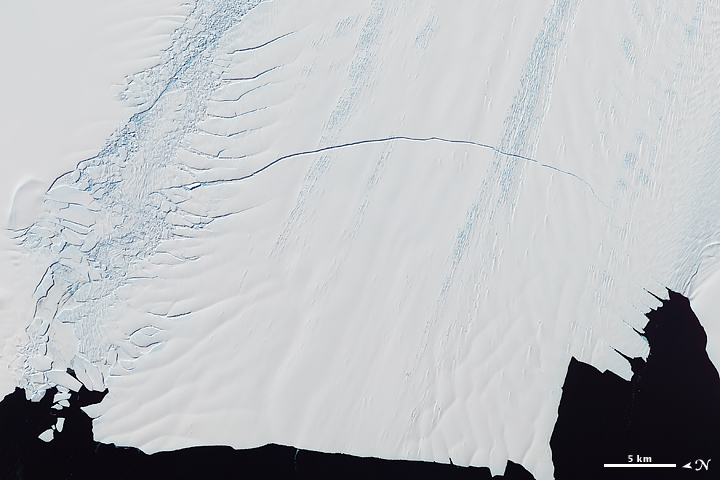 The image above isn’t the discovery image. It’s a space image, from NASA’s Terra satellite, which acquired it on November 13, 2011. At that time, the crack extended for 19 miles (30 kilometers), was 260 feet (80 meters) wide and 195 feet (60 meters) deep. Eventually, the crack will extend all the way across the Pine Island Glacier. Then a giant iceberg will calve from the glacier and drop into the Amundsen Sea. Scientists estimate the iceberg will be about 350 square miles (900 square kilometers). It will float awhile, slowly melting.

IceBridge is a NASA mission that flies airplanes over polar ice carrying radar and lidar equipment to measure ice thickness. The IceBridge team spotted this crack in the Pine island glacier while on their first flight of 2011 over the glacier. This isn’t the first time a crack like this has been seen, though. Glacier cracking and calving is a natural process. They’re a natural and awesome part of Earth’s water cycle. And although processes like this were mostly unknown to us only a century ago – when the first explorers were struggling to reach the South Pole on foot – since the advent of scientific aircraft and satellites, we’ve been able to watch glaciers crack and calve in real time. 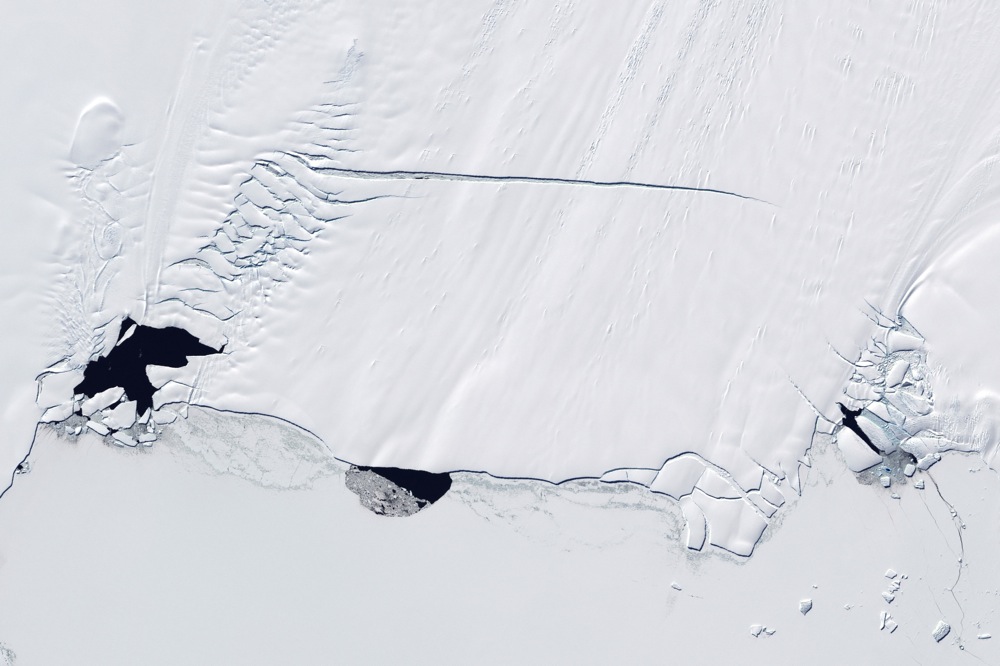 Crack in Pine Island Glacier, seen by the Landsat satellite, in 2001

The image above, for example, is from Landsat, acquired on January 13, 2001, which was the last time Pine Island Glacier calved a large iceberg.

In fact, Pine Island Glacier itself is one of the largest single contributors to sea level rise in recent years. Like most polar ice on Earth today, it’s melting. Pine Island Glacier is shrinking at a rate of 100 meters (300 feet) per year, and it’s responsible for seven percent of the world’s recent sea level rise. Scientists think that the glacier is shrinking so quickly because the ocean water that flows under it is warming, increasing melt at the base.

Bottom line: In October 2011, NASA’s IceBridge team noticed a large crack in the Pine Island Glacier of Antarctica’s West Antarctic Ice Sheet. Cracking glaciers are natural. They’re the process by which icebergs from. Scientists are watching this particular glacier carefully, since it’s one of the single largest contributor to sea level rise in recent years. Pine Island Glacier is sometimes referred to as the “weak underbelly” of the West Antarctic Ice Sheet.

More about the 2011 crack in Pine Island Glacier from NASA