Satellite images of the crack in Antarctica’s Larsen C ice shelf. If it breaks off, it’ll make an ice island in the Southern Ocean as large as one of the smallest U.S. states. 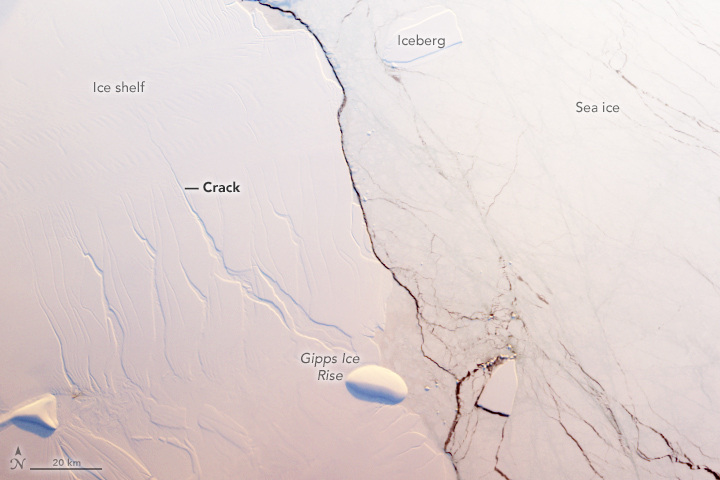 Natural-color image of the crack in Antarctica’s Larsen C ice shelf, acquired on August 22, 2016 by NASA’s Terra satellite. The crack has increased in size to 80 miles (130 km) long. Image via NASA Earth Observatory.

Sunlight has returned to Antarctica as Southern Hemisphere spring approaches, and NASA’s Terra satellite has had enough daylight to capture an image of a known crack or rift along Larsen C — the continent’s fourth-largest ice shelf. The crack can be seen to have grown considerably longer during the long Antarctic winter night. A group in the United Kingdom – called Project MIDAS – has also been tracking the crack and reported on August 18, 2016 that it has grown 13 miles (22 km) over the past six months. It now stretches 80 miles (130 km).

NASA said on September 8 that its scientists can’t predict whether this ice shelf will calve and collapse, as the Larsen A ice shelf did in 1995 and as Larsen B did in 2002. Ala Khazendar of the Jet Propulsion Laboratory said in a NASA statement:

We don’t know yet what will happen here. 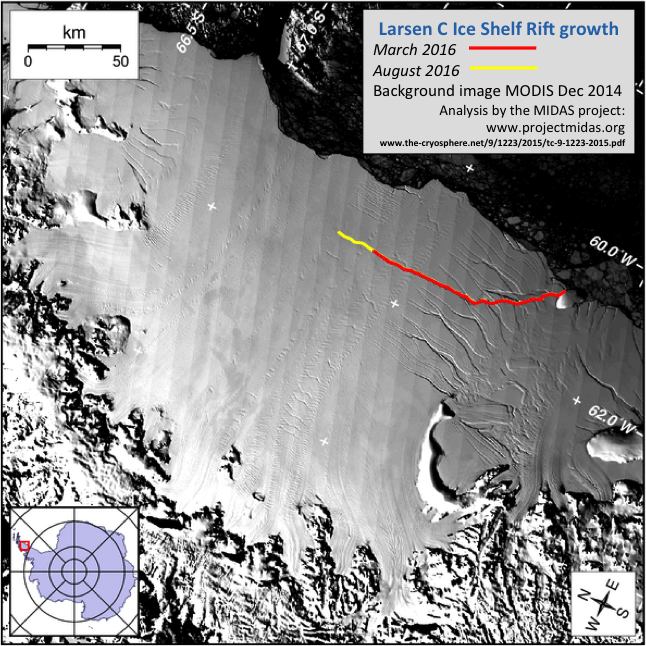 Image of the growing crack in Larsen C via Project MIDAS.

The Larsen C ice shelf is “slightly smaller than Scotland” according to the British Antarctic Survey. Writing in the Washington Post, Chris Mooney said in August that Larsen C:

… is called an ice ‘shelf’ because the entirety of this country-sized area is covered by 350-meter-thick ice [about 1,000-feet-thick ice] that is floating on top of deep ocean waters.

Mooney also pointed out that the amount of ice that could be lost would be around 2,316 square miles (6,000 square km), or, as he said, nearly the size of Delaware. He added:

So in sum, we’re talking about a possible ice island in the Southern Ocean that is as large as one of the smallest U.S. states.

NASA captured the image at the top of this page with the Multi-angle Imaging SpectroRadiometer (MISR) on its Terra satellite. The instrument has nine cameras that can be used in various combinations to get different perspectives of a landscape. The image below is a composite, made using MISR’s backward-, vertical-, and forward-pointing cameras. By combining these different angles in one image, NASA said, you can discern the roughness of a surface. In the image below, rougher surfaces (sea ice surfaces) appear pink and smoother areas (on land) appear purple. 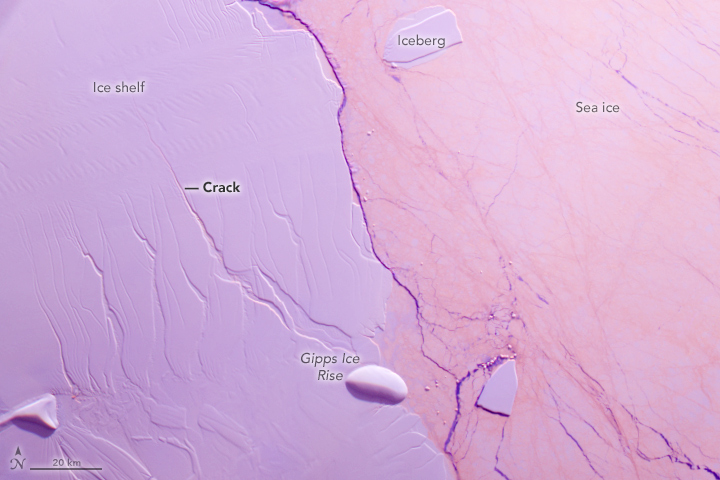 NASA also pointed out that cracks and calving of ice from the front of an ice shelf is a normal process:

Shelves are fed by ice coming from glaciers and ice streams from the interior of the continent. They advance into the ocean until a calving event takes place. The shelf front retreats and then advances again. The whole cycle can occur over the span of a few decades.

Ala Khazendar at JPL said:

That’s just part of life for an ice shelf. That’s how they behave.

The growing crack on Larsen C could be the beginning of a process that will end up like Larsen B.

If a big calving event takes place, we will be interested to see how the shelf itself reacts. But all the indications so far are that it is relatively stable, albeit with intimations of change.