A team of scientists from the British Antarctic Survey have demonstrated how new satellite technology can be used to count whales, and ultimately estimate their population size.

The team used Very High Resolution (VHR) satellite imagery, alongside image processing software, to detect and count whales breeding in part of the Golfo Nuevo, Peninsula Valdes in Argentina. Whales are extremely difficult to count on a large scale. Traditional methods, such as counting from ships or land, can be costly and inefficient.

The researchers analyzed a single WorldView2 satellite image of a bay where southern right whales gather to calve and mate. The image had a resolution of 4 pixels per 11 square feet (1 square meter), covered an area of 44 square miles (113 square kilometers) and picked up on a broad spectrum of colors, including light from the far blue end of the spectrum which penetrates deep into the water column.

The team first manually identified whales from the image and found 55 probable whales, 23 possible whales and 13 other underwater objects that were not whales, such as rocks. They then tested a series of automated image-processing systems. The scientists say that the best of the methods automatically located 89 percent of the probable whales that they had counted manually 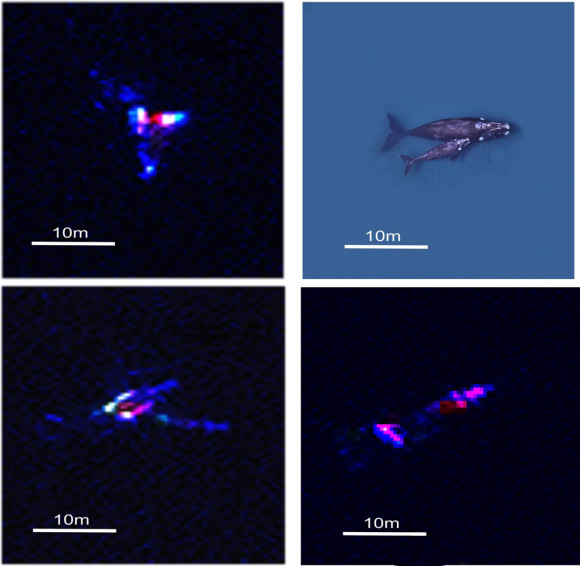 Southern right whales, driven to near extinction, have made a limited recovery following the end of whaling. In recent years, however, many deaths have been seen on their nursery grounds at Peninsula Valdes. Their population size is now unknown but with this sharp increase in calf mortality, estimates are needed. The enclosed bays in this region contain calm, shallow waters which increase the chance of spotting the whales from space.

The results of the study were published this week in the journal PLoS ONE.