Cottonwood trees and the snows of June

Cottonwood trees in the American West are a nuisance to some and a treasure to others. They yield shade, beautiful foliage and, in June, a kind of warm, fluffy “snow.” 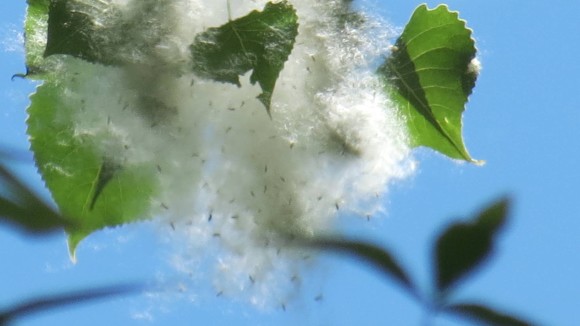 I have seen it snow from my home in Denver, Colorado in one year or another, every month of the year except July and August. On the great peaks of Rocky Mountains, it can snow at any time of year, but Denver is not in the mountains. Rather, Denver is on the high plains just to the East of the Rockies’ Front Range, where snowfalls usually range October and April, and sometimes extend a month on either side of that. But, in many parts of the American West, it also snows, regularly, in June. If you’re in this part of the country now, you might be experiencing this year’s June “snow.”

The June snows are white and fluffy, but warm and cottony rather than cold and crystaline. The snows of June consists of “cotton” from the cottonwood trees: small bits of cotton-like fibers enclosing a small green cottonwood seed. The cotton is nature’s distribution agent, allowing the seeds to be widely dispersed as they are blown in the wind. 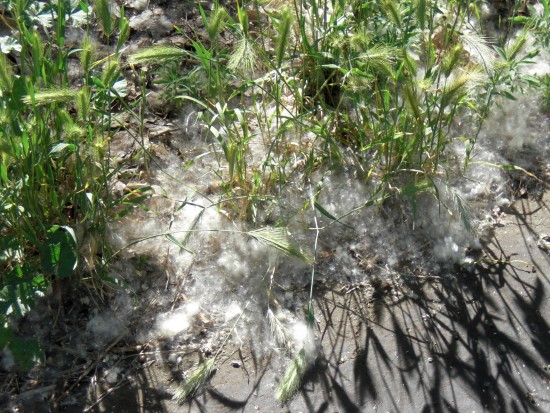 There’s snow in the mountains much of the year as seen from Denver, but in June a warm fluffy snow lies on the ground. Photo by Larry Sessions. 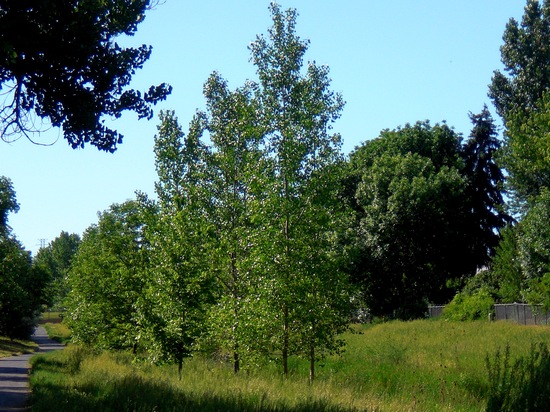 Sometimes, especially near a stand of cottonwoods, there is a flurry of cotton not unlike a slight flurry of winter snow. The little, bright white puffs of cotton waft up high in the sky and can shine, starlike, in strong sunlight. It would not surprise me at all if high-flying tufts of cottonwood cotton have spawned fleeting thoughts of UFOs, at least among those unfamiliar with the phenomenon.

Cottonwood cotton can be a nuisance, too, as it piles up and is sometimes difficult to clear away. During particularly prolific Junes, it can clog filters, collect inches deep in gutters, and turn into clumps of fibrous mass in the rain. 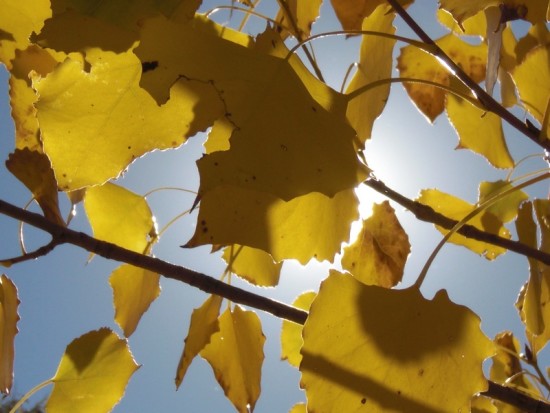 In some cases the cotton can completely cover patches of ground, looking for all the world like the cold, wintery type of snow. In fact some towns have forbidden cottonwoods, or at least the cotton-producing female trees, as a public nuisance.

In the Denver area, the cotton blizzard typically lasts only a few weeks, and all is gone by July. Various forms of cottonwoods and related poplars can be found through most of North America, and both the timing and amount of “cotton” produced can vary a bit, but here in Denver it is late May through June.

The greatest concentrations of cottonwoods tend to be on the Great Plains and in the Intermontane West. They are particularly common along streams on the plains, and in places long stretches of cottonwoods growing along either side of a creek or river snake a bold, dark thread through an otherwise nearly featureless landscape.

In fact, the sight of a row of cottonwoods in the distance was welcomed by pioneers and wagontrain scouts, as it signified water on an often parched prairie. 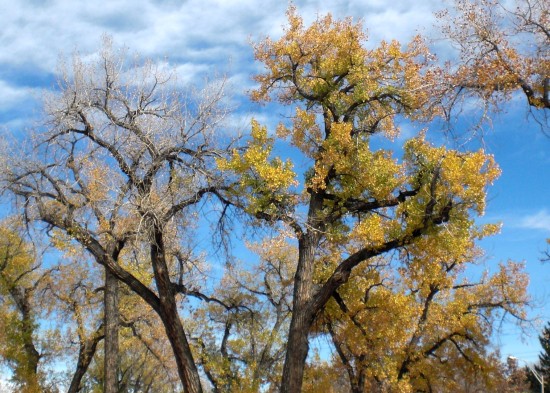 But, while some folks today don’t like cottonwoods, they are my favorite trees. In spring, they provide early splashes of green.

In the summer, that give a brief “snowfall” and months of cool shade.

In the fall they decorate the season with golden, fluttering leaves.

That’s why, unlike many people, I like the cottonwood snows of June.

Bottom line: An ode to Denver’s cottonwood trees and its warm, fluffy “snow.”