Correlation between tornadoes and activity recorded by seismographs

Indiana University released a study in early March 2012 indicating a possible connection between tornadoes and unusual atmospheric activity measured with a seismograph. This research stemmed from the severe weather outbreaks centered on late February and early March 2012. Scientists from Indiana University Bloomington had deployed seismographs – devices for recording and measuring the strength of earthquakes – in the same areas that were hit by the tornadoes. They found a link between atmospheric activity as measured by a seismograph and a strong tornado. They say this link could lead to further studies that might benefit both meteorologists and seismologists. 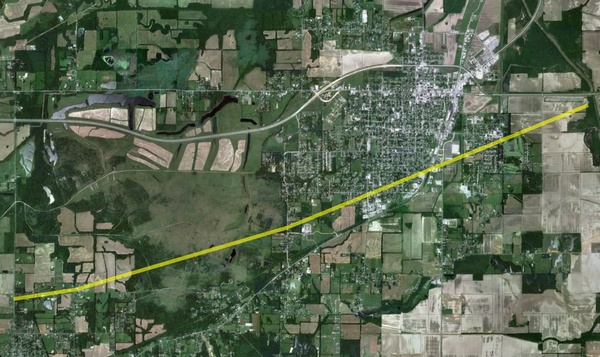 Michael Hamburger, professor in the Department of Geological Sciences at IU Bloomington was one of the researchers conducting the experiment. These researchers used seismographs located around Harrisburg, Illinois. On February 29, Harrisburg was hit by an EF-4 tornado with estimated wind speeds around 180 miles per hour. This tornado killed six people and injured over 100 people. Meanwhile, the seismographs also recorded activity, not from earthquakes, but from pressure changes in the atmosphere. In a press release, Dr. Hamburger said:

The seismograms show a strong, low-frequency pulse beginning around 4:45 a.m. on February 29. Our preliminary interpretation, based on other seismic records of tornadoes, suggests that we were recording not the tornado itself, but a large atmospheric pressure transient related to the large thunderstorms that spawned the tornadoes.

Seismographs are sensitive to several types of “noise” – including noise generated from unusual activity in Earth’s atmosphere. The Indiana researchers are not claiming the tornado itself was the direct reason the seismographs detected activity on February 29. But they are analyzing the correlation of the atmospheric pressure prior to the tornado. There are some indices that show seismic activity prior to a tornado forming and hitting the ground. During the February 29 event, scientists found a slow and small tilting of the seismograph that lasted for several minutes. Hamburger called it a pressure-related signal and said it might help scientists better understand atmospheric activity that takes place right before tornadoes touch down.

The Indiana University researchers are now working with colleagues at the University of California San Diego to gather and understand past seismic activity with confirmed tornadoes in various regions. 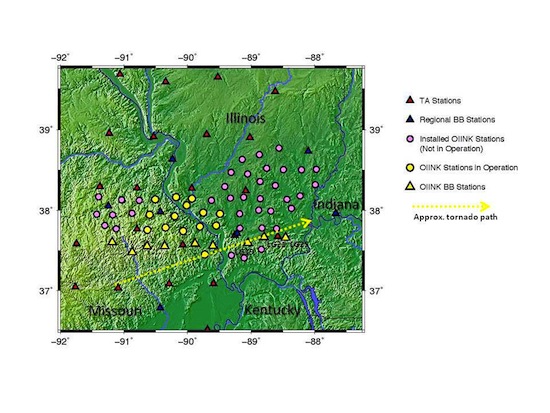 Location of seismographs in eastern Missouri and south Illinois and the path of the tornado that struck Harrisburg, Illinois on February 29, 2012. Image Credit: Indiana University

Indiana University started this research and called it OIINK, because it spans parts of the Ozarks, Illinois, Indiana, and Kentucky in geographic coverage. This setup actually features the positioning of 120 seismometers to study future earthquakes and the overall geological structure. The installation of these instruments began in summer 2011, and there were worries that the severe weather/tornadoes could destroy the seismometers.

Fortunately, so far, the seismometers have been spared, and the research continues. Will the researchers see this correlation between atmospheric activity as measured by the seismographs and tornadoes for every tornado? The February 29 tornado that hit near a seismograph was strong, with an EF-4 ranking. Will the correlation show up for weaker tornadoes in the EF-0 to EF-1 range?

Bottom line: Researchers from Indiana University detected unusual seismic activity – “noise” in the atmosphere as measured by a seismograph – near the Harrisburg, Illinois area early in the morning on February 29, 2012 – the same day that an EF-4 tornado hit the city. Researchers believe that the data could help scientists get a better handle on atmospheric occurrences that happen right before a tornado is spawned. As of now, this information will not enhance or help the National Weather Service in issuing tornado warnings, but it could possibly confirm if a tornado is on the ground. As the spring season is underway, there should be plenty of opportunities to research the correlation of atmospheric activity as measured by seismographs and tornadoes.