By sheer coincidence, researchers have discovered a reef of living cold-water corals in southern Greenland.

The reef is located in southwest Greenland and was formed by cold-water corals with hard limestone skeletons. There are several species of coral in Greenland, but this is the first time that an actual reef has been found. 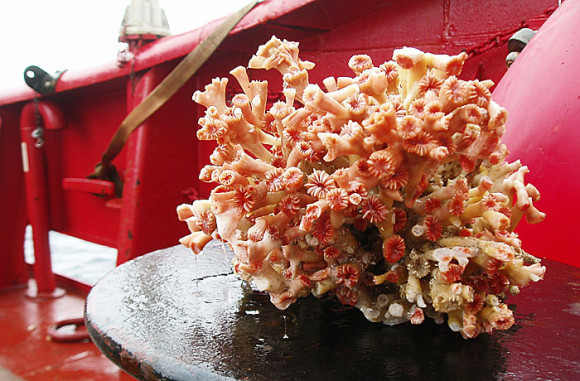 The reef was discovered by accident when a Canadian research vessel needed to take some water samples. When the ship sent the measuring instruments down to a depth of 900 meters, they came back up completely smashed. Fortunately there were several pieces of broken coral branches on the instrument that showed what was responsible.

In the tropics, reefs are popular tourist destination for divers, but there is little prospect of this reef becoming a diving hotspot. The Greenland reef, located off Cape Desolation, lies at a depth of 900 meters (about half a mile) in a spot with very strong currents, making it difficult to reach. So far, little is known about the reef itself and what lives on it.

While the tropical coral reefs depend on light to survive, cold-water coral reefs live in total darkness, at depths the sun’s rays never penetrate. Nevertheless, they have many colorful residents and many different kinds of organisms living in them. While hot water corals obtain some of the energy they need to grow from the light-dependent green algae which live in the corals, cold water coral get all their nourishment from small animals, which they catch. Thus, they are not dependent on light and can live in very deep water.

Helle Jørgensbye, a PhD student DTU Aqua does research into life at the bottom of the west Greenland waters. She said:

It’s been known for many years that coral reefs have existed in Norway and Iceland and there is a lot of research on the Norwegian reefs, but not a great deal is known about Greenland. In Norway, the reefs grow up to 30 meters high and several kilometers long. The great Norwegian reefs are over 8,000 years old, which means that they probably started to grow after the ice disappeared after the last ice age. The Greenlandic reef is probably smaller, and we still don’t know how old it is.

Read more from the Technical Institute of Denmark