Cooler spring weather does not equal a cooling climate

It’s not uncommon to see pockets of unusually cold air in a warming world. Why? Because weather does not equal climate. 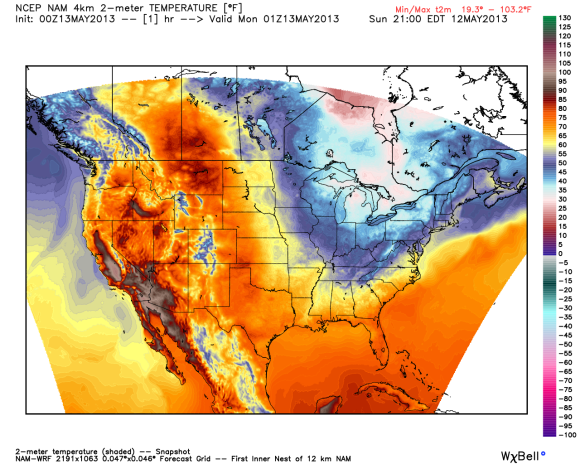 Very cold temperatures are occurring in the eastern U.S. However, not true for parts of western U.S. and Canada. Image Credit: Weatherbell

Here we go again! We’re in the middle of May 2013, and we are still watching surges of very cold weather affecting parts of the United States. Yet March 2013 (the most recent month whose analysis is available the National Climatic Data Center) was tied with 2006 as the 10th warmest March ever recorded – globally – since record keeping began. In other words, if the weather in your neck of the woods has been seeing below-average temperatures the past several months, it means it’s likely someone else, somewhere else on the globe, has been getting higher-than-average temps. To understand what’s happening with Earth’s climate, you have to look at the big picture. You might want to educate yourself about what’s creating the cold weather in some parts of the Northern Hemisphere right now and then ask yourself … could global warming be responsible for triggering the colder weather in some places? 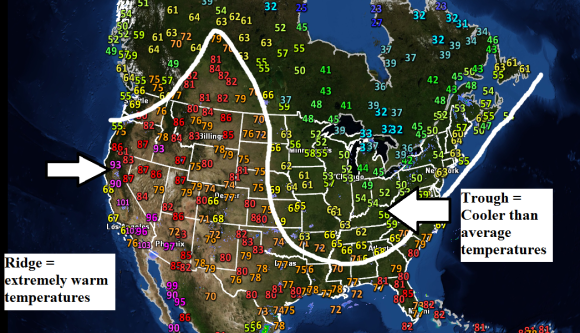 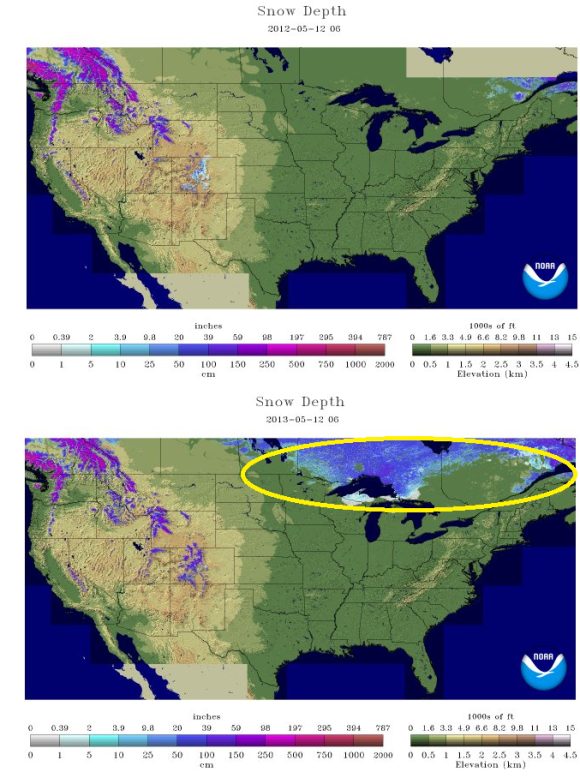 In 2012, it was difficult to find any snow across Canada or the U.S. unless you were in the mountains. Not the case in 2013! Image via NOAA/National Snow Analyses

First of all, weather is not climate. Weather happens over a short period of time. It changes constantly. Climate describes the average conditions over a particular region within a span of more than 20 to 30 years. Dr. Marshall Shepherd, current President of the American Meteorological Society and professor at the University of Georgia once said:

If you expose yourself to outside influences over a long period of time, your personality can eventually change. The same is true of looking at climate in various regions across Earth’s globe. It could take 30 to 50 years for outside influences to alter what would be considered as the “normal” weather pattern. With this in mind, I remind you: Although cold waves with cooler-than-average temperatures in the month of May are uncommon, climate overall is now warmer than it has been since record-keeping began in the 1800s. So those cool temps simply mean that other locations must be experiencing above-average temperatures. Weather, after all, is a local phenomenon.

The video below was posted by the National Climatic Data Center discussing pockets of cold air in a warming world. It talks about how we determine above- and below-average temperatures for various regions across the globe. It also explains temperature anomalies for both the ocean and for land surfaces. It points out that it is not uncommon to see pockets of unusually cold air in a warming world.

Majority of the chilly air in the easter U.S. is likely caused by the Arctic Oscillation dropping into negative territory this past winter and into this spring. Image via NOAA

The Arctic Oscillation for a large majority of this past winter has been negative, which means cold air from the Arctic is able to push south towards the United States. The Arctic Oscillation, also referenced as the AO, is a climate pattern characterized by winds circulating counterclockwise around the Arctic at around 55°N latitude. In a negative phase of the AO, the winds become weaker at the poles and the cold air that is bottled up in the Arctic spills southward and brings a much cooler air mass to the mid-latitudes such as the United States. The AO has been consistently negative all winter and into parts of this spring. In fact, the AO is only in neutral activity as of today (May 13, 2013).

Scientists are still trying to figure out what influences the AO and how climate change can shift or affect it over time. Could more extreme negative or positive phases occur with the AO over time as the planet continues to warm? This is a question meteorologists and climatologists are still trying to answer. Earlier this spring, EarthSky’s Deborah Byrd wrote about some possible mechanisms – now being proposed by climate scientists – by which a decrease in Arctic sea ice could, in some years, drive a longer winter and chilly springtime. Check out that post here.

Bottom line: A strong trough is bringing temperatures well below average across the eastern United States on May 13, 2013. Meanwhile, a large ridge is bringing above average temperatures across the western United States and into Canada (Saskatchewan and Alberta). Just because it is unusually cool where you are does not mean the climate itself is cooling. In fact, the temperatures across the globe still remains well above average. Weather can change, similar to a person’s mood. However, climate in a particular region is the average of temperatures over a long period of time (at least 30 years or longer). Can climate change affect the jet stream and oscillations that develop across the globe? Absolutely, but there remains plenty of question marks that meteorologists and climatologists must analyze to understand how weather patterns of today are being affected by a warming climate. Sudden and unusual weather patterns are expected to continue as the climate continues to warm. People across the globe will continue to see drastic changes in various weather patterns. For instance, we could see more droughts, floods, heatwaves, and yes, even cold snaps.

Why is this Northern Hemisphere spring so cool?