Cleveland Volcano’s growing lava dome might precede an explosive eruption, according to the Alaska Volcano Observatory.

The Cleveland Volcano in Alaska shows elevated surface temperatures in satellite data over the past 24-hours – September 23 and 24, 2011 – suggesting a continued and perhaps heightened eruption of the volcano’s lava dome, a roughly circular protrusion from Mount Cleveland, caused by the slow extrusion of viscous lava. There have been no observations of ash emissions from Cleveland Volcano at this time, but the volcano continues to appear at increased risk for an explosive eruption, according to the Alaska Volcano Observatory (AVO).

If such an event were to occur it is not expected to pose a threat to nearby residents, but aircraft would need to stay alert.

AVO said in the September 24 update:

A growing lava dome in the crater increases the possibility of an explosive event, but does not necessarily indicate that one will occur. It is possible that explosions from the summit crater vent could produce ash clouds that may exceed 20,000 ft above sea level. These events can occur without warning and may go undetected in satellite imagery for hours. If lava dome growth continues, lava may overflow the crater rim to produce a lava flow and/or collapse to produce pyroclastic flows. Sudden collapse of the effusing lava could result in the generation of a volcanic ash cloud.

Cleveland Volcano is a 5,676-foot (1,730-meter) mountain that rises above the remote Aleutian Islands in Alaska. Mount Cleveland is one of Alaska’s most active volcanoes. Its last major eruption was in 2001, but significant volcanic activity has been observed at the mountain during the past five years.

On September 22, the lava dome had grown to 65 feet (20 meters) below the crater rim . It’s thought it could reach the top of the rim over the next few weeks. This has increased the possibility of an explosive event, but does not necessarily mean that one will occur. Lava domes can become unstable when they grow big enough and a dome collapse could lead to an explosive release of ash and volcanic gases.

The lava dome could also stop growing or it could reach the top and simply ooze over according to Chris Waythomas of the U.S. Geological Survey and program chief at the Alaska Volcano Observatory.

If an explosive eruption were to occur at the Cleveland Volcano it would pose little threat to the nearest residents in Nikolski, a village that is located 50 miles (81 kilometers) east of the volcano. However, a large ash plume could interfere with overflying aircraft. 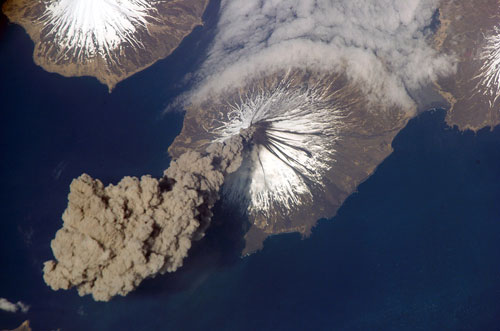 Ash cloud from Mount Cleveland, Alaska, taken on May 23, 2006. No ash cloud has been observed from the volcano as of September 24, 2011, but there are other signs an eruption might be near. Image Credit: NASA.

The alert status for the Cleveland Volcano is currently orange according to the United States Geological Survey’s Volcano Hazards Program. Red is the highest alert level for volcanic eruptions.

The Alaska Volcano Observatory, which is monitoring activity at the Cleveland Volcano, is a cooperative program of the U.S. Geological Survey, the University of Alaska Fairbanks Geophysical Institute and the Alaska Division of Geological and Geophysical Surveys.

CO2 from human activity far surpasses that of volcanoes