It’s the highest measurement of carbon dioxide in Earth’s air since 1958. It’s possible there has not been this much CO2 in our air in more than 3 million years.

Since 1958, instruments on top of Mauna Loa in Hawaii have been measuring the amount of carbon dioxide (CO2) in Earth’s atmosphere. In all that time, the amount of CO2 has been increasing, and most climate scientists believe this increase is caused primarily by burning fossil fuels and that it is responsible for a warming of Earth observed since the start of the Industrial Revolution. On May 10, 2013, NOAA – which runs the Mauna Loa Observatory – announced an expected climate milestone. That is, the amount of CO2 in Earth’s atmosphere now exceeds 400 parts per million (ppm) for the first time in 55 years of measurement. It’s possible there has not been this much CO2 in Earth’s atmosphere in more than 3 million years. 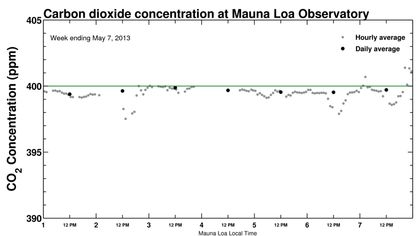 A chart from Scripps Institution of Oceanography showing the carbon dioxide level hovering near 400 ppm in the first week of May, 2013. Two independent teams of scientists measure CO2 on Mauna Loa: one from NOAA, the other from the Scripps. The NOAA team posted word on its web site on May 10, 2013 before dawn Hawaii time: The daily average for May 9 was 400.03 ppm. The Scripps team later confirmed the milestone had been crossed.

Many places are reporting this climate milestone today, but there’s a good, readable article in National Geographic. Among other things, the article says:

The last time the concentration of Earth’s main greenhouse gas reached this mark, horses and camels lived in the high Arctic. Seas were at least 30 feet higher — at a level that today would inundate major cities around the world.

The planet was about 2 to 3 degrees Celsius (3.6 to 5.4 degrees Fahrenheit) warmer. But the Earth then was in the final stage of a prolonged greenhouse epoch, and CO2 concentrations were on their way down. This time, 400 ppm is a milepost on a far more rapid uphill climb toward an uncertain climate future. 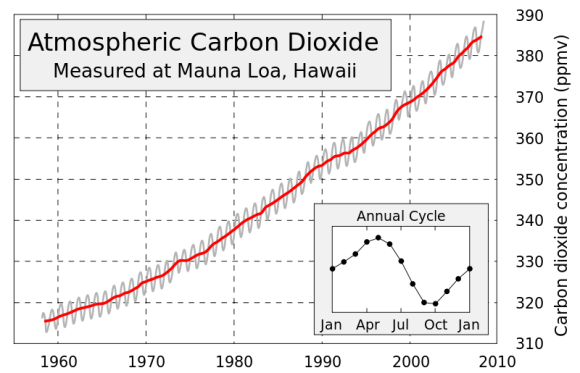 This figure shows the increase in carbon dioxide in Earth’s atmosphere, as directly measured at Mauna Loa, Hawaii. This curve is known as the Keeling curve, for the late Charles David Keeling, who started the Mauna Loa measurements in 1958. The Mauna Loa measurements are an essential piece of evidence of the man-made increases in greenhouse gases that are believed to be the cause of global warming. The longest such record exists at Mauna Loa, but these measurements have been independently confirmed at many other sites around the world.

Bottom line: Scientists announced today (May 10, 2013) that the instrumentation on top of Mauna Loa in Hawaii shows we have reached an expected climate milestone. The amount of carbon dioxide in Earth’s atmosphere has exceeded 400 parts per million (ppm) for the first time in 55 years of measurement – and possibly in the past 3 million years.