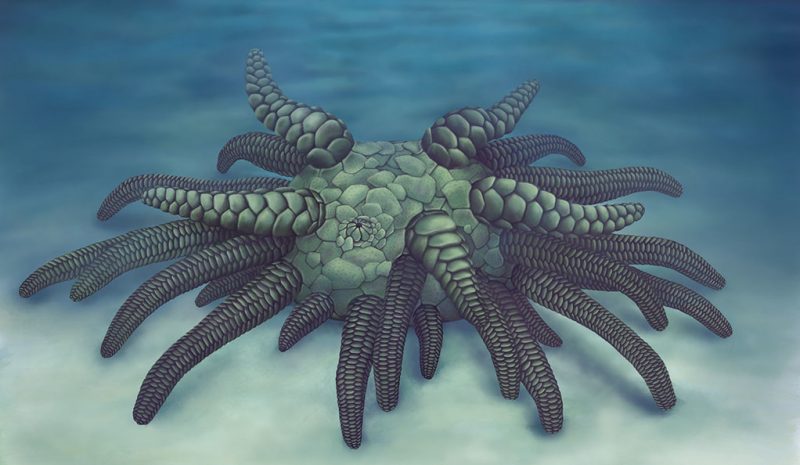 A team of U.S. and British researchers have identified a 430-million-year-old fossil as a new species related to today’s sea cucumbers. They named the creature Sollasina cthulhu, after horror author H.P. Lovecraft’s tentacled monster, Cthulhu (usually pronounced “kuh-THOO-loo”). The discovery is described in a paper published in the peer-reviewed journal Proceedings of the Royal Society B on April 10, 2019.

In his short story “The Call of Cthulhu,” published in 1928, H. P. Lovecraft describes Cthulhu as:

A monster of vaguely anthropoid outline, but with an octopus-like head whose face was a mass of feelers, a scaly, rubbery-looking body, prodigious claws on hind and fore feet, and long, narrow wings behind. 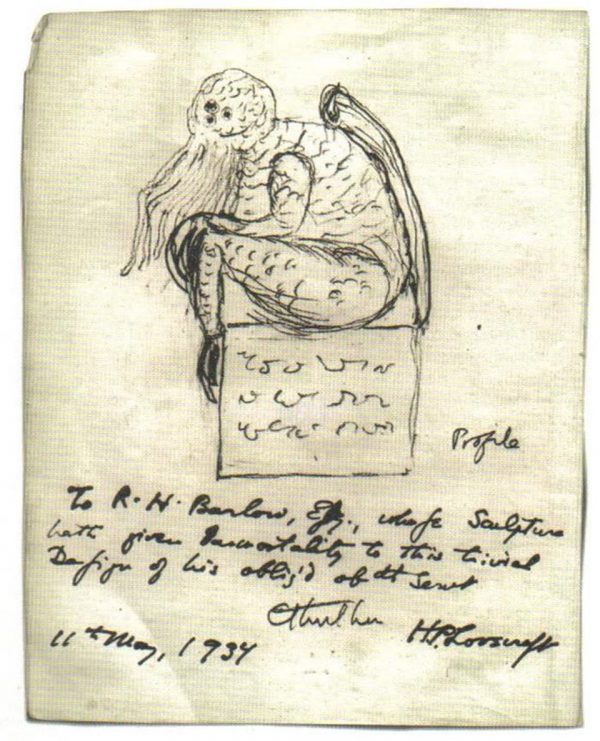 A sketch of Cthulhu drawn by H. P. Lovecraft. Image via Wikipedia.

Lovecraft’s Cthulhu was hundreds of meters (yards) tall. The newly-discovered cthulhu is a lot smaller, about the size of a large spider. The researchers say the creature had 45 tentacle-like tube feet, which it used to crawl along the ocean floor and capture food.

Researchers found in the Herefordshire Lagerstätte in the United Kingdom, a site that has proven to be a trove of fossilized ancient sea animals.

Yale paleontologist Derek Briggs is a co-author of the study. He said in a statement:

In this paper, we report a new echinoderm — the group that includes sea urchins, sea cucumbers, and sea stars — with soft-tissue preservation. This new species belongs to an extinct group called the ophiocistioids. With the aid of high-resolution physical-optical tomography, we describe the species in 3D, revealing internal elements of the water vascular system that were previously unknown in this group and, indeed, in nearly all fossil echinoderms.

To create the 3D reconstruction, scientists ground the fossil away, layer by layer, taking photographs at each stage. The hundreds of slice images were digitally reconstructed into a “virtual fossil.”

And here's a life reconstruction of the monstrous 'Cthulhu' sea cucumber, created by Elissa Martin @yalepeabody. Find out more on our blog: https://t.co/NSBSvJdzuH pic.twitter.com/ri73VsV7UA

That’s how the researchers were able to discern the creature’s internal water vascular system and determine it is more closely related to sea cucumbers rather than to sea urchins.

Source: A new ophiocistioid with soft-tissue preservation from the Silurian Herefordshire Lagerstätte, and the evolution of the holothurian body plan