A Chinese construction crew unearthed a new dinosaur fossil. It had feathers and a beak. A scientist called it “one of the most beautiful, but saddest, fossils I’ve ever seen.” 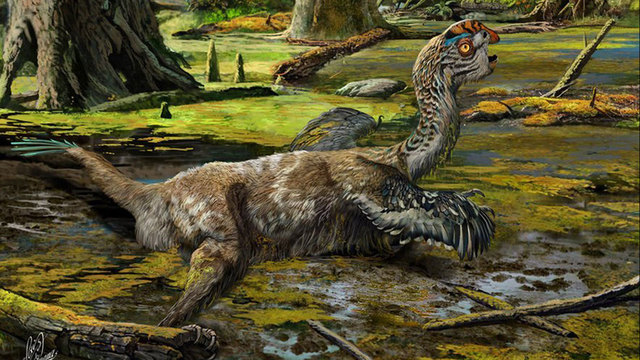 Artist’s concept of newly discovered dinosaur Tongtianlong limosus, during its death throes in mud tens of millions of years ago. Illustration by Zhao Chuang.

Chinese construction workers in the city of Ganzhou made a surprising discovery by unearthing a new species of dinosaur — which scientists have named Tongtianlong limosus or Mud Dragon — during a dynamite excavation. The fossil is a species of oviraptor and is believed to have lived 66 to 72 million years ago according to a paper published November 10, 2016 in Nature’s Scientific Reports. The creature belongs to a family of late feathered dinosaurs with small heads, toothless beaks, and crests. It was believed to exist up until the great extinction event of the dinosaurs, 65 million years ago. This fossil thus is said to demonstrate the continued flourishing of various dinosaur species, particularly in China’s Lanzhou region, in which the Mud Dragon is the sixth new species found.

Scientists called Tongtianlong limosus a “muddy dragon on the road to heaven” in describing the animal’s final moments trapped in mud. In the fossil, the dinosaur appears struggling to escape from mud, with its head and limbs outstretched. As morose as it might seem, the pose gives paleontologists a unique glimpse into the ancient creature’s anatomy and development. Paleontologist and study co-author Steve Brusatte (@SteveBrusatte on Twitter) of the University of Edinburgh, who made the discovery, commented in a press statement:

This new dinosaur is one of the most beautiful, but saddest, fossils I’ve ever seen.

But we’re lucky that the Mud Dragon got stuck in the muck, because its skeleton is one of the best examples of a dinosaur that was flourishing during those final few million years before the asteroid came down and changed the world in an instant.

Tongtianlong limosus is considered one of the many “modern” dinosaurs to have been discovered in the last few decades in Asia as well as North America. It belongs to the dinosaur family Maniraptora, which includes other two-legged feathered dinosaurs with short, toothless heads and sharp beaks. This family of dinosaurs is thought to have evolved into modern birds, and these newly found species show clear avian features, such as bony head crests, believed to be useful in attracting mates and intimidating rivals. In that way, they are much like the modern-day cassowaries, sometimes said to be among the world’s deadliest living birds.

Paleontologists believe that the recent discoveries of dinosaurs in the family Maniraptora demonstrate a clear boom in population diversity, specifically within the few millions of years shortly before the event that sent most dinosaurs into extinction.

Discovered not far from other oviraptors in China’s dino-crowded Lanzhou region, the fossil remains of Tongtianlong limosus give scientists new insight into what the area must have been like during the lifetimes of these ancient creatures. Paleontologist Junchang Lü of the Chinese Academy of Geological Sciences, lead author on the study, said:

Steve Brusatte told National Geographic that the Ganzhou region was a “very dynamic and active environment,” describing it as a dense jungle forest with lots of rivers and lakes. Additional fossils of large sauropods and duck-billed hadrosaurs have been found in the region, underlining the idea that it was once a dynamic dinosaur ecosystem, cut short by a sudden extinction event.

The specialization of these small oviraptors also supports the theory. Such a surge is called evolutionary radiation, and allows organisms with a similar ancestral root to flourish and fill in a variety of environmental niches and specialities.

Dinosaurs in the Maniraptora family all trace their roots to larger predators such as Tyrannosaurus Rex, but these more “modern” dinosaurs – the relatives of modern birds – soon lost their teeth and developed smaller heads, crests, and beaks.

While Tongtianlong limosus‘ pointed jaw implies a specialized diet, Brusatte commented, researchers are unsure of of what exactly it ate.

Bottom line: A Chinese construction crew unearthed a new species of feathered dinosaur, which scientists have called a Tongtianlong limosus or Mud Dragon.