Chilly start to May in U.S. Southeast

Temperatures have been well below average for the Southeast United States for the first half of May 2013. Here’s why.

A pesky upper level low has been spinning away across the southeastern United States for the past several days. It has brought flooding rains and temperatures 15-20 degrees below average in the Southeast.

The weather setup is quite unusual for the month of May, as we are seeing noticeable swings in temperatures across the entire United States. For example, on Monday (May 6) Atlanta temperatures were in the upper 50’s while Seattle temperatures were in the upper 80’s. The reason for this has to do with the location of the jet streams. The subtropical and polar jet stream are far apart, with two areas of low pressure centered across the western U.S. and across the Southeast U.S., providing much cooler weather in areas that would typically be warmer. In this post, I’ll explain why this weather has been unusual for the start of May 2013.

According to Jason Samenow from the Capital Weather Gang,

A huge gap between the northern and southern branches of the jet stream drove the continental temperature contrasts. Because of the separation of the streams, enough latitude existed for the development of large areas of high pressure near the U.S.-Canadian border. Under these big highs, the air compressed and warmed. 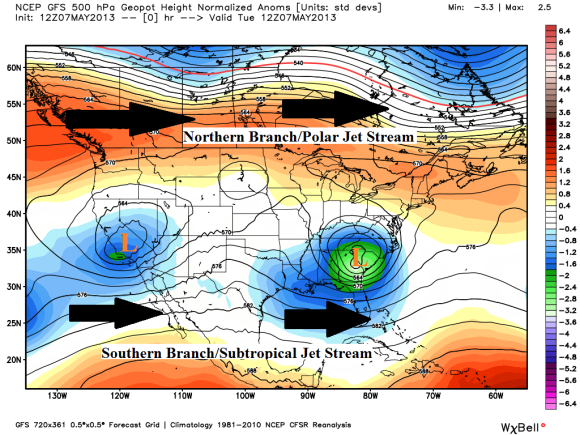 A typical weather pattern in the month of May would show the northern branch of the jet stream slowly retreating to the north and sometimes diving into parts of the Central Plains and into the eastern United States. April, May, and June are typically the prime months for severe weather across the U.S. thanks to the last minute surges of the northern branch of the jet stream digging down and trying to bring in colder air from the Arctic. Meanwhile, the southern branch becomes more active and can provide an increase in heat and moisture across the southern parts of the United States.

Last year, the northern branch of the jet stream was as far north as the Canada/U.S. border with the majority of the United States experiencing above average temperatures. Severe weather was limited, and most of the severe weather occurred in Canada. This year looks eerily similar to 2012 with respect to the lack of severe weather across the United States this spring. I will save that for another post. 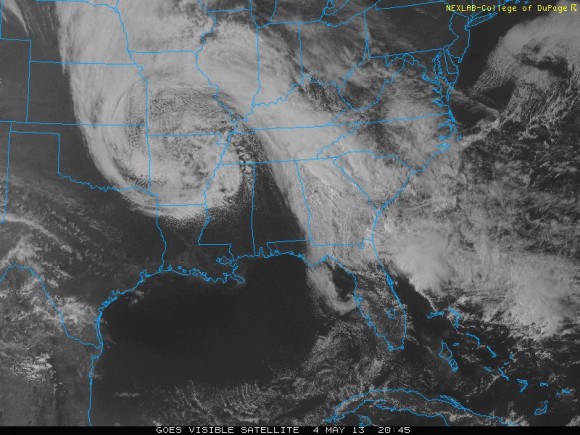 Upper level low responsible for the chilly weather across the Southeast on May 4, 2013. Image Credit: NOAA

The main reason it has been so cool across the southeastern U.S. for the first part of May is due to an upper level low that has stalled across the region for a couple of days. It has brought an increase in cloud cover, significant precipitation, and cool temperatures across the Southeast. In fact, some areas have seen temperatures 15 to 20 degrees below average for this time of the year. Atlanta, Georgia had a high temperature of 59 degrees on Monday, May 6. The average high for Atlanta for May 6 is 78 degrees Fahrenheit. The same upper level low that has been spinning across the Southeast the past few days was also responsible for record cold across Arkansas. In Harrison, Arkansas (Boone County), the high temperature on May 3 was only 38 degrees. This was the coldest May maximum since records began in 1891. In addition, the state of Arkansas experienced around 1-3 inches of snow across the state thanks to the upper level low. According to the National Weather Service in Little Rock, Arkansas, this is latest measurable amount of snow ever recorded since record keeping began. In fact, the previous latest snow for the state was on April 30, 1903 when only a trace was recorded in Fayetteville (Washington County), Gravette (Benton County) and Harrison (Boone County). Not only did the upper level low produce snow in Arkansas, but it was also responsible for providing heavy rain and flooding across Mississippi, Alabama, Georgia, South Carolina, and Virginia.

Meanwhile, above average temperatures have occurred in the Pacific Northwest and across the U.S.Northeast. For instance, parts of the state of Washington and into British Columbia, Canada were flirting with temperatures as warm as 90 degrees!

Will May continue to stay cool for the United States?

The Climate Prediction Center is forecasting below average temperatures continuing for the rest of May in the eastern half of the United States. Image Credit: NOAA

Warmer and drier conditions across the western United States is not a good combination, especially since wildfire season is starting up early this year. Of course, areas with temperatures expected to remain “below average” will still see temperatures at or above average at times during the month of May. The above map shows what could be expected across the United States during the month of May due to the pattern currently in place.

Bottom line: The Southeast U.S. has had a very chilly start to May 2013. An upper level low was mainly responsible for providing heavy rains, temperatures 15-20 degrees below average, and even snow across parts of Arkansas. The upper level low will finally move out and dissipate by Thursday and a shift to the weather pattern will likely provide near-normal temperatures across the Southeast. Remember: Just because it was chilly where you are, does not mean it was cool elsewhere. Simply ask Seattle, Washington if they thought it was cool. After all, Seattle’s temperatures climbed into the upper 80’s!