A month ago, much of Texas and Oklahoma were in drought conditions. This past weekend, they had serious and deadly flooding.

When it rains, it pours. After drought conditions a month ago, the month of May 2015 has become the wettest May ever recorded for several cities in Oklahoma and Texas, including Oklahoma City, Tulsa, and Wichita Falls. Over the Memorial Day weekend (May 23-24), several areas in these states experienced flash flooding that covered parking lots and turned streets into raging rivers. Houses and vehicles were swept away or significantly damaged, as rivers rose, at times several feet in a matter of minutes. At least four people have died, including a firefighter out of Claremore, Oklahoma after a high-water rescue attempt on Sunday morning, May 24. Search and rescue is still underway and over a thousand people were placed in shelters after storms forced people to evacuate their homes.

One of the hardest hit areas over the past weekend occurred in the city of San Marcos in Hayes County – near Austin, Texas – where flooding from the Blanco River swept away at least 350 homes, damaged possibly 1,000 more and washed away many vehicles. The Blanco River at Wimberley, Texas rose to 40.2 feet (12 meters), which is nearly 7 feet (2 meters) higher than the record flood stage ever recorded back in May 28, 1929. Ken Bell, emergency coordinator for San Marcos told CNN that – as of this writing (11 p.m. CDT on May 25, 2015) – 12 people are still missing in Hays County, Texas, many from families who had gathered for the long weekend. The group likely includes children, Bell said.

Also, late in the day on May 25, the same storm system that caused flooding in Texas spawned a tornado that killed 13 people in the border town of Ciudad Acuña, Mexico.

Rain continues in the forecast for central Texas. 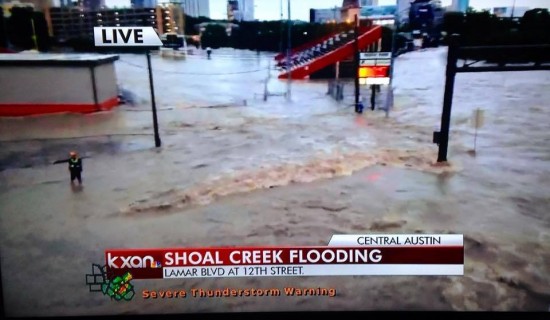 Dallas, Texas is also seeing a top-five wettest May on record. If they receive an additional two inches (which seems very likely before the month ends), they could break the old record for wettest May of 13.66″ set back in 1982. Several areas received over five to eight inches of rain in just a few hours. High moisture content in the atmosphere and storms pushing over the same spots led to flash flooding and record breaking statistics for several cities. 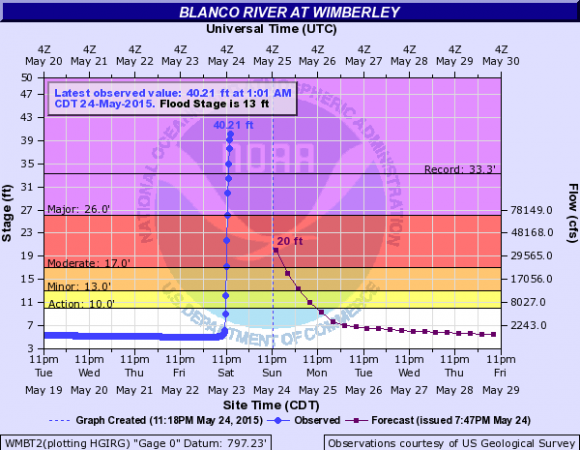 Catastrophic flooding occurred at Wimberley on May 23, 2015. Image Credit: NOAA 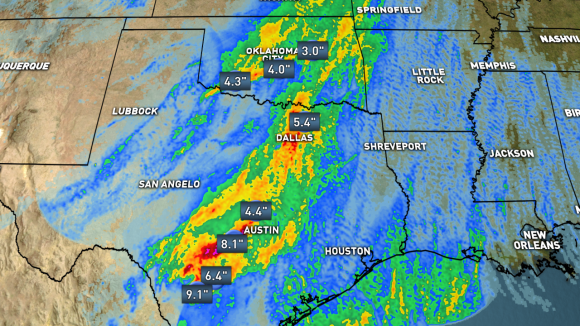 Drought was an issue for parts of Oklahoma and Texas only a month ago. Dry conditions brought upon nearly 14% of the region under severe to exceptional drought back in April 28, 2015. As of now, that percentage has dropped to nearly 3% and could lower this week as more storms are expected across the region. In fact, parts of eastern Oklahoma and northern Texas have an increasing risk of seeing a better coverage of heavy rain and severe thunderstorms. 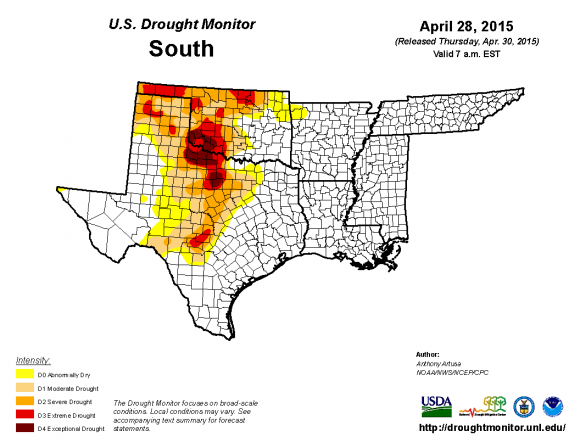 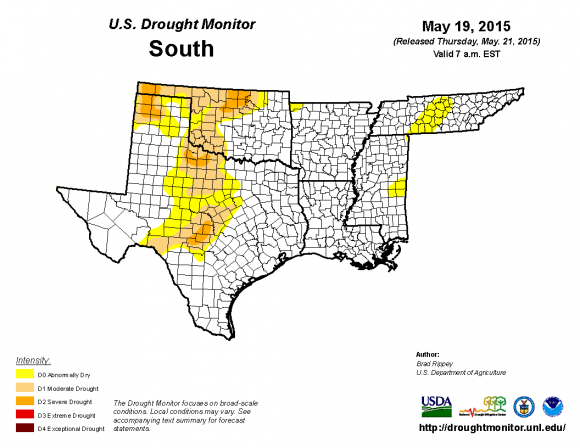 Bottom line: Heavy rain and flooding is expected to continue across Texas and Oklahoma as we finish the month of May. Three people died from flooding this weekend, and hundreds of homes were damaged and destroyed. It is important that if you approach a flooded road, that you turn around and never drive through it. Turn around, don’t drown! Not only can you get caught into a bad situation, but it can also endanger the lives of the emergency responders.