Just when you were convinced that a warming climate would raise sea levels, a new study suggests that unusual weather events across the Indian and Pacific Ocean may have dropped sea levels in 2010 and 2011, temporarily. According to a new study released by the National Center for Atmospheric Research (NCAR), various atmospheric patterns came together and produced so much rain over Australia in 2010 and 2011 that global ocean levels were temporarily halted from rising. In other words, says NCAR: 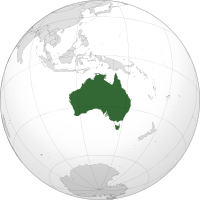 Australia is the smallest continent, and one of Earth’s southernmost continents. Image via Wikipedia

When enough raindrops fall over land instead of the ocean, they begin to add up.

How is it possible that rainfall on land could cause sea level to drop? It all has to do with extreme weather conditions and topography in Australia – the smallest continent – according to NCAR. This study will be published in September 2013 in the journal Geophysical Research Letters.

Sea level has been rising since the end of the last Ice Age. It has been rising by at least 1 to 2.5 millimeters (0.04 to 0.1 inches) per year since 1900. It is rising faster now than a century ago, in part due to global warming, which not only causes ice sheets to melt and enter the sea as water, but also drives a thermal expansion of water. Read more about sea level rise here.

However, for an 18-month period from 2010 into 2011, global sea level rise actually dropped 7 millimeters (about 0.3 inches). Scientists, always curious, wanted to know what would make sea level drop suddenly, when it has been rising for centuries. With the help of NASA’s Gravity Recovery and Climate Experiment (GRACE) satellite and the Argo global array of 3,000 free-drifting floats and other satellite measurements, researchers at NCAR, NASA’s Jet Propulsion Laboratory (JPL) and the University of Colorado at Boulder were able to figure out that rainfall in Australia may have been responsible for the drop in sea level. 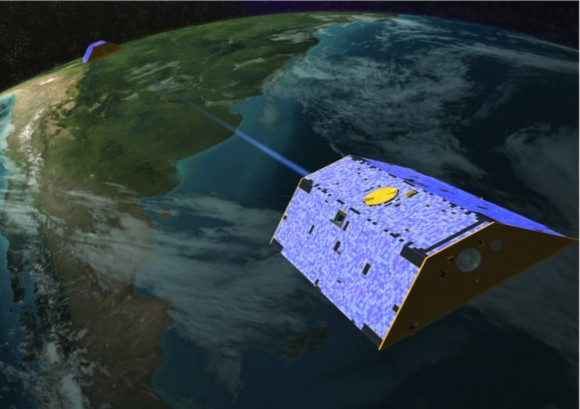 Here’s what NASA’s Grace mission looks like as it measures gravity field data across a continent. Notice there are two satellites here, one following the other in orbit. These satellites enable scientists to measure the mass of continents and thereby determine the reason sea level fell in 2010-2011. Image via NASA/University of Texas at Austin

This study was lead by NCAR scientist John Fasullo and co-authored by Carmen Boening, Felix W. Landerer, and R. Steven Nerem. These scientists found that the mass of South America, and more so Australia, increased during the 18-month period from 2010 to 2011. As the mass of these continents was expanding, sea level rise was dropping.

How do we measure the mass of a continent? NASA’s GRACE mission lets researchers monitor the mass of every continent on Earth. The GRACE satellites are a pair of satellites that were launched in 2002 to make detailed measurements of Earth’s gravity field. Gravity depends on mass, so by measuring Earth’s gravity field over specific spots on Earth, the scientists can learn the mass of continents. They do this work to improve investigations about Earth’s water reservoirs on land, ice and oceans. 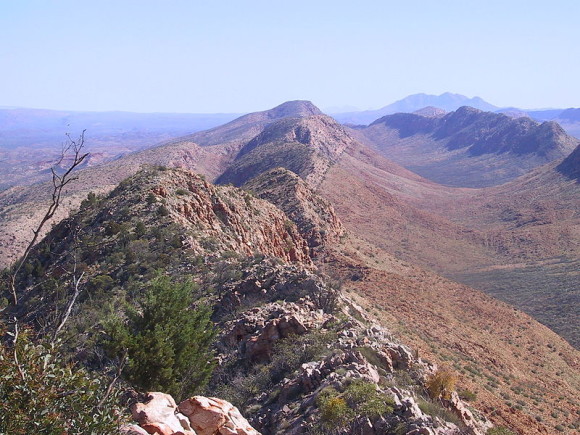 The MacDonnell Ranges in the Northern Territory. This is part of the Australian Outback. Wikipedia

One of the atmospheric drivers that pushed the increase in rainfall across Australia was the El Niño Southern Oscillation, or the ENSO. It is the driver that determines whether or not El Niño, La Niña, or neutral temperatures occur in the eastern Pacific Ocean. During this time period (2010-2011), La Niña had formed, meaning tropical surface waters in the eastern Pacific were cooler than average. In this pattern, rainfall is suppressed across the Eastern Pacific, but is typically enhanced in the tropical Pacific, Africa, South America, and Australia.

NCAR’s research also found two other climate drivers enhanced the rainfall across Australia. One of them included the Southern Annular Mode, which forced incredible amounts of rainfall into the interior of Australia. The interior, the famous Australian Outback, is ringed by coastal mountains and is often quite dry. When rain falls into Australia’s Outback, it stays inland instead of flowing into the ocean.

Note that the drop in sea level was only temporary. Since these weather patterns changed, and less rain has been falling in Australia than in 2010-2011, sea levels have been rising faster than ever at about 10 millimeters (0.4 inches) per year.

According to the Australian Government Bureau of Meteorology, 2010-2011 was a record-breaking wet period for this continent:

In 2010, Australia experienced its third-wettest year since national rainfall records began in 1900, with second place taken by 2011. Averaged across Australia, both years experienced rainfall well above the long-term average of 465 mm – 703 mm in 2010 and 708 mm in 2011. A number of new Australian rainfall records were set: wettest September, December and March on record and second-wettest October and February. May to October 2010 was the wettest ‘dry’ season on record in northern Australia, and July to December 2010 was the wettest second half of the year on record for Australia as a whole. 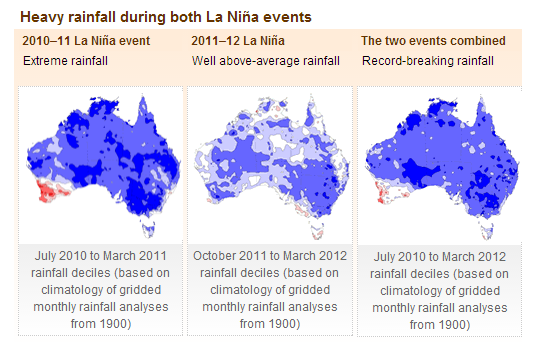 The leading researcher of the study, NCAR scientist John Fasullo, says that this research shows how complex weather and climate can be. They truly can. With every climate study comes more questions. For instance, it is uncertain how many times events like this may come together to produce unusual amounts of rainfall.

“It’s a beautiful illustration of how complicated our climate system is. The smallest continent in the world can affect sea level worldwide. Its influence is so strong that it can temporarily overcome the background trend of rising sea levels that we see with climate change.”

Bottom Line: Unusual weather patterns combined in 2010 and 2011 to produce record-breaking rainfall across Australia. In a new study led by NCAR scientist John Fasullo, researchers used satellite data to find that the mass of Australia increased during this time. At same time, global sea level rise dropped around 7 millimeters (about 0.3 inches). The scientists identified three climate drivers that led to the excess rainfall in Australia and thus to a temporary decrease in sea level rise from 2010 and 2011. Why did the rainfall never flow into the ocean? The soils and topography of Australia prevent almost all of its precipitation from running off into the ocean.