Can corals adapt to climate change?

A new study has uncovered evidence that corals may be adapting to climate change, but the response may not persist if CO2 emissions aren’t reduced.

The severe loss of coral reefs that is expected to occur over the 21st century may be offset somewhat if corals are able to adapt to the heat stress caused by climate change, a new study suggests. The study has uncovered evidence that corals may already be adapting to temperature changes in the ocean. However, reductions in coral bleaching are only expected to continue if greenhouse gas emissions are significantly reduced. The study was published on October 28, 2013 in Global Change Biology. 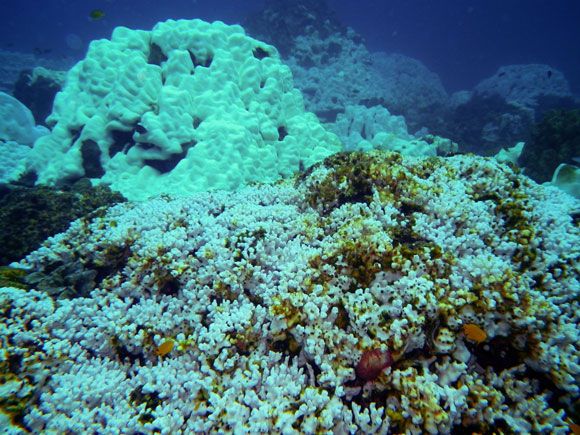 As the oceans warm in response to climate change, coral bleaching events are expected to become more frequent and pose a substantial risk to coral reef ecosystems around the world. This is of great concern to the scientific community because coral reefs harbor enormous amounts of biodiversity. They also protect shorelines from storm surges and support the livelihoods of many people through fishing and tourism related activities.

Current models predict that most reefs will experience mass bleaching events by midcentury. However, these models do not account for the ability of corals to adapt to heat stress. Adaption may occur, for example, if heat tolerant zooxanthellae were to evolve inside of the coral tissue or if corals started to produce heat shock proteins that improved their tolerance to heat stress.

Cheryl Logan, an assistant professor at California State University, and her colleagues used models to explore the future state of coral reefs under different climate change scenarios when adaptation responses were either included or excluded from the analyses. They found that the impacts of climate change on coral reefs were predicted to be less severe at the end of the 21st century if adaptive responses were included in models. Furthermore, their data suggests that some degree of adaptation may have already occurred in corals in response to warmer water temperatures during the 20th century. Dr. Logan commented on these findings in a press release. She said:

Earlier modeling work suggested that coral reefs would be gone by the middle of this century. Our study shows that if corals can adapt to warming that has occurred over the past 40 to 60 years, some coral reefs may persist through the end of this century.

Specifically, the results of the study suggest that bleaching rates could be as much as 20 to 80 percent lower than the rates currently expected for the year 2100 if adaption responses are considered, but that large reductions in bleaching will only be possible if there are also large reductions in carbon dioxide emissions. If ocean waters heat up too rapidly, it is unlikely that corals would be able to adapt. 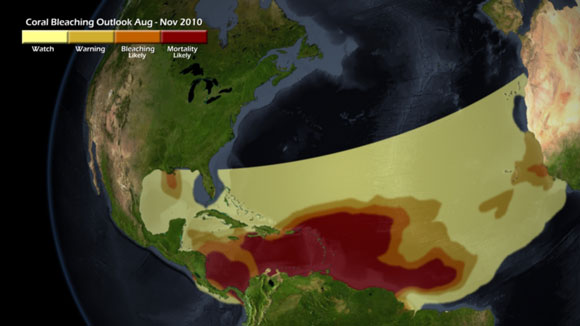 Mark Eakin, a co-author of the study and director of the National Oceanic and Atmospheric Administration (NOAA) Coral Reef Watch monitoring program also commented on the findings. He said:

The hope this work brings is only achieved if there is significant reduction of human-related emissions of heat-trapping gases. Adaptation provides no significant slowing in the loss of coral reefs if we continue to increase our rate of fossil fuel use.

As adaptation responses likely vary among different coral species, it is possible that some coral species will be lost even with significant reductions in greenhouse gas emissions. Moreover, this study did not consider the damage to coral reefs that will result from ocean acidification. Close monitoring of coral reefs will be important over the next several decades to determine how corals are responding to the threats they currently face from climate change.

The study was funded by the NOAA Coral Reef Conservation Program and Princeton University. Other co-authors of the study included John Dunne and Simon Donner.

Bottom line: A new study published in Global Change Biology on October 28, 2013 has uncovered evidence that corals may be adapting to the warmer ocean temperatures caused by climate change. However, reductions in coral bleaching are only expected to continue during the 21st century if greenhouse gas emissions are significantly reduced.

How do corals survive in the hottest reefs on the planet?