Camels once lived in the high arctic 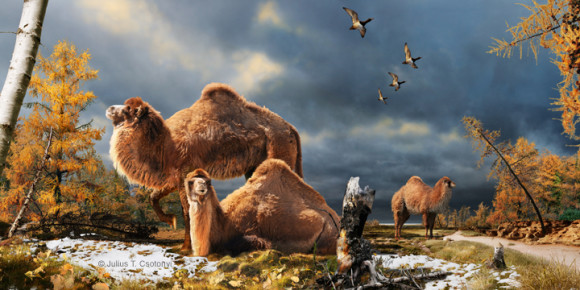 Illustration of the High Arctic camel on Ellesmere Island during the Pliocene warm period, about three and a half million years ago. The camels lived in a boreal-type forest. The habitat includes larch trees and the depiction is based on records of plant fossils found at nearby fossil deposits. Image credit: Canadian Museum of Nature.

The breakthrough came from Dr Mike Buckley, a NERC research fellow at Manchester University. It uses the collagen in fossils to build a unique profile of the proteins in the bone. This fingerprint means even small fragments of bone whose DNA has long since decomposed can be labelled.

The technique caught the eye of palaeontologists in Canada, in particular Professor Natalia Rybczynski, who led the study. The Canadian team had excavated a site on Ellesmere Island, the most northerly island of the high Arctic archipelago, but returned only bits of bone that were too broken and small to yield any information.

Buckley’s collagen procedure had successfully dated samples of 1.5 million years old, but Rybczynski hoped the cold weather at their site would have preserved the collagen in the bone fragments, and they could extend the time limits of the method.

What’s really interesting about this technique is that it goes far beyond the time scale you can get DNA from. So it allows us to use a large amount of fossils that are otherwise uninformative, explains Buckley.

The fossil bones of the High Arctic camel laid out in Natalia Rybczynski’s lab at the Canadian Museum of Nature. The fossil evidence consists of about 30 bone fragments, which together form part of a limb bone of a camel. Image credit: Martin Lipman

He suspected the bone fragments were from mammals but was surprised to find the collagen fingerprint of the bones matched most closely that of a camel. Buckley said:

Whilst Mike was looking at the collagen we were looking at the morphology and anatomy. We realised almost all of the pieces we had collected, about 30 or so, fit together, making up part of a tibia,’ says Rybczynski. ‘We were shocked by how big it was. All of the other fossils, like bear and deerlets, from the same time were much smaller than what we were seeing here. It’s about 30 per cent bigger than modern camels.

By combing the collagen fingerprint and reconstructing the morphology we can be quite confident that this fossil is the same as, or closely related to, the Paracamelus we see further south.

The Paracamelus is the oldest known ancestor of modern day camels, but it had never before been seen at such high latitudes. These fossil fragments, found on Ellesmere Island, are about 1,200 km further north than any previous camel fossil discovery.

The camel lived in a time of global warming. This high Arctic area was around 14-22°C warmer than it is today, and covered by forest. Although not a freezing wasteland, it was not the arid desert you expect to see a camel in. Rybczynski said:

This fossil is about 3.5 million years old, an era which was very important in Earth’s history. It was 2-3°C warmer globally, which is what we expect our climate to reach in the future, so climatologists are very interested in it.

Despite the warmer temperatures, the area still experienced harsh winters and four months of complete darkness.

This extreme weather may have given the camels an advantage when the ice age came and they were forced to move. The hump and wide flat feet which enable camels to live in the desert, may stem from their early beginnings in an equally extreme but much colder environment. Buckley said:

A camel’s wide flat feet are very good for functioning on soft substrate. Now they’re used in sand but they were equally suited to snow and tundra environments. Whilst the iconic hump, made from fat deposits, could have allowed the population to survive and reproduce in harsh climates like the six-month-long, freezing cold winters.

These camel traits are definitely well suited to the forest and tundra. It’s hard to say whether they originally evolved for that purpose, but it’s definitely possible.