Artificial light has transformed the night sky, a change researchers continue to link to health problems. 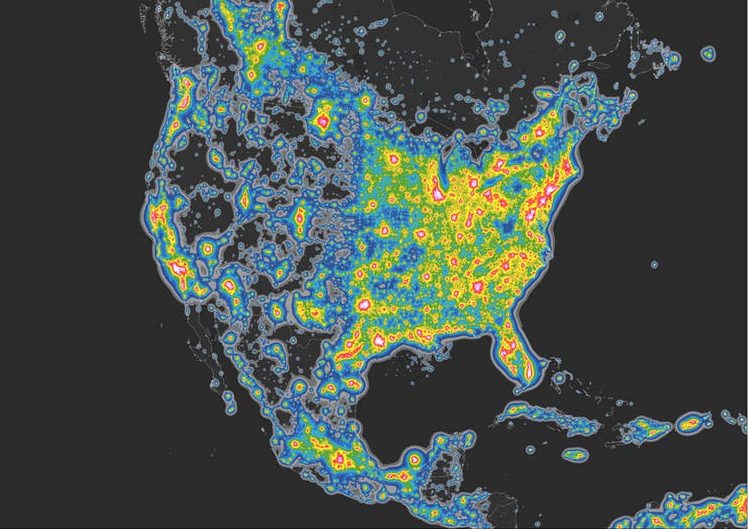 A study from Harvard has found greater risk of breast cancer in women who live in neighborhoods that have higher levels of outdoor light during the night.

The findings are based on the Nurses’ Health Study (NHS), which has for decades been advancing our understanding of risks to women’s health.

For this study, epidemiologist Peter James and colleagues followed nurses in the NHS for breast cancer occurrence from 1989 to 2013. The home of each of 109,672 nurses was geocoded, and the average light level in the immediate neighborhood at night was estimated from satellite images taken by the Defense Meteorological Satellite Program. These estimates were updated over the 15-year follow-up period. By 2013, a total of 3,549 new cases of breast cancer had been diagnosed, about what’s expected among this number of women.

The study found a direct relationship between a woman’s neighborhood nighttime light level before diagnosis and her later risk of developing breast cancer: The higher the light level, the higher the risk. These findings held even when taking into account many other factors that may also affect risk such as age, number of children, weight, use of hormone medications and a long list of additional potential confounders.

Of importance if confirmed in more studies, the relationship was strongest in young women diagnosed before menopause. James also conducted many further subgroup analyses after the primary objective of the study had been verified; these subgroup findings may or not be seen in future studies. Two that stood out are that the association was confined to current and former smokers, and nurses with a history of night work.

The study is significant because it adds a strong piece of evidence to the growing body of studies supporting the idea that excessive electric light exposure at night increases a woman’s risk of breast cancer.

Why was the study done?

The idea that electric light at night (LAN) might explain a portion of the breast cancer pandemic dates back to 1987. It was pretty far-fetched at the time because light doesn’t seem toxic in any way that could cause cancer. It can’t break chemical bonds and damage DNA, and it’s not a hormone like estrogen, which, in excess, can cause changes in the breast that can lead to cancer. Light is, by definition, the visible part of the electromagnetic spectrum, and so it does not include X-rays or even ultraviolet radiation, which can burn skin.

Light is an exposure that challenges the conventional definition of a toxic substance. If a little asbestos is bad for you, more is certainly worse. The same holds for ionizing radiation (like X-rays), dioxin, and lead.

The difference is that the effects of exposure to light on human health depend crucially on timing. Over millions of years, we have evolved with a daily cycle of about 12 hours of bright light (the sun) and about 12 hours of dark. So during the day, our body expects light, whereas during the night it expects dark. There is a deep biology to this, and electric light is throwing it out of kilter.

One perplexing possible consequence of this light exposure is an increased risk of breast cancer in women. Researchers, including me, have been exploring this possible link in part because breast cancer has no single known major cause. This is unlike many of the other common cancers such as lung, liver, cervix and stomach, for which a major cause has been identified for each; these major causes are, respectively, smoking, hepatitis viruses, human papilloma virus and the bacterium Helicobacter pylori.

But how could the nighttime light level outside a woman’s home in her neighborhood affect her risk of breast cancer?

The rationale for studying the outside light level is the assumption that communities that shine brightly to a satellite at night are composed of people who in general are bathed in LAN: They have greater exposure in their home, outside on the street, and for evening entertainment in the city. So, the satellite data are thought to be a surrogate, or a proxy, for this actual LAN exposure to each woman, particularly in the evening before sleep. 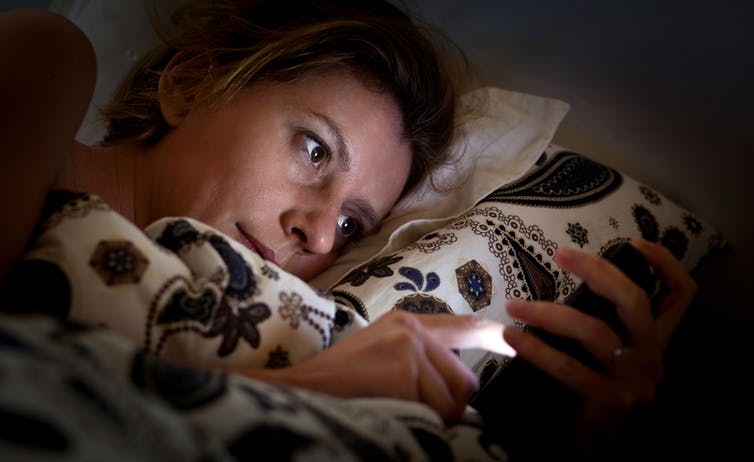 Blue light is more likely to delay the body’s transition to nighttime physiology and the natural rise in melatonin, which has been shown in rats to have a strong anti-cancer effect. Image via Shutterstock.

Too much evening light can delay the normal transition to nighttime physiology that should begin at dusk. An important part of this transition is a substantial rise in the hormone melatonin in the blood. Melatonin has been shown to have strong anti-cancer effects in lab rats. The shorter the wavelength of the light – that is, light that has more blue relative to other colors – the greater impact on lowering melatonin and delaying transition to nighttime physiology.

My colleagues and I did a similar analysis using satellite data in the state of Connecticut. We also found a stronger effect in younger women, as did another study from 2014 conducted among teachers in California. The studies from Harvard and from California are superior to ours because they both had individual-level data on many more potential confounders than just age, which we did not. Yet all three studies do point in the same direction.

The estimate of elevated risk of breast cancer in the new Harvard study is modest, at only 14 percent for the most highly lit neighborhoods, compared to the least.

If true, it would still account for many cases. However, there are two concerns about this estimate’s validity, which are actually opposites of each other.

On the one hand, the apparently elevated risk may be due to other factors that go along with more highly lit neighborhoods, and the LAN actually has no impact. This is called confounding. The Harvard study is one of the best-equipped studies ever conducted of women’s health to deal with this possibility because it has individual-level data on so many characteristics recorded for each subject, such as age, weight, smoking, body mass index, income and on and on.

The researchers included these factors into their statistical models, and it did not change their estimate of the effect for LAN on breast cancer risk. However, the information on these other factors is not perfect, and there may still have been some of what is called “residual confounding.”

On the other side, if evening and late-night electric light exposure actually does increase a woman’s risk of breast cancer, then this estimate of 14 percent probably understates the true effect, and maybe by a lot.

The reason is that the estimate of LAN exposure from the satellite images is only a surrogate for the light that would actually matter, which is each woman’s individual exposure to light in her eyes during the evening and night whether she is home or out and about.

Another limitation of epidemiological studies, like the Harvard one, is an effect known as exposure misclassification, which tends to underestimate the level of health risk when using a surrogate to measure the real exposure.

If the results from Harvard are real, and too much light at night from any and all sources does increase a woman’s risk of breast cancer, then retrofitting street lighting all across America should be done in a way that does not further contribute to the problem. It would be best to select luminaires that are as dim as possible, and weak in the short wavelengths (e.g., blue), yet still consistent with accomplishing their intended purpose.

Electric light is one of the signature inventions of an inventive species. But its overuse has caused an obliteration of night in much of the modern world. The loss of night has consequences for all forms of life, including us. And the mounting evidence for a connection to breast cancer is alarming.

This article was updated on August 21, 2017, to indicate that the association between light level and risk of breast cancer was found in current and former smokers and nurses with a history of night work.

Bottom line: A Harvard study found a direct relationship between a woman’s neighborhood nighttime light level before diagnosis and her later risk of developing breast cancer: The higher the light level, the higher the risk.