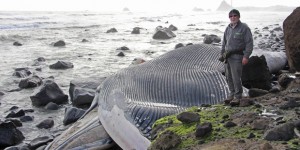 Scientist Callue Lilley stands next to a blue whale that washed ashore near New Plymouth, the largest city in Taranaki, New Zealand. Photo by Sorrel Hoskin via the New Zealand Herald.

Thank you! Your submission has been received!
Oops! Something went wrong while submitting the form.
END_OF_DOCUMENT_TOKEN_TO_BE_REPLACED