It’s now 65 percent contained (as of June 18), and thousands of people are still waiting to return to their homes as firefighters continue to battle the blaze.

Dry weather and warm temperatures produced dangerous wildfire conditions across parts of Northeast Colorado over this past week. Two fires – the Big Meadows and Black Forest wildfires – have been burning since June 10 and June 11, 2013. The Big Meadows wildfire has burned up to 604 acres, but it’s currently 95 percent contained. The Black Forest wildfire has burned nearly 14,280 acres and is only 65 percent contained at this time. Rainfall chances are possible across these areas today (June 18), which is good news for a region trying to battle the blaze. As of today, two people have died from the Black Forest wildfire. No one is certain yet how the fire started. According to Inciweb, as of June 17, 2013, 480 structures have been lost, and the estimated costs to date are near $5,555,950. This total makes the Black Forest wildfire the most destructive wildfire in Colorado’s history, surpassing the Waldo Canyon fire of 2012, which destroyed 346 homes. As firefighters struggle to contain the blaze, there are still thousands of people waiting patiently to return to their homes.

The Black Forest wildfire began on June 11, 2013 as the region was experiencing a heatwave and breezy conditions. Recent rainfall and cooler temperatures have now helped firefighters contain and control the fire, keeping it from spreading to other areas. A few storms have triggered individual wildfires after lightning struck the area, but firefighters were able to contain them before they got out of control. More storms will develop today (June 18) as a slight risk of severe storms are possible in this area. While clouds and rain will help the fires, lightning and gusty winds could help spread or cause further problems.

The origin of this fire started is still unknown. The main speculation is that it is likely human-related. Law enforcement will continue to investigate how this fire originated, and if they figure out how it started, we will let you know.

The Big Meadows wildfire is not nearly as large or as uncontrollable as the Black Forest wildfire, but it has caused numerous problems. A lightning strike on June 10, 2013 started the fire five miles north of Grand Lake, Colorado. It has since burned through 604 acres. People were forced to evacuate in this area, and many of the trails were closed off as the fire continued to burn. Now 95 percent of the fire has been contained, but there are still a few trails that remain closed until conditions calm down. Starting today, overnight campsites will reopen in Timber Creek. 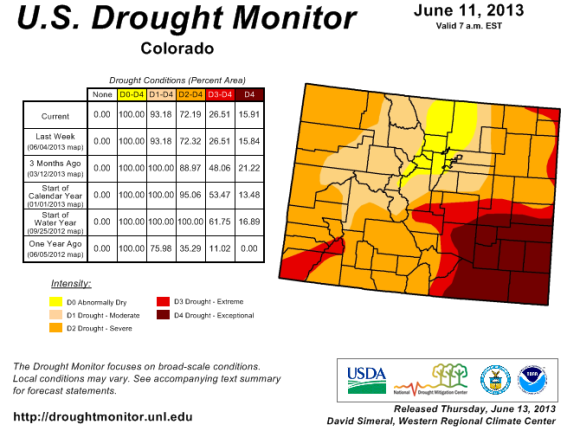 Severe to exceptional drought reins over 72 percent of the state of Colorado. Southeastern Colorado is experiencing the driest conditions as nearly 16 percent of the region is under exceptional drought, the highest drought level intensity. It looks as though drought conditions will continue to persist throughout the summer of 2013, with the majority of the western United States continuing to see very little rainfall. Meanwhile, a weather pattern has continued to produce rainy conditions across the eastern U.S., while the western U.S. continues to see high pressure that is bringing with it dry conditions and warm temperatures. 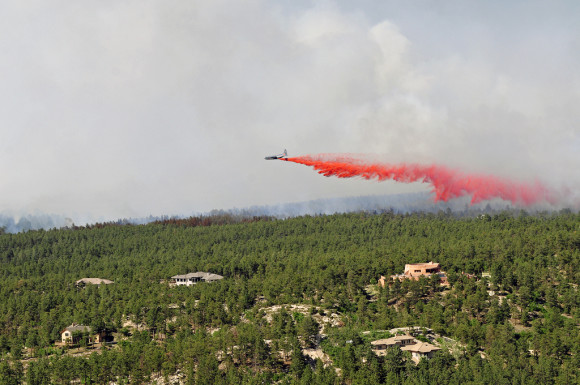 Bottom line: The Black Forest wildfire is the most destructive wildfire to burn in Colorado’s known history, surpassing the Waldo Canyon wildfire from 2012. The Black Forest wildfire is 65 percent contained, and thousands of people are still waiting to return to their homes as firefighters continue to battle the blaze. Firefighters are hoping to contain the fire by Thursday, June 20, 2013. Two people have died from the Black Forest wildfire, and we still do not know the exact cause of how the fire started. Meanwhile, the Big Meadows wildfire is 95 percent contained, and has burned roughly 604 acres. Prayers go out to all of the victims affected by these wildfires. Unfortunately, it looks like the fires will continue to burn as drought conditions are expected to continue throughout the summer.