Bizarre-looking fossil has finally been identified

This strange fossil – a worm-like creature with legs, spikes and a head that’s difficult to distinguish from its tail – has been linked with a group of modern velvet worms. 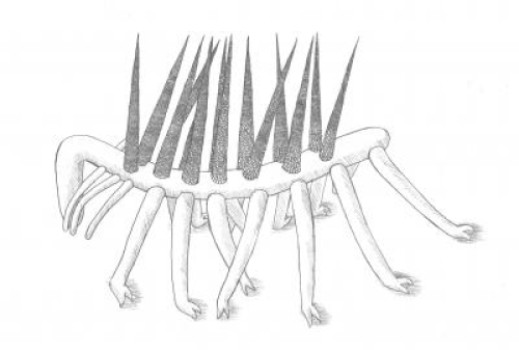 This is a reconstruction of the Burgess Shale animal Hallucigenia sparsa. Image credit: Elyssa Rider

One of the most bizarre-looking fossils ever found – a worm-like creature with legs, spikes and a head difficult to distinguish from its tail – has found its place in the evolutionary Tree of Life, definitively linking it with a group of modern animals for the first time.

The animal, known as Hallucigenia due to its otherworldly appearance, had been considered an ‘evolutionary misfit’ as it was not clear how it related to modern animal groups. Researchers from the University of Cambridge have discovered an important link with modern velvet worms, also known as onychophorans, a relatively small group of worm-like animals that live in tropical forests. The results are published in the advance online edition of the journal Nature.

The affinity of Hallucigenia and other contemporary ‘legged worms’, collectively known as lobopodians, has been very controversial, as a lack of clear characteristics linking them to each other or to modern animals has made it difficult to determine their evolutionary home.

What is more, early interpretations of Hallucigenia, which was first identified in the 1970s, placed it both backwards and upside-down. The spines along the creature’s back were originally thought to be legs, its legs were thought to be tentacles along its back, and its head was mistaken for its tail.

Hallucigenia lived approximately 505 million years ago during the Cambrian Explosion, a period of rapid evolution when most major animal groups first appear in the fossil record. These particular fossils come from the Burgess Shale in Canada’s Rocky Mountains, one of the richest Cambrian fossil deposits in the world.

Looking like something from science fiction, Hallucigenia had a row of rigid spines along its back, and seven or eight pairs of legs ending in claws. The animals were between five and 35 millimeters in length, and lived on the floor of the Cambrian oceans.

A new study of the creature’s claws revealed an organization very close to those of modern velvet worms, where layers of cuticle (a hard substance similar to fingernails) are stacked one inside the other, like Russian nesting dolls. The same nesting structure can also be seen in the jaws of velvet worms, which are no more than legs modified for chewing.

Read more from the University of Cambridge