Golden-winged warblers in Tennessee fled their breeding territories more than 24 hours before a tornado outbreak. What tipped them off? 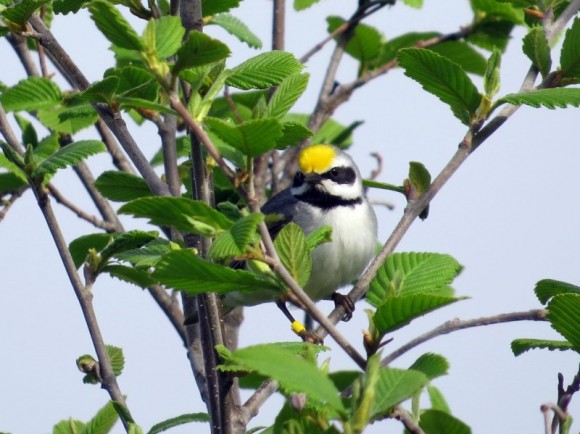 This golden-winged warbler spends the breeding season in the Cumberland Mountains of Tennessee.
Photo credit: Henry Streby and Gunnar Kramer

A group of golden-winged warblers in Tennessee apparently knew in advance that a storm was coming – well before any local signs of troubling weather – and left the scene. The birds fled one to two days ahead of the April, 2014 supercell that spawned 84 confirmed tornadoes and killed at least 35 people, according to a report in the Cell Press journal Current Biology on December 18, 2014.

How did these tiny birds know that a storm was approaching when it was still 250-560 miles away? Researchers at the University of California at Berkeley think that infrasound – sound with a frequency too low to be detected by humans – was their early warning sign. 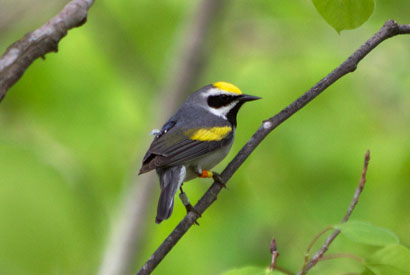 This male golden-winged warbler is carrying a geolocator on its back (appears black with white light sensor) and identification bands on its legs. Photo credit: Gunnar Kramer

The discovery was made quite by accident while researchers were testing whether the tiny warblers could carry geolocators on their backs. It turns out they can, and much more. With a big storm brewing, the birds took off from their breeding ground in the Cumberland Mountains of eastern Tennessee, where they had only just arrived, for an unplanned migratory event. All told, the warblers travelled 1,500 kilometers in five days to avoid the historic tornado-producing storms.

Henry Streby of the University of California, Berkeley, said:

The most curious finding is that the birds left long before the storm arrived. At the same time that meteorologists on The Weather Channel were telling us this storm was headed in our direction, the birds were apparently already packing their bags and evacuating the area.

The birds fled from their breeding territories more than 24 hours before the arrival of the storm, Streby and his colleagues report. The researchers suspect that the birds did it by listening to infrasound associated with the severe weather, at a level well below the range of human hearing. Streby said:

Meteorologists and physicists have known for decades that tornadic storms make very strong infrasound that can travel thousands of kilometers from the storm.

While the birds might pick up on some other cue, he added, the infrasound from severe storms travels at exactly the same frequency the birds are most sensitive to hearing. 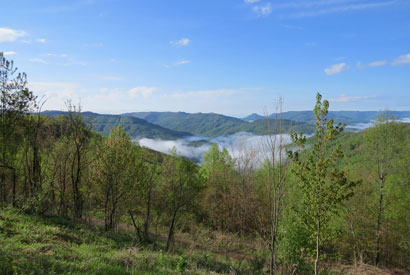 The Cumberland Mountains of eastern Tennessee, where a population of golden-winged warblers breeds each summer. Photo credit: Henry Streby

The findings show that birds that follow annual migratory routes can also take off on unplanned trips at other times of the year when conditions require it. That’s probably good news for birds, as climate change is expected to produce storms that are both stronger and more frequent. But there surely must be a downside as well, the researchers say. Streby said:

Our observation suggests [that] birds aren’t just going to sit there and take it with regards to climate change, and maybe they will fare better than some have predicted. On the other hand, this behavior presumably costs the birds some serious energy and time they should be spending on reproducing.

The birds’ energy-draining journey is just one more pressure human activities are putting on migratory songbirds.

In the coming year, Streby’s team will deploy hundreds of geolocators on the golden-winged warblers and related species across their entire breeding range to find out where they spend the winter and how they get there and back. Streby said:

I can’t say I’m hoping for another severe tornado outbreak,but I am eager to see what unpredictable things happen this time.

Bottom line: A group of golden-winged warblers in Tennessee fled one to two days ahead of the April, 2014 supercell that spawned 84 confirmed tornadoes and killed at least 35 people, according to a report in the Cell Press journal Current Biology on December 18, 2014.