Birds respond to birdsong much like humans do to music

Scientists have discovered that white-throated sparrows react to birdsong in a way that is similar to how our nervous system responds when we listen to music.

Scientists have discovered that white-throated sparrows react to birdsong in a way that is similar to how our nervous system responds when we listen to music. The research was published on November 28, 2012 in the journal Frontiers in Evolutionary Neuroscience. 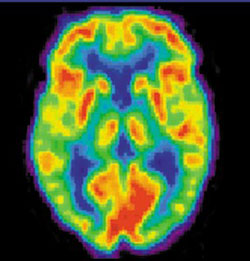 Music lights-up many areas of our brain. Image Credit: NIH.

When humans listen to music we like, the music activates a neural reward system in our brain. This reward system, also known as the mesolimbic reward pathway, involves several structures in our brain. If you have ever experienced the “chills” when listening to a particularly good piece of music, that’s caused by a sudden release of dopamine into your mesolimbic reward pathway.

Scientists have long wondered if music and the songs of birds share some of the same qualities. In birds, males will sing to females to attract them during times of courtship. Scientists examined the brains of female white-throated sparrows to see if their neural reward system was activated by male birdsong.

The song of white-throated sparrows is particularly musical in quality.

The scientists found that the neural reward system was activated in female birds that were in a breeding state when they listened to a male’s birdsong. The pattern of neural activation that the scientists observed in birds mirrored the pattern seen in people who were listening to music that they enjoy. The neural reward system was not activated in female birds that were not in a breeding state.

Interestingly, when male birds listened to another male’s birdsong, their neural pathways responded in a pattern that was similar to that observed in people listening to unpleasant music. Male birds will often sing to other males over territorial disputes. In the paper, the scientists were careful to say that they could not conclude that male birds found the songs of other males unpleasant. They could only conclude that the effects of male bird song on other birds depended on the sex and the hormonal status of the listener.

Sarah Earp, lead author of the study, commented on the findings in an article for eScienceCommons. She said:

The neural response to birdsong appears to depend on social context, which can be the case with humans as well. Both birdsong and music elicit responses not only in brain regions associated directly with reward, but also in interconnected regions that are thought to regulate emotion. That suggests that they both may activate evolutionarily ancient mechanisms that are necessary for reproduction and survival.

Sarah Earp was an undergraduate at Emory University at the time this research was conducted. She is now a medical student at the Cleveland Clinic. Donna Maney, co-author of the study, is a neuroscientist and associate professor in psychology at Emory University. 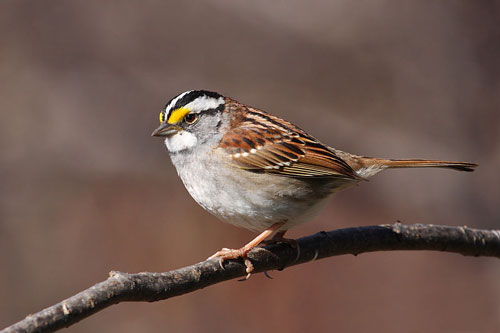 Bottom line: Scientists have discovered that white-throated sparrows react to birdsong in a way that is similar to how our nervous system responds when we listen to music. The research was published on November 28, 2012 in the journal Frontiers in Evolutionary Neuroscience.