Although playing recorded song to lure a bird into view is frowned upon by birdwatchers, some people still do it. Will these new findings get them to stop?

A scientific study has confirmed something that most birdwatchers have known for years. Playing the recorded song of a bird species in the wild, simply to lure it into view, can harm the bird. The recorded song may be heard by the bird as a challenge from a competitor, resulting in unnecessary stress on the bird. Or the song could distract the bird from normal activities, such as caring for its young. Results of field experiments that studied how birds reacted to recorded birdsong were reported in an October 11, 2013 paper published in PLOS One. Scientists were able to document how recorded song playbacks disrupted normal behavior, causing the birds to sing longer than usual.

Rufous antpitta, one of the bird species in this study, are furtive little birds that live on the forest floor. Image via Francesco Veronesi at Flickr.com.

At its most basic definition, birdwatching is simply about identifying wild birds by their appearance and song, as well as observing their behavior in their natural habitat. It’s a wonderful hobby that forges a deep connection with the natural world, one that I’ve had the privilege to enjoy for more than 20 years.

Birdwatchers, also known as birders, love to keep lists of birds they’ve seen for record-keeping and for a little good-natured competitive bragging. Some birders regard it as a sport, competing to identifying as many bird species as possible during an event or at a place, and also by adding them to a life list of all birds they’ve ever seen.

Most birders I know take great pains to avoid disturbing the birds they watch. But, like all hobbies, birding has its extreme side; some birders are so driven by competition that they resort to using recorded birdsong to draw out a bird, placing their listing goals ahead of the bird’s well-being.

And it’s possible to inadvertently ruffle some feathers with recorded birdsong. Some years ago at a park, I was listening to birdsong recordings in an iPhone birding app, trying to identify the song of a bird hidden in a nearby tree. The volume, unfortunately, was loud enough for the bird to hear and he started responding to my birdsong recording. Feeling utterly mortified when I realized what I had done, I immediately apologized to the bird and fled in tears!

Lesson learned: be aware of how your presence is affecting wildlife while you’re out watching them. 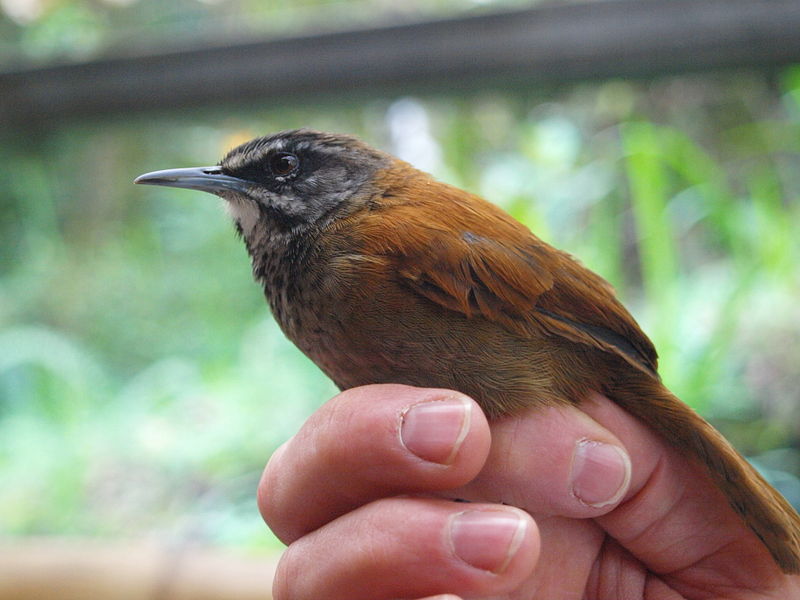 Plain-tailed wren, the other bird species in the birdsong study, is found nesting in bamboo thickets. Image credit: Browerk, via Wikimedia Commons.

In a press release about the recent study, the paper’s lead author, Berton C. Harris of Princeton University, said:

Playbacks would be harmful if a species becomes stressed, expends energy, or takes time away from other activities to respond to these recordings.

Birds could be wasting their time and energy by responding to non-existent intruders. When male birds respond to birdwatchers’ playbacks to defend their territories, they may spend less time caring for their nestlings, experience higher levels of stress hormones or be subject to a romantic coup from other males while away from their mates.

Harris and his team studied two species in the Ecuadoran forest of the South American Andes, plain-tailed wrens and rufous antpittas. They played song recordings by these birds, then observed them for an hour to see how it changed their behavior. For both species, the birds spent more time singing than they normally would, an unnecessary expenditure of energy.

Some species may also be more sensitive than others in how they respond to playbacks. Over a two-and-a-half week period, plain-tailed wrens were subjected to daily recorded song. For the first 12 days, they spent more time than usual singing back, but eventually became used to it and stopped reacting to the recorded song. Further research is needed to determine how other bird species react to repeated playbacks, especially when doing field research on endangered or threatened bird species.

A rufous antpitta, hopping about the forest floor.

Birdwatchers are ardent conservationists, and they want to minimize their impact while observing secretive birds. They promote environmental conservation by funding ecotourism infrastructure, especially in developing countries, where tourism can provide local people alternatives to habitat exploitation. Unfortunately, as evidenced by this research, birdwatchers may also have negative effects on ecosystems.

Studies of the effects of playback on bird reproductive success have not yet been done. And until such studies are available, it’d be wise for birdwatchers to be cautious of the negative effects. For example, it might make sense to minimize the use of playback with endangered species or in areas that host a lot of birdwatchers.

Bottom line: Using recorded birdsong to lure a bird species out of the treetops is detrimental to the bird’s well-being because it needlessly disrupts its normal behavior and causes the bird undue stress. As a result, the bird expends its limited energy reacting to what it thinks is a challenge or threat to its territory by singing more frequently.