Biggest ever US methane leak from California blowout

The Aliso Canyon leak, finally plugged on February 11, vented 100,000 tons of methane into the atmosphere – a climate impact equivalent to the annual emissions of half a million cars, say scientists.

The natural gas well blowout in Aliso Canyon, California, first reported on October 23, 2015, vented over 100,000 tons of the powerful greenhouse gas methane into the atmosphere before the well was finally sealed almost four months later, on February 11, 2016. That’s the largest methane leak in U.S. history, according to the first study of the accident, published in the journal Science on February 25, 2016.

The research showed that during the peak of the Aliso Canyon event, enough methane poured into the air every day to fill a balloon the size of the Rose Bowl. Total emissions during the 112-day event were equal to one-quarter of the annual methane pollution from all other sources in the Los Angeles basin combined.

The disaster’s impact on climate, said the researchers, will be equivalent to the annual greenhouse gas emissions from over half a million passenger cars.

Co-lead scientist and pilot Stephen Conley of Scientific Aviation and UC Davis said first readings in early November were so high he had to recheck his gear. He said in a statement:

It became obvious that there wasn’t anything wrong with the instruments. This was just a huge event.

At the time, Conley and his specially equipped plane were working with University of California Davis on a California Energy Commission project searching for pipeline methane leaks. The state agency asked him to overfly the area around the breached SoCalGas well.

Conley and his team’s measurements confirmed that high concentrations of methane and ethane were surging from the breached well into the densely populated San Fernando Valley.

Eventually, more than 5,726 families were evacuated and Gov. Jerry Brown declared a state of emergency. 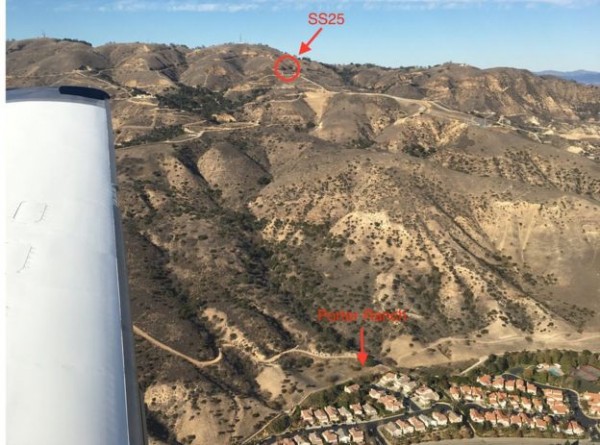 The leaking well, marked SS25 in this picture, is very close to the community of Porter Ranch. Image: Stephen Conley

The analysis found that at its peak, the blowout doubled the rate of methane emissions from the entire Los Angeles basin and temporarily created the largest known human-caused point source of methane in the United States, twice as large as the next-largest source, an Alabama coal mine.

NOAA’s Tom Ryerson was co-lead scientist on the study. He said:

The disaster will substantially impact California’s ability to meet greenhouse gas emission targets for the year, the researchers said.

Bottom line: The Aliso Canyon, California natural gas well blowout was the largest methane leak in U.S. history, according to the first study of the accident, published in the journal Science on February 25, 2016. The leak, first reported on October 23, 2015, vented over 100,000 tons of the powerful greenhouse gas methane into the atmosphere before the well was finally sealed almost four months later, on February 11, 2016.

Read more from the University of California Davis