Big temperature swing this week for U.S. and Canada

Despite rumors, it’s not a polar vortex that’s responsible for the unseasonably cool weather in the eastern U.S. and Canada this week.

In the middle of summer, you expect to see major heat waves hit parts of the United States with temperatures in the 90s and heat indices climbing over 100 degrees Fahrenheit. However, Mother Nature believes in switching things up. As the week of July 14, 2014 begins, a major dip in the jet stream across the eastern U.S. and Canada will rush in extremely cool temperatures for this time of the year. Parts of the U.S. Midwest could see temperatures 10 to 20 degrees below average. There are rumors that a polar vortex is responsible for the cool weather this upcoming week. However, that’s not the case in this situation. 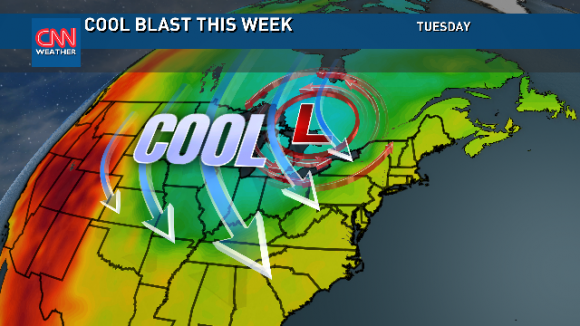 Much cooler weather will occur across the Eastern half of the U.S. this week. Image Credit: CNN Weather

The jet stream, which is like a river of fast moving winds that push from west to east in the upper parts of our atmosphere, will amplify and shift down into the U.S. Southeast by the middle of the week. Behind the jet, very cool temperatures will spread into parts of the Northern Plains, the Midwest, and parts of the Southeast. Humidity levels will lower, and morning temperatures will be very refreshing and fall-like.

The amplification of the jet stream across the East Coast means a huge ridge will build across the western United States and extend into Canada. The ridge will raise temperatures 10-20 degrees above average. Heat advisories have already been issued for parts of the Pacific Northwest as temperatures could climb into the mid 90s with a few spots reaching 100°F. It might be cool where you live this week, but not if you live in Portland, Oregon. 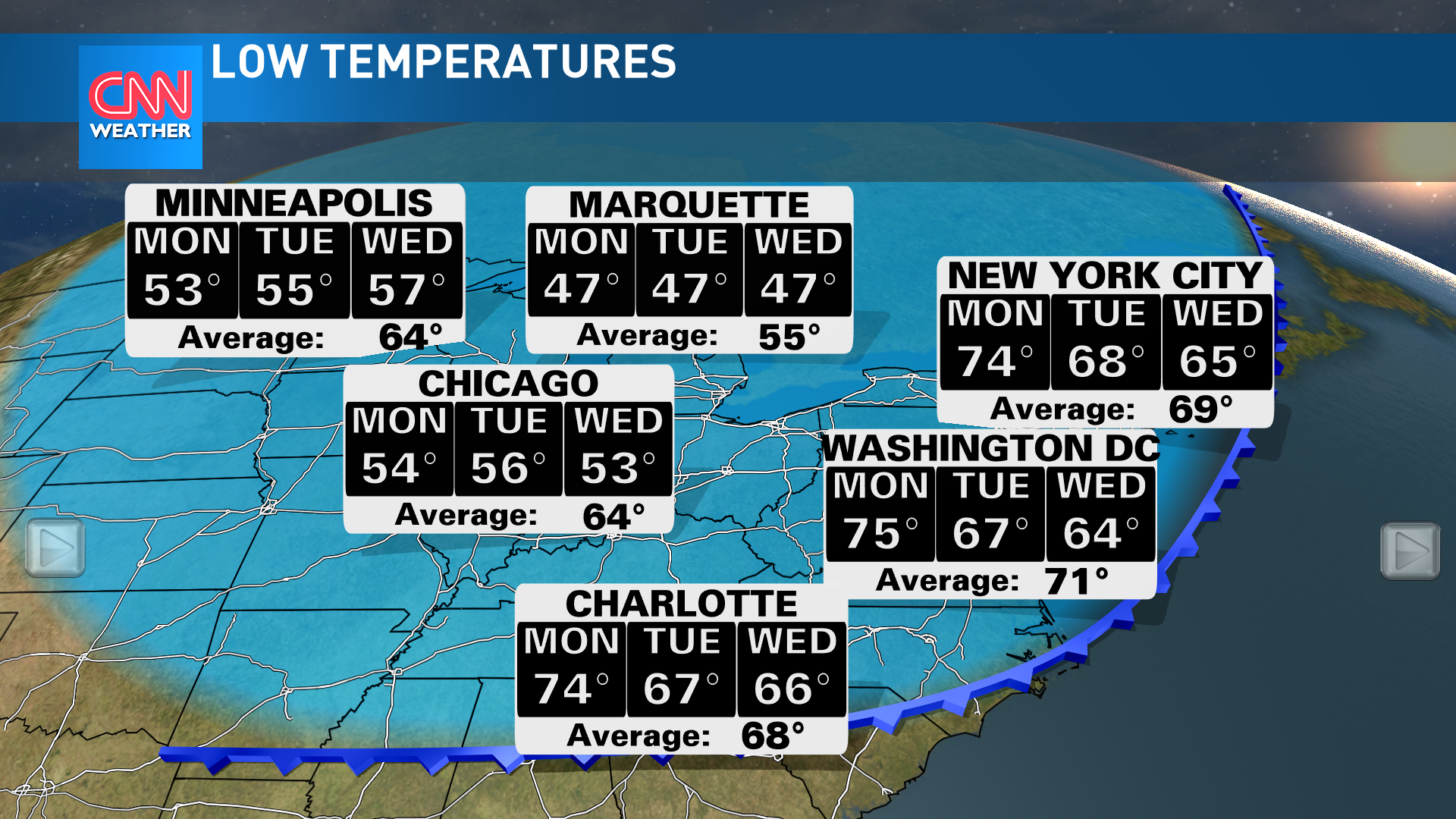 Check out the forecast of low temperatures for the start of the week. Image Credit: CNN Weather

Rumors about why the jet stream is digging so far south into the U.S. have been spreading throughout social media. A few places were calling it the return of the polar vortex. As you might recall, the ‘polar vortex’ was a big name that came out this past winter, when arctic air spilled into the eastern half of the United States. You can read more about exactly what the polar vortex truly is, but it is safe to say that the polar vortex is not responsible for this shift in weather across North America.

First of all, the polar vortex never moves or shifts from the pole to the south. Waves or pieces of energy from the vortex can swing through, but the actual vortex stays centered across the North Pole. The polar vortex is amplified in the winter months, but is suppressed in the summer months in the Northern Hemisphere. 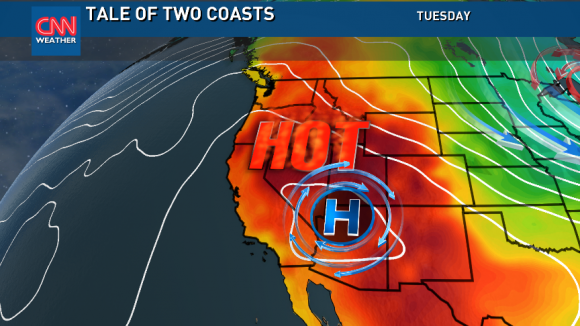 Cool in the East, but big heat in the Western U.S./Canada. Image Credit: CNN Weather

Jeff Masters explains in his blog how this unusual amplification of the jet stream across North America is partially thanks to the Super Typhoon Neoguri that struck Japan last week.

The large and powerful nature of this storm has set in motion a chain-reaction set of events that will dramatically alter the path of the jet stream and affect weather patterns across the entire Northern Hemisphere next week. Neoguri will cause an acceleration of the North Pacific jet stream, causing a large amount of warm, moist tropical air to push over the North Pacific. This will amplify a trough low pressure over Alaska, causing a ripple effect in the jet stream over western North America, where a strong ridge of high pressure will develop, and over the Midwestern U.S., where a strong trough of low pressure will form. This jet stream pattern is similar to the nasty “Polar Vortex” pattern that set up during the winter of 2014 over North America, and will cause an unusually cool third week of July over the portions of the Midwest and Ohio Valley, with temperatures 10 – 20°F below average.

Andrew Freedman, writer for Mashable, discussed how the amplification of the jet stream is not related to the polar vortex.

This cannot strictly be viewed as an actual polar vortex event, but there are some similarities to the weather pattern in place during the winter of 2013-14.

Here’s how the National Weather Service’s Weather Prediction Center in Maryland describes the upcoming event (ALL CAPS is their style, because apparently, government weather forecasters like to shout):

A HIGHLY ANOMALOUS AMPLIFICATION OF THE FLOW ACROSS NORTH AMERICA IS INDICATED BY THE GLOBAL NUMERICAL MODELS AT THE MEDIUM RANGE. A DEEP UPPER LOW… NOT THE POLAR VORTEX AS ITS ORIGINS ARE FROM THE NE PACIFIC… WILL SWING THROUGH THE GREAT LAKES EARLY NEXT WEEK WITH AN IMPRESSIVE COLD SHOT OF AIR INTO THE CENTRAL AND THEN SOUTHERN PLAINS AND THE MIDWEST.

The debate on whether this is a polar vortex event began when the National Weather Service in Chicago tweeted out the following graphic: 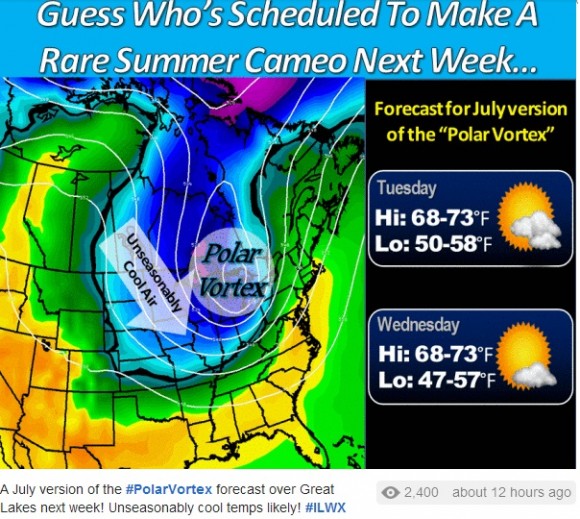 Since then, meteorologists have tried to tag this weather event on twitter by writing #NotThePolarVortex.

Finally, Jason Samenow of the Capital Weather Gang wrote a fantastic article explaining how the weather service confirms that the major cool down is not from the polar vortex. On top of that, several meteorologists agree with that statement.

Many meteorologists reject calling this week’s cold air outbreak a true polar vortex event because the deep pool of cool air feeding into the north central U.S. is not originating from the polar latitudes or within that Arctic ‘fence,’ but rather from the northeast Pacific.

Bottom line: Either way you look at it, an impressive change in temperatures will occur this week across parts of North America. Eastern half will see much cooler weather with temperatures 10-20 degrees below average. Meanwhile, the western half will bake with temperatures climbing in the 90s and even 100s. Big changes in the jet stream typically begin to occur in the fall and winter months as cooler air begins to drive further south. However, Mother Nature doesn’t go by the rules, so some areas will have a taste of fall while others really meet the heart of summer.