It takes more than big horns to be the fittest sheep in the herd.

In the world of Soay sheep, males with bigger horns get all the girls. It’s not necessarily that lady sheep go for big horns (they might, but you’d have to ask them yourself). Rather, the horns are a weapon used during the mating season, when competing males duke it out for available females. It’s your standard “first you get X, then you get the power, then you get the women” formula. Males with bigger horns are more likely to win a fight and thus more likely to mate and pass their genes to the next generation. Over time, this kind of sexual selection – in which an organism’s overall evolutionary fitness is boosted by its superior ability to reproduce – should result in a population of sheep where all the males have big horns. And yet about 13% of the males develop not just smaller horns, but pathetic little stubby horns, or “scurs”. Why such evolutionary losers persist is something of a puzzle. With their puny horns, their only shot at mating is during those fleeting moments when dominant males aren’t guarding all the women. So why are their genes still in the pool? 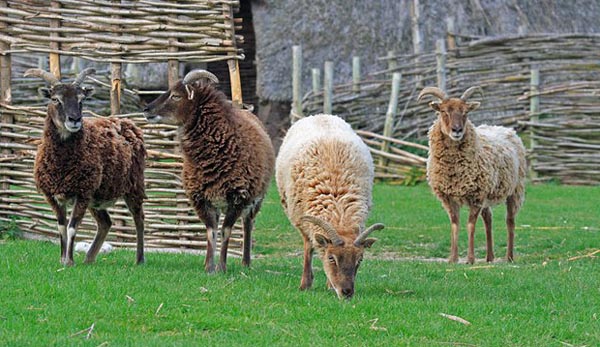 Lady Soay sheep can have normal horns (like these in the picture), scurs, or no horns. Image: Simon Barnes.

A team of scientists who have spent the past two decades studying Soay sheep – an early breed of domestic sheep still found on an archipelago off the western coast of Scotland – had previously discovered that the bulk of variation in horn size could be attributed to a single gene. The gene (RXFP2 to its friends) comes in two flavors – or alleles, if you prefer more scientific terminology – with the Ho+ allele yielding normal sized horns, while the HoP allele is responsible for the dreaded scurs. Ho+ appears to be the dominant allele. Most individuals with either Ho+Ho+ or Ho+HoP genotypes develop perfectly normal horns. But about half of males carrying two HoP alleles are scurred for life.

In their latest study, suspecting that the HoP allele might confer some benefit along with its obvious drawback, the researchers looked not just at reproductive success but also at the annual survival of sheep with each of the three possible RXFP2 gene combinations. Sexual selection, after all, isn’t the only thing driving changes in the gene pool. There’s also natural selection. You can’t mate if you’re dead, and winters on those Scottish islands can be rough. 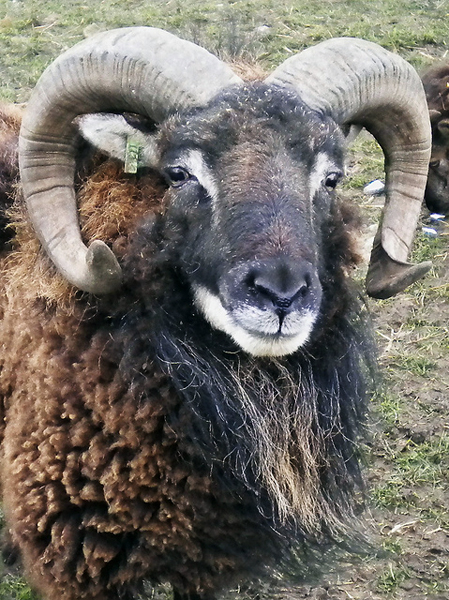 I’m about 60% sure that this is a Soay sheep. Maybe 70%. Anyway, normal male horns look like this. Image: Stephen Jones.

As you might expect, when it came to mating, HoPHoP males fared the worst, fathering fewer lambs on average than either Ho+Ho+ or Ho+HoP sheep. But the Ho+Ho+ males had a problem too; they were more prone to dying. So while they sired more offspring in a given mating season than the small-horned HoPHoP males, they were less likely to be on hand for another round once the snow melted. Sexual selection favored the Ho+ allele, but natural selection was kinder to HoP.

And while males with two identical copies of either allele were disadvantaged in one way or the other, sheep with the Ho+HoP combo pack had neither of these worries. Their reproductive success was similar to that of the virile Ho+Ho+ sheep, and they were no more likely to bite it during the winter than hearty HoPHoP animals. When both reproduction and survival were considered, the males with the mix-and-match genes had a higher overall fitness score than those with two identical alleles.

This kind of pattern is sometimes referred to as the heterozygote advantage (a heterozygote being an individual with one of each allele) and it can maintain genes that are in some cases disadvantageous or outright harmful. The most famous example is the gene the causes sickle cell anemia. It takes two copies of the sickle cell allele to cause the disease. But the same gene also protects against malaria, and only one copy is needed to reap that benefit. Thus individuals with a single copy of the sickle cell allele get all its pros and none of its cons, and thus the gene sticks around despite being detrimental to those who end up with two copies of it. You probably learned about this in the genetics chapter of your high school or college biology class. The reason is that there aren’t a ton of other demonstrated examples of the heterozygote advantage out there, which is what makes this current study important. The heterozygote advantage may account for other seemingly counterintuitive examples of genetic variation as well, so we can look forward to having more textbook example options as scientists continue to uncover the genes behind these traits.

Of course there are other factors that can contribute to genetic variation. For instance, a particular allele may be favorable for one sex within a species while being damaging to the other. Though this didn’t seem to be the case for Soay sheep. The study found no effect on female fitness from different configurations of RXFP2 alleles. 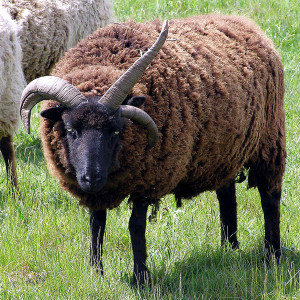 Probably NOT a Soay sheep. Just an illustration that there are worse fates in life than small horns. Image: Jim Champion.

How exactly this single gene goes about affecting male survival is still a mystery. The authors note that differences in behavior amongst the variously horned males might be part of the equation. Large horned males expend far more energy procuring and defending their conquests than scurred males, who just sneak in for a quick romp when the opportunity arises and then get back to eating and laying about. Though one wonders why we don’t then see lower survival in the reproductively successful Ho+HoP group. Additionally, the study found no survival disadvantage in normal horned HoPHoP sheep (recall that only about half of this genotype ends up with scurs). And why do only half of HoPHoP males get saddled with scurs? Who knows. Real world genetics is a lot messier than Punnett squares would lead you to believe. Outside of Mendel and his peas – which were specifically chosen to minimize variables – this is about as clean as it gets. So savor the moment.