Anthropologist Ben Orlove reports from Bhutan. “Of the things that my colleagues and I hoped to see on our trek, only one was missing … ice.”

This article is republished with permission from GlacierHub. This post was written by Ben Orlove, an anthropologist who has conducted field work in the Peruvian Andes since the 1970s and has also carried out research in East Africa, the Italian Alps, and Aboriginal Australia. His early work focused on agriculture, fisheries and rangelands. More recently he has studied climate change and glacier retreat, with an emphasis on water, natural hazards and the loss of iconic landscapes.

Of the things that my colleagues and I hoped to see on our trek in Bhutan, only one was missing: ice. Ed Cook and Paul Krusic, both tree ring scientists, found the groves of ancient trees they had planned to take sample cores from, and our trails led us to the villages where I talked with farmers about weather and crops, thanks to interpreter Karma Tenzin. But though I kept checking the summits of the mountains that towered over us as we hiked along valleys and climbed over ridges, no glaciers came into view.

Our trek started in Chokhortoe, the home village of our horsedriver Renzin Dorji, nestled on a small bench of flat land near a river. Forested ridges rise up sharply on both sides of the river, protecting the valley from the harsh winds of the Tibetan plateau but also blocking the highest snowpeaks from sight. I had thought that we might see glaciers when we ascended the slopes from the valley. 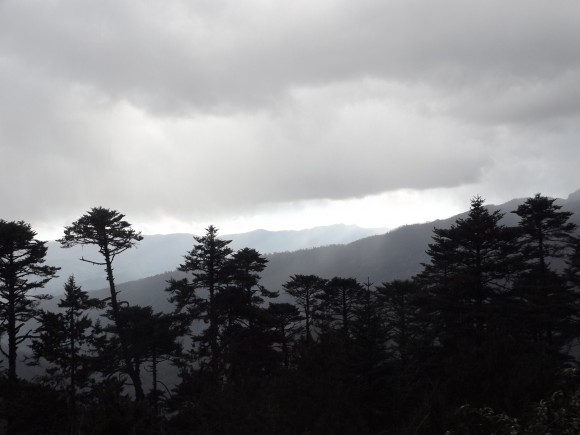 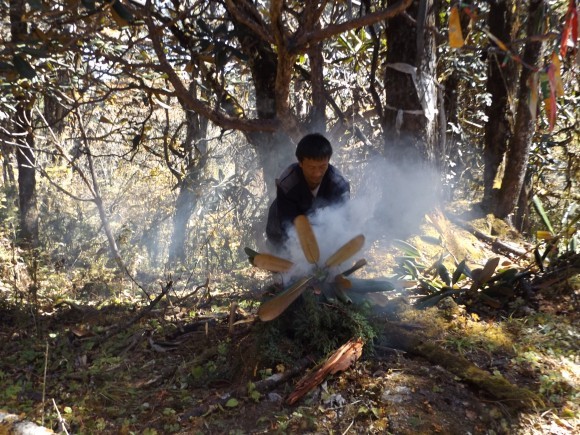 Renzin Dorji burning juniper and rhododendron as an offering at the pass of Ko-la. Photo credit: Ben Orlove

In fact, most of the local people I met had never seen a glacier. They live in villages like Chokhortoe, located in sheltered valleys where they can grow their crops, hardy varieties of wheat and barley and buckwheat. From the vantage point of these valleys, the glaciated crests of the Himalayas are hidden behind by mountain ridges. When the villagers travel to sell their crops, they generally head south towards the market towns closer to the border with India at lower elevations. The gates still stand which mark the old trails north to Tibet, but that trade ended with the Chinese occupation of Tibet in the 1950s. And the population growth and economic expansion in India has led to strong demand for Bhutanese crops in that country. Even our horsedriver, Renzin, had not travelled to the northern areas where the glaciers could be seen. 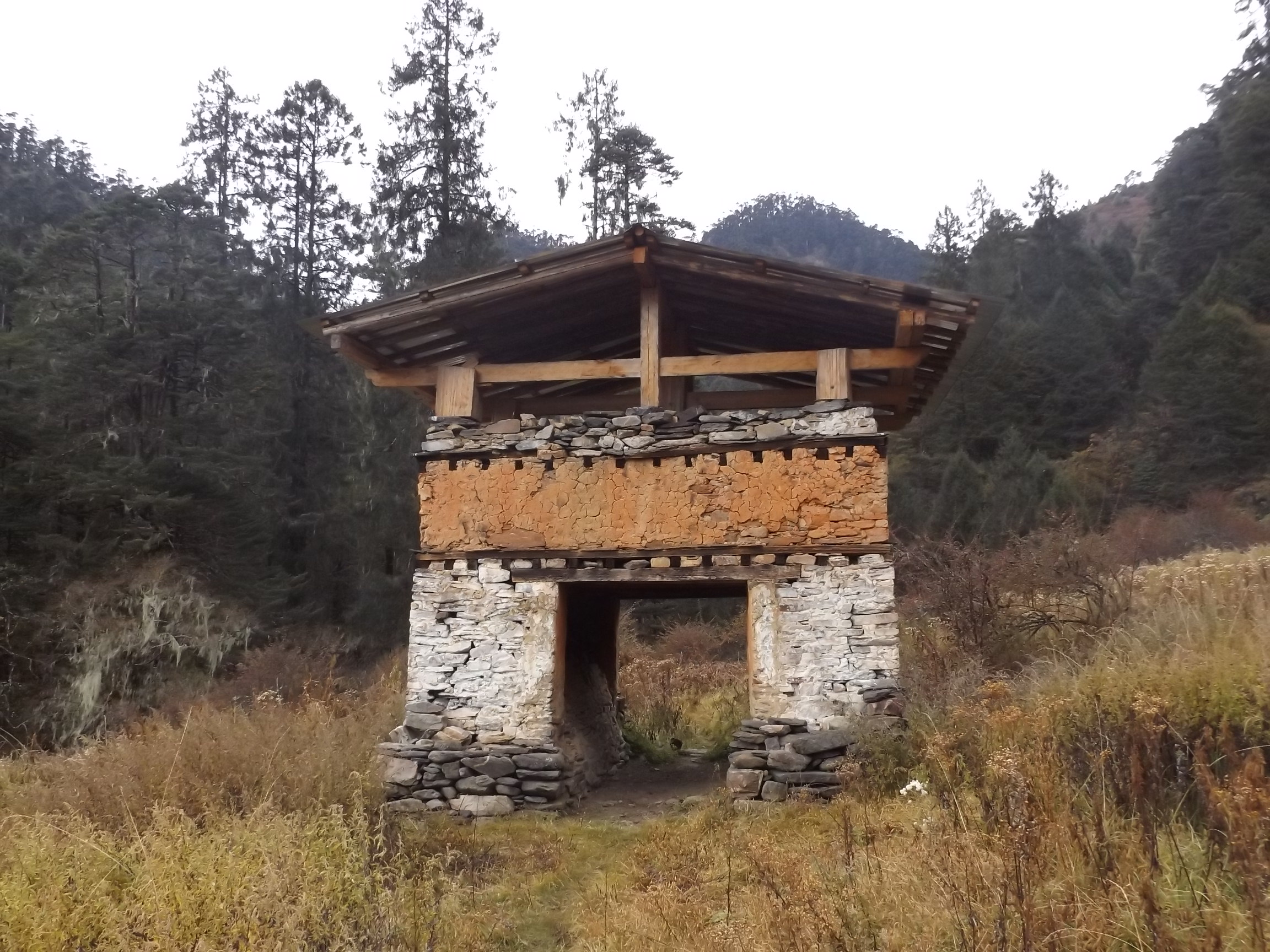 Only one villager, Sherab Lhendrub, had stories to tell me of the glaciers. A man in his late sixties, he has decades of personal experience to draw on. He used to travel to high pastures late in the spring, to bring a season’s worth of supplies to the three herders who cared for his yak herd. The herders would stay up at the summer camp for months, milking the female yaks and making butter and cheese. Each year he went up a second time, in the fall when the heavy snows and hard frosts were approaching, to assist the herders in closing up the summer camp and accompanying them on the two-day trek down to the winter pastures at a lower elevation. In his many years of travel, he observed the gradual reduction of the vast white cap of ice that covers the jagged peaks of Gangkhar Puensum, the Three White Brothers Mountain, which is also the highest unclimbed summit. 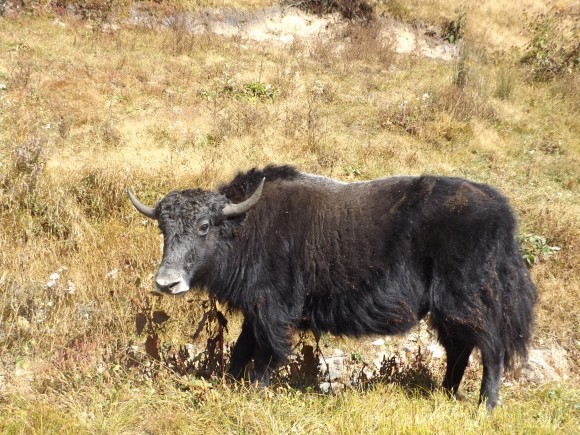 This glacier retreat has had not just visual, but practical consequences as well. Sherab told me that Monla Karchung, the White-covered Mountain Pass, retains its name but not its color. More importantly, it is now difficult to cross. Herders used to walk confidently across the glacier to reach a distant valley, trusting in the yaks’ uncanny ability to sense crevasses under the snow. Now the herders walk gingerly across the slippery black boulders, if they cross the pass at all. Sherab stood up and pantomimed someone walking carefully as he told me the story of a herder who lost his footing there. The man’s lower leg slid down and wedged between two boulders. The momentum of the fall pitched his body to one side, snapping his shinbone in two.

Sherab sold off his yak herd a few years ago, when he felt he was growing too old to continue the climbs to the high pastures. His son, who supplements the income from his farm with the earnings of a store and the occasional hire of his pick-up truck, is unwilling to make these arduous trips. Sherab was having difficulties finding herders to hire for the summer season as well. Many young people have become accustomed to cell phones and motorbikes, he explained. They are less willing to tolerate the weather in the high camps, which is cold even in summer, and the long hard days of work without any break. Even though butter and cheese from yaks are highly prized, and their meat is believed to confer strength on the people who eat it, fewer people in the region are herding them. Bhutan was losing not only glaciers, but also yak herders – and their yaks. 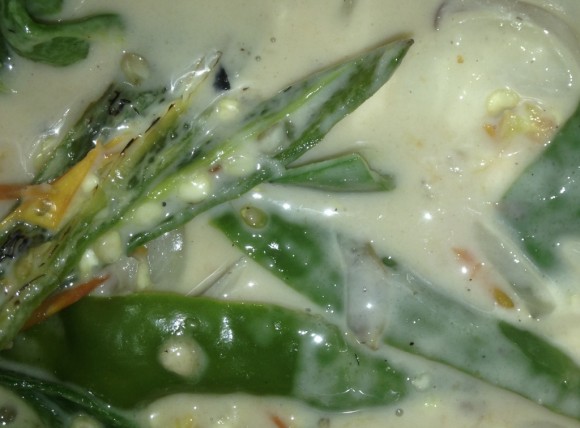 I was excited to discover that the next section of our trek would take us past the winter yak pastures, thousands of feet lower than the summer pastures but still well above the villages in the valleys. I quickly learned to recognize these camps as we came upon them: clearings in the forests an acre or more in size, filled waist-high with plants that had sprung up in the summer rains. Each camp had a small shack or a simple wooden frame over which blankets or a tarpaulin could be thrown, and each had a water-source nearby, a small trough placed in a stream that ran down a hillside. Most had a few poles with prayer-flags attached to them. 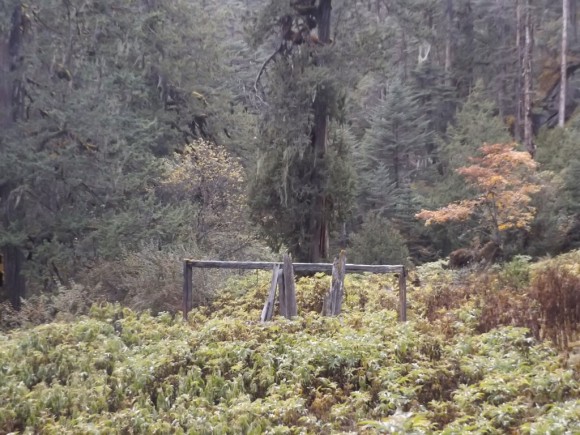 I would have loved to see the yaks returning to these camps, but that would not take place for several more weeks. But I could take advantage of the emptiness of the camps. I examined the charcoal in the fire pits in the shacks and walked the perimeter of the meadows to locate the posts where the herders would place branches to fence their animals in. I could tell that most of the camps were still in use. I conferred with the others to confirm that a few of the camps were abandoned. We could see the saplings, several years old, which had grown up in the absence of any grazing, and the heaps of old boards that were the remains of former shacks.

One camp that we visited on the third day of our hike had me puzzled. I wasn’t sure if it was abandoned or not. The thick, dry vegetation looked more than a year old, and the prayer flags were more tattered than any I had seen elsewhere in Bhutan. I followed the gurgling of water, and found a wooden trough to one side of a stream. I discussed this evidence with Ed and Paul, thinking that this meadow might be one more indication of the decline of yak herding. As we discussed this matter, Renzin the horsedriver came up. He recognized the tall plants right away. Their name in his language, Sharchop, is shampalí. It does dry quickly after the rains end, he said, but the yaks would eat it anyway, and they would relish the new leaves that were growing at the base of the dried stems. The case was closed: the camp had been used recently, even if the prayer flags were neglected and the trough needed a small repair. In this small corner, at least, the centuries-old livelihoods that have allowed local residents to maintain close contact with the glaciers remain alive. 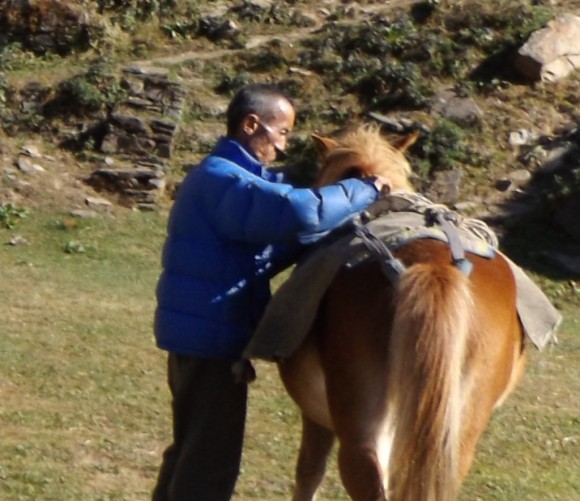