Here are the best Flickr photos we could find showing what it was like to live through Irene this weekend.

As Hurricane Irene roared up the U.S. East Coast over the weekend of August 27-28, 2011 – leaving at least 15 people dead from Puerto Rico to New York, causing an estimated $3 billion in damage and cutting electric power to more than four million homes and businesses across the eastern U.S. (according to SFGate) – many professional as well as amateur photographers helped document the event. We’ve posted some of the best of the Flickr photos below.

August 26. Irene moving up U.S. coast. This image was taken by Mattb4rd on Flickr at Amelia Island, the southernmost of the Sea Islands, a chain of barrier islands that stretches along the East Coast of the United States from South Carolina to Florida. Irene passed here on August 26, 2011. 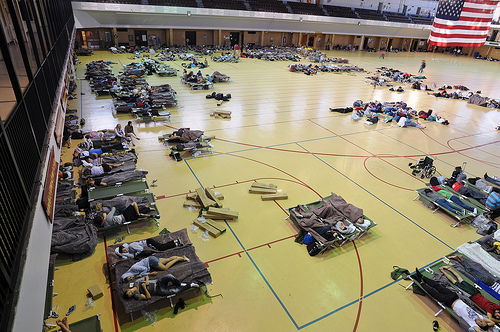 In the second photo above, more than 600 evacuees from Ocean City, Maryland were housed in the Maryland National Guard’s Fifth Regiment Armory in Baltimore, Maryland. This is the view on August 26, 2011 just as the evacuation began. The evacuees are mostly young adults on work and student visas. The students were evacuated as part of the governor’s declared state of emergency in anticipation of extreme weather conditions brought on by Hurricane Irene threatening the East Coast.

August 27. New York City. Here are three views of New York City on August 27, 2011 as Irene was approaching. These are from Eguchi Shintaro’s photostream on Flickr. By 8 p.m. on August 27, when the last of these three was taken, the streets looked deserted.

August 27. Rain over Brooklyn. This video is by Arvind Grover on Flickr.

Ryan Britton is an EarthSky Partner. He joined EarthSky in 1995 and played a key role in establishing it as a powerful science brand. In 2003, Ryan's leadership helped EarthSky earn a Public Service Award from the U.S. National Science Board - advisors to the U.S. President and Congress.