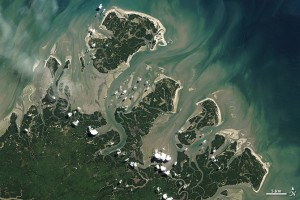 The Thematic Mapper on the Landsat 5 satellite captured this 2006 image of previously unrecognized barrier islands along the northeast coast of Brazil, midway between the mouth of the Amazon River and the coastal city of São Luís. Brazil has the world’s longest continuous chain of barrier islands—54 in total, extending more than 355 miles along the Atlantic coast. (Credit: NASA’s Earth Observatory)

Thank you! Your submission has been received!
Oops! Something went wrong while submitting the form.
END_OF_DOCUMENT_TOKEN_TO_BE_REPLACED