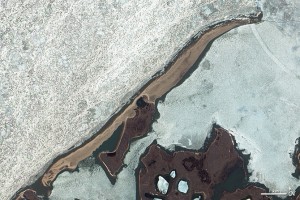 The Advanced Land Imager on NASA’s Earth Observing-1 satellite captured this image of a barrier island facing the Beaufort Sea, on the northern edge of Canada’s Northwest Territories. The overall thawing of Arctic climates, as well as increasing sea level rise, has caused barrier island shorelines in this region to erode more rapidly than elsewhere in the world. (Credit: NASA’s Earth Observatory)

Thank you! Your submission has been received!
Oops! Something went wrong while submitting the form.
END_OF_DOCUMENT_TOKEN_TO_BE_REPLACED