Bats do it, bonobos do it (share food, that is)

Some animals get by with a little help from their friends, while others rely on the kindness of strangers.

Selfish behavior abounds in the animal kingdom, and well it should. In a world of too few resources and too many predators, individuals who dilly-dally with things like “helping others” and “sharing” risk having their genes swiftly removed from the pool. Our own species takes pride in its penchant for seemingly altruistic acts, but much of this may be driven by culture. Parents make an effort to teach children to share, but these lessons can be a hard sell. Though my manners have since improved, 6-year-old me was pretty irate when grown-ups suggested I offer some of the contents of my Easter basket to another child. (How was that kid’s lack of candy my problem?) Yet despite the fact that from a basic evolutionary standpoint it’s better to receive than to give, sharing occurs in other animals too. So what’s in it for the givers?

Quite a bit, actually. Some acts of sharing and cooperation offer immediate benefits to helpful individuals. Hunting in packs, for instance, can improve chances of a successful kill, even though it means a smaller portion for each hunter than if they’d gone it alone. And in closely related societies such as those of certain insects, helping enough relatives survive and reproduce can add to an individual’s “inclusive fitness” (that is, how many of the next generation share that individual’s genes, be they direct children or indirect nieces and nephews and what have you). What’s interesting then, isn’t so much that animals share, but whom they choose to share with, especially when the sharing isn’t between relatives or even members of the same pack. 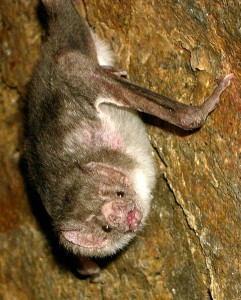 The common vampire bat (Desmodus rotundus) is a famous example of non-human sharing of resources. Vampire bats roost in large groups, in which some bats are relatives while others are merely neighbors. Individual bats hunt nightly for blood, but they don’t always succeed.  A couple off nights can mean big trouble since the little guys will starve to death in just 70 hours. On such occasions, roost-mates may come to the rescue by regurgitating some of their own recent blood meal to feed the hungry bat. Not the most appetizing scenario, but assuredly better than death.

In a study recently published by the Proceedings of the Royal Society B, scientists spent two years working with captive* vampire bats to sort out who was barfing up blood for whom. By fasting individual bats and then returning them to roost with their well-fed neighbors, the researchers found that while relatedness did have some impact on food sharing, the much larger predictor was previously received food donations. Bats were more likely to share food with another bat that had done the same for them in the past. There was a strange selectiveness to the sharing. Not only did some fed bats refuse to help a particular hungry neighbor, the fasted bats themselves were observed to reject offers of assistance from certain individuals. The sharing cliques were consistent over time and food sharers were also more likely to aid each other with grooming, suggesting that we might be seeing long-term social bonding (“Of course you can have some regurgitated blood, ‘cause we’re pals!”) rather than just quick turnaround deals (“Fine, I’ll help you out this time, but you owe me one.”)

Meanwhile, over at the journal PLoS One, researchers have published the results of another food sharing study, this one using bonobos. Along with chimpanzees, bonobos are humans’ closest living relative. They’re leaner and less muscular than chimps, and their societies tend to be more about sex than violence. Bonobos are also very tolerant not just of non-blood-relatives, but also of strangers. With this in mind, researchers used a series of food sharing experiments to see if bonobos might even be willing to help strangers. What they discovered was that, well, it depends. 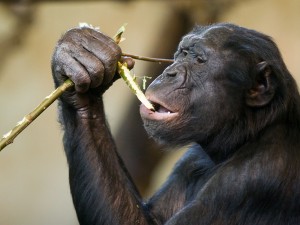 In the first experiments the subject was given the choice between monopolizing an ample portion of food, or sharing the treats with another bonobo(s), who could enter the room only if the subject opened their cages.** The caged potential recipients were either group-mates or strangers. While most of the subjects ate some of the food before bothering with any cage doors (face it, if it were socially acceptable for you to eat 2/3 of your cupcake before offering some to a friend, you would) they did eventually invite another bonobo to join in their feast. Intriguingly, subjects were more enthusiastic about sharing food with strangers than with group-mates. It would appear that, unlike the vampire bats, bonobos preferred to mingle with potential new friends than to favor existing friends.

Another experiment put bonobo subjects in a set-up where they could help another bonobo obtain food that was off limits to the subject, but this time the helping wouldn’t bring the recipient into the same room as the subject. If socializing with new and novel bonobos was the subject’s selfish reward in the previous experiments, there would be no reward in this scenario. However there was also minimal sacrifice (subjects merely had to pull themselves away from a toy long enough to unlock the recipient’s cage), as the food given was not food that the subjects could otherwise have hoarded for themselves (no sharing involved, just helping). Most bonobo subjects in this arrangement still opted to lend a helping hand, and this time they assisted group-mates as often as strangers.

But the bonobos zeal for helping and sharing had its limits. When faced with an experimental scenario in which they could help another obtain food, again without any possible socializing reward, but now with food that was accessible to the subject (i.e., helping would mean giving up some of one’s snack), not a single subject decided to share. They didn’t share with group-mates. They didn’t share with strangers. They just sat there and hogged the food until the experiment was over. Helping is all well and good, it seems, when the cost benefit ratio is favorable. But when costs are high and rewards low, it’s not worth the trouble.

Unlike chimpanzees, bonobos in the wild associate with individuals outside their immediate group, and the authors attribute bonobos’ preferance for strangers to a desire to expand their social network (lacking Facebook, they need to do this via actual physical interaction). Though we should be careful reading too much into the behavior of other species. The language barrier does create some problems in interpretation. Maybe vampire bats are forming lasting friendships and favoring their buddies, but maybe not. Maybe bonobos are eager to meet new folks, but maybe not. Maybe that rodent carcass your cat left on your doorstep is a gift, but maybe it’s a death treat. Hard to say. But it is humbling to know that we’re not the only species willing to share our candy, even with strangers.

* The bats were housed in a large cage at the Organization for Bat Conservation that allowed them to fly around and choose which other bats to associate with.