Cave-dwelling bats are fighting an epic battle against the fungal disease white-nose syndrome. Now, they may be facing another foe — chemical contaminants.

Cave-dwelling bats in North America are fighting an epic battle against the fungal disease known as white-nose syndrome, and now, they may be facing another foe—chemical contaminants. Scientists analyzed the tissues of several dead and dying bats and detected the presence of multiple chemicals including polybrominated diphenyl ethers (PBDEs), caffeine, ibuprofen, bisphenol-A, and triclosan. The new study was published in the journal Archives of Environmental Contamination and Toxicology on August 6, 2015.

White-nose syndrome is disease in bats that is caused by the fungus Pseudogymnoascus destructans. The fungus invades the tissues of hibernating bats and can appear as white tufts of fungal growth around their muzzle, ears, and wings. Bats infected with the fungus wake up frequently during the winter and often die because this abnormal activity depletes their fat stores. White-nose syndrome has already killed over 5.7 million bats across eastern North America. 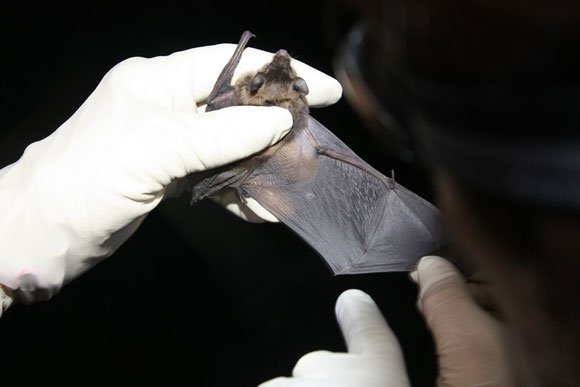 A biologist examines a bat for signs of white-nose syndrome (the small, white spot could be indicative of the disease). Image Credit: Gary Peeples, U.S. Fish and Wildlife Service.

Scientists collected 48 bat carcasses from the northeastern U.S. and had them analyzed for 76 different types of chemicals. The bats had presumably died of white-nose syndrome, although genetic tests for the fungus were not performed.

The bats they studied included the little brown bat (Myotis lucifugus), the Indiana bat (M. sodalist), the northern long-eared bat (M. septentrionalis), and the big brown bat (Eptesicus fuscus). All of these species hibernate in caves throughout the cold winter months and are vulnerable to white-nose syndrome. 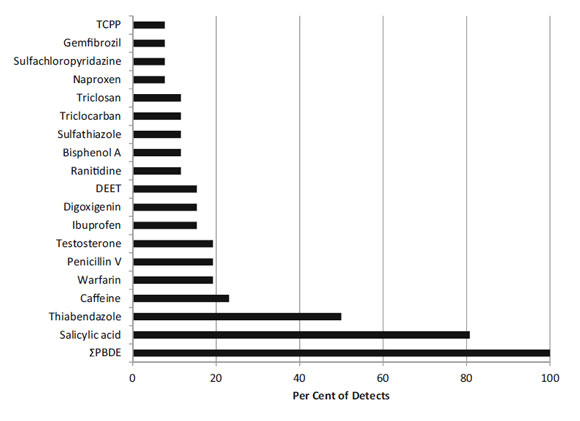 Most of the chemicals detected in bats can be found in the effluents of sewage treatment plants and in streams, rivers, and lakes that have been contaminated by both point and non-point sources of pollution. Exposure to these chemicals likely occurs predominately through the food that the bats eat. These bats are insectivores, which means that they feed on insects such as flies, mosquitoes, beetles, and moths. Insects can pick up the chemicals when they breed in contaminated habitats and then pass them on to their predators, in this case, the bats.

At this point in time, it is not known if these chemicals are affecting the health of the bats. It is possible that some of these chemicals are hurting the bats’ immune systems and making them more susceptible to fungal infections, the scientists say. It is also possible that some of the chemicals such as the stimulant caffeine may arouse bats out of hibernation similar to the fungal pathogen—in effect, creating a one-two punch on their fat stores. The scientists of the new study are hoping to look into these issues in the future.

Anne Secord, lead author of the new study, is the Environmental Quality Branch Chief at the New York Field Office of the U.S. Fish and Wildlife Service. Co-authors of the study included Kathleen Patnode, Charles Carter, Eric Redman, Daniel Gefell, Andrew Major, and Daniel Sparks. Funding for the research was provided by the U.S. Fish and Wildlife Service.

The fungus responsible for white-nose syndrome is thought to have originated in Europe and was first detected in New York during 2006–2007. As of the 2015 hibernating season, white-nose syndrome has been confirmed in bats from 26 U.S. states and five Canadian provinces. The non-native fungus is expected to spread further west in the years ahead. People can help to prevent the spread of the fungus by respecting cave closures and taking care to decontaminate their caving gear between trips to different caves.

Bottom line: Several chemical contaminants were found in the tissues of dead bats that had likely died of white-nose syndrome, a fungal disease. Scientists are hoping to conduct follow up studies to determine if the chemicals can make the bats more susceptible to the disease.