Barnacle sex is even stranger than we thought

Gooseneck barnacles can mate by throwing their sperm into the surf. Commence seamen puns.

For anyone still tempted to believe in outdated urban legends, let me set the record straight on this one: you can’t get pregnant from a swimming pool. Or at least, that’s the case for humans. In the world of barnacle mating things are a bit more complicated. Having to spend their entire adult lives tethered to the same rocky surface, the marine crustaceans lack the maneuvering and mingling opportunities afforded to our species. To make baby barnacles, they’ve had to get creative. And based on new research, barnacle reproduction may be even more peculiar than previously imagined. 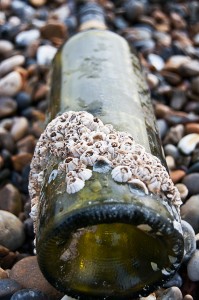 If no good rocks are available, improvise. Image: Tim Parkinson.

Barnacles have a few things going for them in terms of reproductive flexibility. For one, many species are hermaphroditic. That is, they can produce both eggs and sperm. And a batch of eggs can potentially be fertilized by more than one partner. They also have impressively long penises (some of the lengthiest in the animal kingdom, relative to body size). These sprawling sex organs allow barnacles to reach out and engage in something called “pseudo-copulation” despite their sedentary lifestyles. The logistics of the act are simple; the “male” gropes around with his penis until he finds a mate, tosses some sperm into “her” mantle cavity, and there you have it, fertilized eggs.

But there are some problems with pseudo-copulation. Not all barnacles find their way to a rock with neighbors near enough for sperm swapping to be physically possible. Such lonely individuals are believed to reproduce by self-fertilization. However, this is more of an assumption than a direct observation. You find a barnacle with fertilized eggs. No other barnacles are around. Must be self-fertilization.

Another problem is that not all species of barnacles are equally endowed. Such is the case with the gooseneck barnacle (Pollicipes polymerus) the subject of a recently published study in the Proceedings of the Royal Society B. Along with others of their genus, this north Pacific species just doesn’t measure up to barnacle genital expectations. They’re also a bit shy in the laboratory. Not only have scientists failed to catch gooseneck barnacles in the act of self-fertilization, they haven’t even witnessed them partaking in pseudo-copulation (in the lab or in the wild, for that matter).

What gooseneck barnacles have been seen doing is leaking sperm into the water. This led researchers at the University of Alberta to wonder if the barnacles might be engaging in “spermcast mating”. While it’s documented in other marine animals that don’t get around much, spermcast mating – in which males basically deposit sperm into the water and hope for the best – was not considered to be a reasonable option for barnacles. 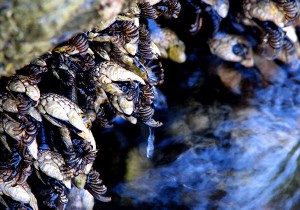 To test their hypothesis, the team sampled close to 600 gooseneck barnacles and also collected 37 fully isolated barnacles (defined as more than two body lengths from the nearest neighbor, well out of penis range for this species) and another 34 individuals from “isolated pairs” (i.e., only close enough to one potential sexual partner). They measured penis lengths and distances from nearest neighbors, and tallied the number of fertilized individuals (those carrying embryo masses). In the collected barnacles, they compared genetic markers of the fertilized embryos with those of the likely parents (either completely solitary barnacles, and presumably monogamous isolated pairs).

Results confirmed that penis size in goosenecks was indeed smaller than your average barnacle. They also showed that fertilization rates fell as distance from neighboring barnacles increased (not what you’d expect if self-fertilization were the norm), but that some individuals too far away for pseudo-copulation had still somehow procured sperm for their eggs. More important were the results of the barnacle paternity testing, which revealed that all of the completely isolated individuals were carrying embryos with at least some non-parent DNA, suggesting that they had captured sperm from the water to fertilize their eggs. And what about the isolated pairs? Despite having one neighbor available for pseudo-copulation, 24% of these barnacles still managed to pick up some extra sperm on the side.

So contrary to what science has believed for over a century, spermcast mating in barnacles does exist, though it remains to be seen if this occurs in other species (particularly in those less constrained by their undersized appendages). To what extent it’s a mating strategy is also unknown. The authors point out that since they only did genetic analysis on isolated individuals and isolated pairs, we still don’t know whether spermcast mating is common in the species as a whole or just a desperate last resort for barnacles living on less populated rocks. It could even be a byproduct of the process of pseudo-copulation, which the authors describe as “sloppy”. Perhaps gooseneck barnacles are just prone to leakage, and one barnacle’s loss is another barnacle’s gain.