Living in ice is no easy feat, but ice worms make it work. Part of the secret to their survival on glaciers lies in a symbiosis between worm and bacteria. 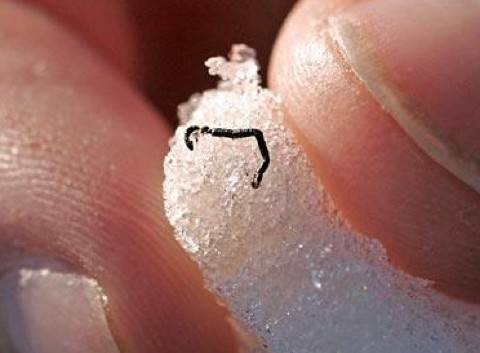 This article is republished with permission from GlacierHub. This post was written by Manon Verchot.

Deep in their gut, Alaskan ice worms have an average of 10,000 individual bacteria, including one species that until recently had never been discovered, as researchers from the Department of Biological Sciences at the Tokyo Institute of Technology found.

Living in ice is no easy feat, but ice worms, relatives of the earth worm and members of the annelid phylum, make it work. The tiny worms burrow through many North American glaciers, surviving in temperatures that would kill most animals. Ice worms cannot be found anywhere else in the world and researchers suspect this is due to the fact that ice worms can only exist within crawling distance of glaciers. Still, some ice worms live on glaciers that were never connected by the Cordilleran ice sheet, posing an interesting conundrum for scientists.

While these one-inch worms can manage living conditions that don’t favor life, they don’t do well in temperatures above freezing. Just a few degrees above freezing is hot enough to kill the creatures, and it’s not a nice death; ice worms will literally melt when it gets too hot, their membranes breaking down. But luckily for them this doesn’t happen too often since they can safely burrow into the depths of glaciers, where temperatures remain fairly constant. They feed on algae that grows on glaciers as well as other forms of organic matter. 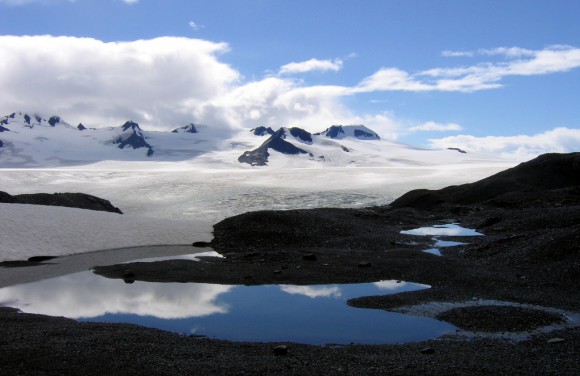 Their metabolism is adapted to freezing temperatures and they can go for long stretches without eating – a handy skill in an environment where food can be difficult to find and nutrients are hard to come by.

Part of the secret to ice worms’ survival on glaciers lies in a symbiosis between worm and bacteria. Scientists trekked to the Byron Glacier and Harding Icefield in Alaska where they scooped up worm samples and began their painstaking analysis of contents in worm innards.

Some of the worms they collected were stored in a solution at -30 degrees Celsius and later dissected, while others were placed – alive – in Petri dishes filled with double distilled water and fasted for as long as two months to flush out any bacteria that were transient inhabitants. After the fasting period, scientists took scalpels to the worms and looked at what was left inside. The starvation process also replicated conditions worms face when food resources are low.

Researchers know that a worm-bacteria symbiosis allows worms to get digestive assistance from their bacteria helpers. With so few food resources available, worms need to get every last nutrient out of their food–mostly hardy algae that grow on the ice surface. Bacteria help break down tougher food molecules that are harder for worms to digest. Meanwhile, bacteria get a (relatively) toasty home in their worm hosts and get meals delivered to them via the worm’s foraging activity.

By separating two worm samples – one that was fed and one that was starved – the researchers were able to discern which bacteria lived inside the worms, and which bacteria got a ‘free ride’ through worm guts and then came out the other end. Any bacteria that were left inside ice worms after months of starvation were likely to be permanent residents in ice worms rather than just passing through with the most recent meal.

Some of the bacteria microbiologists found in ice worm innards are the same as ones that can be found in soil and other species of worms, but that can’t be found on glacier surfaces, which could suggest that ice worms were not originally ice-dwellers. Earthworms have gut bacteria that help them digest organic matter in soil. At the same time, this allows them to play a role in mixing soil, which has cascading ecological benefits for other species and for the worms as well.

As the ice worms evolved from their terrestrial worm forebears, bacteria would have helped them take advantage of algae on the ice surface by helping the worms digest tougher molecules. This suggests bacteria played a role in the evolution of ice worms, and even that bacteria would have evolved at the same time, making them unique to ice worms.

Among these bacteria, the researchers discovered a new species now named Mollicutes phylotype Ms-13. These bacteria do not exist on the glacier surfaces, which suggests worms are passing the bacteria between one another through a process of eating each others’ feces.

Researchers can use these findings to conduct future research on the role ice worms and their gut bacteria play in shaping a glacial ecosystem and perhaps get some clues about why ice worms only exist in specific parts of North America.