Chari Pattiaratchi on the underwater river off Perth’s coast

How can a river flow in the ocean? Underwater rivers saltier than surrounding sea water. That means the water is more dense and sinks to the ocean bottom.

In June of 2011, a team of oceanographers announced the discovery of an underwater river off the coast of Australia, near the city of Perth. Researchers said it was the first time an underwater river had been glimpsed in such warm waters. EarthSky spoke to Dr. Chari Pattiaratchi, the ocean expert who led the team of discovers at the University of Western Australia. Their findings appeared in the journal Geophysical Research Letters. Dr. Pattiaratchi said:

These underwater rivers, are common near the poles, as a result of ice formation. But this is the first time these processes have been discovered in sub-tropical regions. And it’s the first time they’ve been found to be present throughout the year. 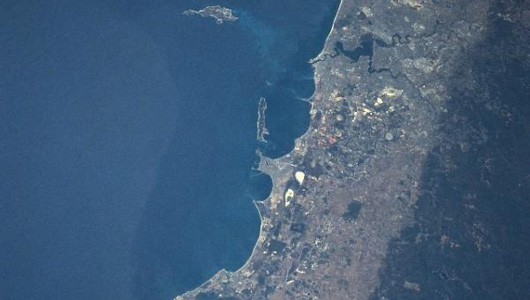 The Australian underwater river found by Dr. Pattiaratchi runs along the ocean bed off the coast of Perth.

Australia is the driest continent. So, to go with the dry continent, there is high evaporation. That means that the water near the coast, especially in the shallow water, becomes more saline than the water offshore. And more saline is more dense. So this water than sinks to the bottom, and then it goes underwater and exits the continental shelf. And that’s what we call underwater rivers.

He discovered this river with the use of an ocean glider, which he described as a kind of hi-tech water robot that can sense – 24 hours a day, seven days a week – minute changes in water chemistry. The gliders transmit their data to Earth-orbiting satellites.

An underwater glider in the Sargasso Sea. Image Credit: Freezingmariner

I have been working in this area for 22 years, and we haven’t actually seen [underwater rivers] because we’ve been using the traditional way of doing oceanography. With the ocean gliders, we get much better coverage 24/7 and very high resolution, and that’s how we made this discovery. Usually we would go out in a boat when the weather is good, and we’d put some instruments in to find out the water properties. Quite often, we have missed them.

Dr. Pattiaratchi said he suspects that dozens of underwater rivers cascade all along the coast of Australia. He added that these rivers aren’t rushing and gurgling, like rivers on dry land. Instead, they snake along the ocean floor more like lava flowing from a volcano. Pattiaratchi said the underwater river near Perth moves at a rate of about 1 kilometer (about a half-mile) a day. It might travel outward to sea for more than 100 kilometers (60 miles).

They’re quite thick, so they can extend almost half of the water column. So if the water depth is 40 meters (about 130 feet), this water can be up to 20 meters thick. It has different properties to water which is normally present on the [continental] shelf. They have a higher salinity. Evaporation is really strong from our late summer to autumn period. And then you go into winter, and the water starts cooling. So you have the cold water and the higher salinity, which makes it even more dense. It becomes a stronger flow.

Various underwater rivers have been discovered in different spots around the globe. Dr. Pattiaratchi said what’s unique about his discovery is that the river moves through such warm waters. The discovery should help scientists find out how underwater rivers function in a sub-tropical setting. Previous studies have focused on underwater rivers in glacial environments – that is, in much colder waters.

A previous study provided this infrared picture of an underwater river beneath the Black Sea. Image Credit: Rick Hiscott and Ali Aksu from Memorial University, Newfoundland via Our Amazing Planet

However, another notable warm-water underwater river was found beneath the Black Sea in 2006. The Black Sea underwater river is fascinating because it cuts deep into the seafloor, much as rivers on dry ground wind through a landscape. If it were located on land, it would be the sixth-largest river in the world.

He explained that underwater rivers are important to study because they can help scientists understand how pollutants are carried from shore to the middle of the ocean.

It’s really important, because one of the things we have to take into account is that vis a vis human activity, we discharge a lot of material to the coastline. Normally it goes either north or south. It remains within the coastal areas for a long time. But these rivers have the ability to take it away from the coastal zone to the deep ocean.

He said many consider this to be a good thing, because pollutants may be less harmful if they’re diluted in the open ocean, as opposed to being concentrated near the shore.